The Will Mortimer Intervi...

The Will Mortimer Interview: NIGEL GEARING 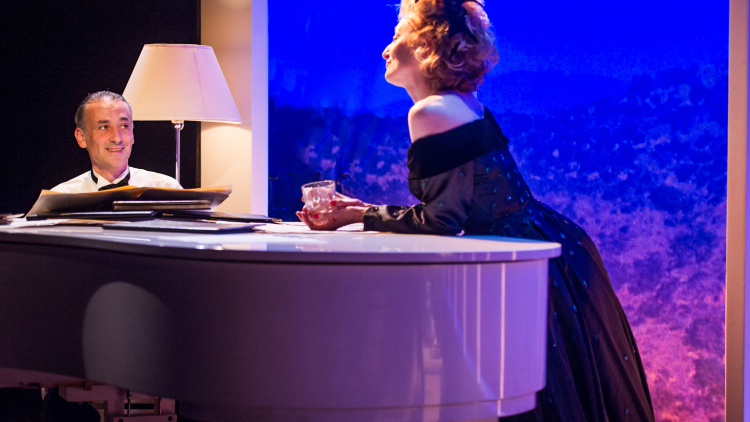 Hampstead Theatre’s Literary Manager, Will Mortimer, talks to Nigel Gearing, who has adapted Blue Heart Afternoon for the stage:

Will Mortimer: Can I start by asking, what’s the play about?

Nigel Gearing : Let me start by saying where it is and who’s in it perhaps. It’s set in Hollywood, in LA, in 1951, in the rented by the studio apartment of a film composer, who the year before has won an Oscar for a song. It’s a play with four characters in it who I guess represent different ages. He’s sort of middle-aged, then slightly older is a figure who is to some extent based on Marlene Dietrich, who is called Diva in the play. Book-ending these two is an elderly studio producer, referred to as the Janitor, and the youngest member of the company is called the Ingénue – they’ve all got generic names out of a kind of whim of mine when I was writing it if you will – and the Ingénue the year before won Miss Texas 1950, so she’s 20 years old or something. It takes place during the time of the McCarthy Witch Hunts, which were turning their attention to Hollywood and celebrities and the movie picture industry and the play takes place across an afternoon. It’s called Blue Heart Afternoon because there is a song which the guy had won an Oscar for, which we actually never hear in the play, and the song was called Blue Heart Afternoon . It takes place across an afternoon and perhaps more importantly and less obviously, it’s the beginning of the afternoon of the American century in 1951 and what one might think of as the afternoon of a certain American idealism. That’s to say people who were, for example, anti-fascists before the war came to be seen as Communists after the war and were attacked as such. Also in the case of the Songwriter and Diva, they are both in to the afternoon of their careers and are aware of it. For the Songwriter, three years later you’ll get Bill Haley and rock and roll which threatens the kind of song writing he does, which is much more the Frank Sinatra type. He is, to some extent, based on Harold Arlen who had an affair with Dietrich. Harold Arlen wrote the music for The Wizard of Oz , things like Somewhere Over the Rainbow , but he also wrote some marvellous songs like Blues in the Night , One For My Baby and The One That Got Away and so on.

WM: You talked about how you’ve given your characters these generic names like Songwriter and Diva, but as you say they are loosely based on Marlene Dietrich and Harold Arlen, how much truth is in the play? Do the generic names help you to distance it and make it a piece of fiction?

NG: I think that’s probably what it was about for me. I could have just given them fictional names. I guess the question that will be asked is, well is this Dietrich and Arlen. I have written in the past, and have had stuff produced, that is very specifically biographical; for Channel Four a thing about Elgar, another thing about Janis Joplin, a wrote for Paines Plough about Hanns Eisler who was also questioned by the House Unamerican Activities Committee. I think the slightly muddled answer to this question, although I had done biographical stuff, it really was only the starting point for me (for Blue Heart Afternoon). There are almost by accident details that correspond with Harold Arlen. One of the cast pointed out to me the other day that he was indeed born in Buffalo, which I’d completely forgotten about, as had the Songwriter in the play. I think I didn’t want to follow that biographical line any further down then the point of departure, and they both represented to me more specific types. Dietrich wasn’t alone in this, she was the type of the European who came to America, as indeed is the elderly producer in the play, Harold Arlen was indeed a Jewish songwriter, as is the character in this. But it was more the profile than the detail that interested me in this.

WM: They’re all character who, at this moment, bring with them a lot of history. There’s a huge amount of history that has happened in the two decades prior to this play beginning that these characters come to represent. And the Ingénue is trying to play them at their own game, but it’s interesting as that game won’t exist, it’s coming to and end in some way. She’s representing something new, but I don’t think we know what that new quite is. It’s an interesting moment of flux.

NG: I think actually a lot of things fell in to place for American society and history in the 50s. I began writing this play in the noughties under Bush, when Iraq was happening. And either Bush or Cheney said that if you’re not with us then you’re against us, and I thought, hang on, I’ve heard this one before. And I was interested then in the space that democratic society allows for liberal dissent. I think Bush and Reagan and so on do represent a continuity with some of the worst excesses of the 50s. I mean Nixon built his career to some extent with his involvement with HUAC.

WM: I suppose it’s that idea that comes out in the play of your identity, who America is questioning you to be, who you are…

NG: What is an American, what is Unamerican?

WM: And is it a positive thing to be whatever you are being told you are. I wanted to ask you, you’ve been in rehearsals, how has the script evolved in the past three weeks?

NG: Tamara (Harvey, the director) and I did a lot of work looking at the script. I think the answer is that there isn’t an awful lot of new material. There is a certain amount of cutting, but there’s been a redistribution of the weight within the play and obviously when you move things around structurally it also affects meaning. Just to give you an instance, there’s a speech by the elderly producer about first coming to America and having to jettison all the European culture he brought with him and start again, and by moving that to the beginning of the play it obviously shifts the perspective in which the play is viewed I think.

WM: That’s interesting because the beginning of a play is always where you can lay out your statement of intent and it’s a delicate thing to play with. Having the cast take ownership of the roles, has that pushed the play in any particular direction?

NG: Not really, I mean I’m slightly embarrassed by this, but the Ingénue, Miss Texas of 1950, if you look at the script, even the published script, I had envisaged a very big breasted red head. We’ve got a fantastic actress playing it, but she ain’t that – she would be the first to say – so there have been script changes to accommodate. Like jokes about that have now been transmuted to other aspects.

WM: But I suppose when you have slightly different casting to what is in your head as a writer it can be interesting.

NG: Yeah, again, the guy playing the producer is very, very good, but I’d imagined the character as short and big and bald, and we’ve got a very thin 6 foot 2 guy who’s great. Again just minor adjustments, but it doesn’t really change anything as far as I’m concerned.

WM: Have the actors, particularly those playing Diva and the Songwriter, have they delved in to their Marlene Dietrich and Harold Arlen counterparts or have they stayed away from that?

NG: I don’t know, I think so, there are books lying around but I think it hasn’t been homework that they’ve got to research that. A more general answer is that one leaves it to the actors and if they want to do it they do, and if they don’t, they don’t.

Blue Heart Afternoon is on Downstairs until 12 May.