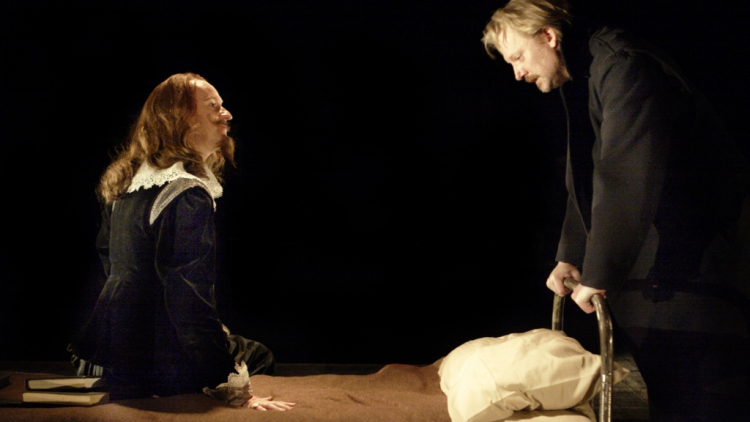 ‘After plays about Anne Boleyn and Abelard and Héloïse, Howard Brenton is turning into the history man. But I have no complaint about that, since he has chosen the best models. Schiller has clearly influenced this richly stimulating play about the last days of Charles I, in that we get lots of politics plus a totally fictitious meeting between the king and Cromwell. And, like Brecht, Brenton also uses the past as a means of examining the present.

That comes out with startling clarity in Howard Davies’s excellent production, since the king is dressed in Van Dyck finery, and everyone else sports modern dress: a deft way of underlining the point that Charles I appeals to a romantic past, while his opponents are struggling to achieve a new Jerusalem. But, though Brenton clearly sees the events of late 1648 as a vital step on the road to parliamentary sovereignty, he makes no bones about the chaos involved. The vote to put the king on trial is only achieved by means of a military coup. And there is a heated division among Charles’s critics, ranging from hardliners like General Ireton to anti-regicides like Lord Fairfax, with Oliver Cromwell somewhere in the middle.

The beauty of Brenton’s play is that, as with so many of Brecht’s, there is a conflict between theory and action. We are, I suspect, meant to sympathise with Cromwell as a man of religious conviction torn between the need to execute the king and the desire to conciliate with him; and Douglas Henshall brings out to perfection the character’s smouldering internal divisions. In reality, however, Cromwell strikes me as a thundering hypocrite who claims to be an instrument of God’s will, while craftily packing the commissioners who will pass sentence on the king with yes-men. Charles I, in contrast, is at least consistent in his belief that he is divinely appointed; and Mark Gatiss, without diminishing the monarch’s arrogance, also movingly captures the dignity of his downfall, and reinforces the Shakespearean point about the essential solitude of kingship.

In short, Brenton’s play has the strange effect of making us welcome the move towards parliamentary supremacy while inducing sympathy for the regal victim. I suspect Brenton’s real hero is the Leveller, John Lilburne, who wants power for the people without regicide, and whom Gerald Kyd endows with a fiery intensity. Simon Kunz makes a persuasive case for Lord Fairfax who, though the designated head of the army, shrinks from the act of execution.

But the real pleasure lies in seeing a pivotal moment in English history presented with such fervent dramatic power.’