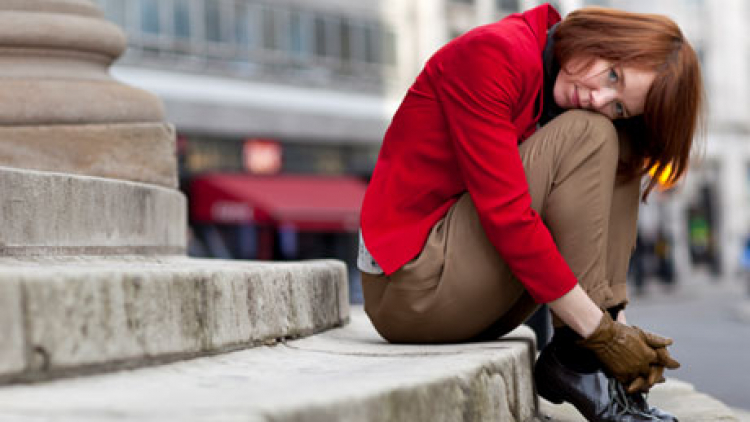 The South Riding star on the dearth of funny roles for women, dance-offs and why she’s only ever spotted in Waitrose. Interview by Elizabeth Day in The Observer (Photograph: Teri Pengilley in The Observer)

Did you have a nice Christmas?

It was lovely. We were at home in London and then up in North Yorkshire, where my best friend has just moved on to a pig farm.

What was your favourite present?

Oh… erm… I’m never that into presents. I don’t mean to sound like a total martyr but I can’t even remember what I was given. I got a vegetable strainer, which I quite like. It’s yellow.

You are about to appear at the Hampstead theatre in Di and Viv and Rose, a play written by Amelia Bullmore, which features three strong, funny female characters. Is it rare for women to find original material like that to act in?

Yes, massively. Very few people are doing it. Julia Davis is a huge champion and she does it amazingly, and there are others like Victoria Wood, but to have three funny women at the centre of the play is quite rare. And they’re not laughing about periods or tampons, it’s almost boyish humour. Some of it’s quite crass and sexual, but it’s really witty as well. It’s hard to come across those parts. I find loads of women’s parts are really dumbed down. Loads of women’s drama is really dumbed down. But when I read this script, by the time I got to page five, I knew I wanted to be in it.

You read history at Liverpool University

But I am quite stupid. I didn’t do very much. I worked out with a very dear friend of mine that if we learned five facts about each thing, because we were both quite good at arguing, it would get us through any exam. You just needed five facts and a really good argument. We both got 2:1s. He went on to become an army officer dealing in logistics, and our other friend who learned everything also got a 2:1. I’m just not academic. I got asked to be onUniversity Challenge this year, the Christmas one, and I had to say no.

You specialised in the first world war in your degree. Was that part of the reason you took on the role of Sarah Burton in the BBC adaptation of Winifred Holtby’s interwar novel South Riding in 2011?

Oh, there were so many reasons. South Riding is fictional but it’s based on East Riding, where we filmed and where I was born and brought up. I received lots of letters from people whose mother or grandmother knewWinifred Holtby and that was extraordinary for me. I understood that area. Those beaches were where my father took me as a little girl. I find that interwar period fascinating. It’s that awful thing, which we touched on in South Riding, where no one knows they’re on the cusp of another war.

Your parents were both scientists [Maxwell Martin’s father was the MD of a pharmaceutical company; her mother a research scientist]. Were they surprised they’d spawned an actor?

I think they were. My brother was quite theatrical, too, and they were baffled about where it came from. But I can’t remember them for a moment expressing consternation about it. When I was younger, I did more singing than acting. Lots of singing in inappropriate clothes [laughs]. I went to a singing group and they dragged me willingly around all these competitions. I think they felt I was being channelled in the right direction because I was quite hyperactive. They were totally supportive.

What does your brother do now?

He’s super-clever with computers and the media. I don’t even understand what he does.

Are your own children [Maggie, three, and Nancy, one] latent performers?

I’m slightly dreading it, to be honest, because I’ve done well – touch wood. I’m really lucky to work as much as I do and my husband is successful in the same industry and I dread it because we are not reflective of most people in this profession. There are hardly any parts and a lot of actors and so many people don’t work and struggle really hard to keep going.

Your husband, Roger Michell, is an acclaimed film, TV and theatre director. Do you give each other honest critiques of your work?

I totally welcome Roger’s – and I’m using inverted commas here – “notes”. I’m not an overly sensitive person. I don’t get offended if someone comes up to me in Waitrose – for some reason, it’s Waitrose in particular – and says: “Oh, I saw you in Cabaret. I hated it. You weren’t very good.” It doesn’t bother me. I think: “OK, that’s your opinion and, yeah, maybe I wasn’t very good.” Rog is one of the best directors I’ve ever worked with. So if I’m doing a play, he will come to the preview and tell me what he thinks. As I value him as an artist, I’d be dumb not to take it on board.

What’s your favourite film of his?

My favourite is The Mother. I love his darkly comic work. I love Venus as well. He also does amazing theatre.

Not Notting Hill then?

[chuckles] Notting Hill is not really my kind of film. I find it arse-achingly middle class.

Your husband is some years older than you and has two grown-up children. What’s it like being a stepmother?

I don’t think of myself as a stepmother because I don’t feel I’ve mothered them. They’re amazing and make me laugh. I get on very well with them because they’re so funny and bright.

Oh I got totally misquoted saying I can dance like Rihanna. I can’t! What I did say is that I enjoy a dance-off with my stepdaughter and her friends. In fact, it was my stepson’s 21st birthday recently and I was waiting all evening for a dance-off but they’re all at Cambridge and very sophisticated so it never happened.

You’ve played so many different and varied characters. Apart from in Waitrose, do people recognise you?

Never, ever. I went to a friend’s recently and one of the guests said: “Oh, I don’t really know who you are or what you do but the only decent telly I’ve seen recently is a series called Accused [the BBC anthology series directed by Jimmy McGovern] and I really liked the last episode which had a really good person in it.” And my friend said: “That was Anna.”

What is the greatest piece of acting you’ve seen?

The work that has most inspired me is a film called The Arbor, with Monica Dolan. It’s extraordinarily powerful. The acting is amazing.