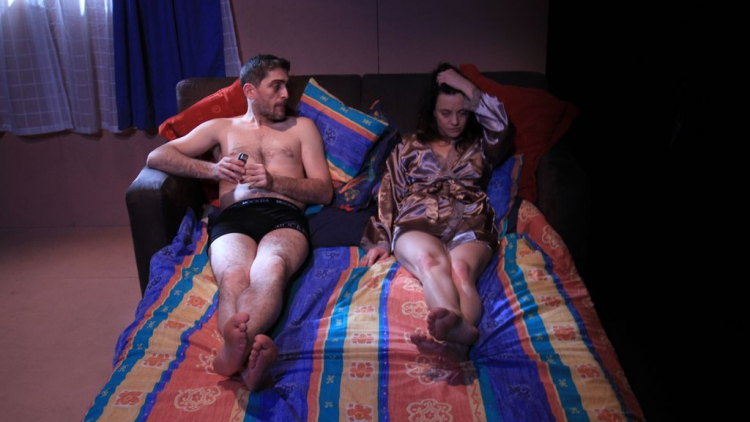 One of the most exciting aspects of developing Tu i Teraz (Here and Now) has been exploring the language possibilities for the play which contains scenes in English, Polish and dysfluent (‘broken’) English.

The play is about experiences of Polish migrants and Poles have been involved in the process at every level, so I felt strongly from the start that I wanted audiences to be exposed to the Polish language. It’s challenging and exciting for audiences to watch scenes where they can’t fully engage with what’s being said; it allows them to focus on the emotions of the scene and the visual impact of what’s happening.

I studied modern languages at university and am fascinated by the relationship between language and culture: for example, the way the structure of a language affects social interaction and how languages have distinct non verbal patterns as well as verbal ones, like gesture and body language. So by not having Polish in the play, the audience would miss out on how Polish is communicated non-verbally as well as verbally.

One of the key issues for the Polish migrants I interviewed was the language barrier and in particular being in a situation where you’re not quite sure of what’s being said. It’s precisely that experience of displacement and uncertainty that English audience members encounter during the Polish scenes. This brings them closer to contemporary migrant experience. That said, of course audiences need to understand what’s happening in the play and together with my creative team, we’ve made careful decisions about the amount of Polish in the play and worked hard to make sure understanding isn’t compromised.

As well as Polish, the characters also use dysfluent (‘broken’) English. At first, I decided Polish characters should speak Polish to each other and the simplest way to convey this to an English speaking audience was through natural English. But I was aware that this wasn’t perfect—so much is lost in translation.

So, when my director, Sam Potter, encouraged me to experiment with the characters speaking in non-native English, I was excited but also unsure. Could I do this in a way which a) made sense within the context of the play – why would Polish speakers chose to speak to each other in English? and b) let me develop characters which had psychological depth.

My reservations resolved themselves naturally through the play’s development. As Marysia, the older sister, is determined to cast off her Polish roots, it was believable that she might insist on speaking English. I know many Polish families who choose to speak English at home, often because they want their children to be able to keep up in the classroom. To create complex characters who converse in non-native English, I used my linguistic skills, paying careful attention to vocabulary registers, and specifying who can manage the definite article, who omits the verb ‘to be’ and so on. Rather than everyone speaking the same broken English, my intention was that all the characters have clearly defined voices.

With these language choices, I hope I have created a play which gives audience members new insights into aspects of contemporary migrant experience.

- Nicola Werenowska, writer of Tu i Teraz (Here and Now)