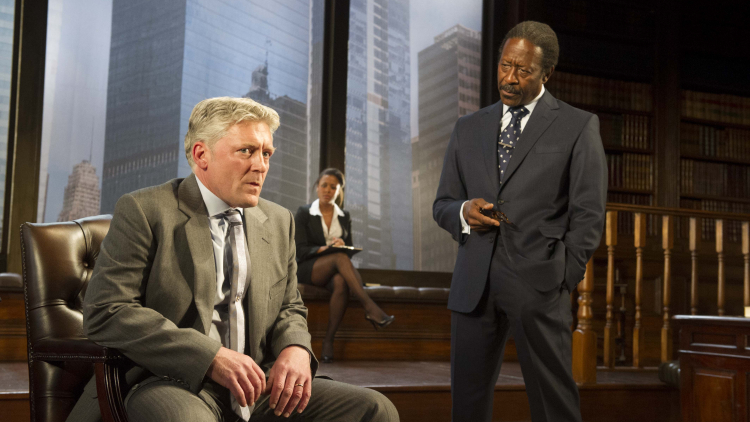 Living in colour: David Mamet is in fine form with Race, an exhilarating debate with a high-octane cast
Review by Christopher Hart
The Sunday Times

Race: tricky subject. One needs to be sensitive. “As a Jew,” David Mamet wrote in The New York Times, “there is nothing a non-Jew can say to a Jew on the subject of Jewishness that is not patronising, upsetting or simply wrong.” Tsk. Typical touchy Jew.

For good measure, Mamet throws rape into the mix as well. The story deals with the forthcoming trial of a wealthy white businessman, Charles Strickland, accused of raping a black maid in a hotel. The play was eerily prescient, written before the Dominique Strauss-Kahn affair — it first appeared on Broadway in 2009. Here, it is powerfully revived under Terry Johnson’s expert direction. It’s a one-act piece, the action taking place in the offices of the ­lawyers Jack Lawson (white) and Henry Brown (black). Do they take it on, defending Strickland, or is this case just toxic, whatever the outcome? Many people will already have decided Strickland is guilty, simply because he’s rich and white and the alleged victim is poor and black. This is the black lawyer’s argument. The play is full of such enjoyably start­ling moments.

Things are complicated by the fact that the young lawyer just taken on at the firm, Susan (Nina Toussaint-White), is also black, and sexy and opinionated, too. It’s invigorating, high-octane stuff, powerfully acted by all four of the cast, with Jasper Britton as Jack Lawson absolutely captivating. The hard-as-nails one-liners rattle out one after the other; the ping-pong dialogue bristles with cynical, worldly wisdom, as once again we’re transported to that familiar, hypermasculine Mamet landscape of men in suits striding about, perching on the edges of desks, speaking as if they’ve just inhaled several cans of Red Bull. The designer Tim Short­all’s office is a magnificent slice of oak and mahogany and leather-bound books. The lawyers’ savvy is serving them well.

Close your eyes, though, and they are ­little differentiated, quirk-free, impermeable. They are changeless and not entirely human, and you’re never really going to like any of them. A Mamet hotshot lawyer is 100% a hotshot lawyer and nothing else. Here is a strictly Darwinian view of human life and transactions. Whaddya got? If female, your weapons are “chiefly… youth and beauty”. If you’re a man, it’s better to be “old and rich”. “And white?” “You bet.”

Ever-exhilarating, Mamet takes on herd thinking and timidity with great gusto, his characters’ ferocious exchanges always thought-provoking, indeed thought-demanding. It’s quite a relief simply to hear race discussed at all, especially with so much passion and candour, as here. Racial divisions won’t go away, Mamet is insisting, just because we pretend they have. Meanwhile, we get Susan protesting to her boss, Jack Lawson: “You think black people are stupid?” “I think all people are stupid. I don’t think blacks are exempt.”

The play excavates and excoriates both covert racism, white and black, as well as a range of liberal pieties, suggesting all sorts of risqué things about white fear and abasement, squirming white shame and misplaced guilt. It also takes a hard look at black identity politics, black bloc-thinking and bloc-voting: the way, for instance, in which all-black juries tend to find black people innocent and white people guilty.