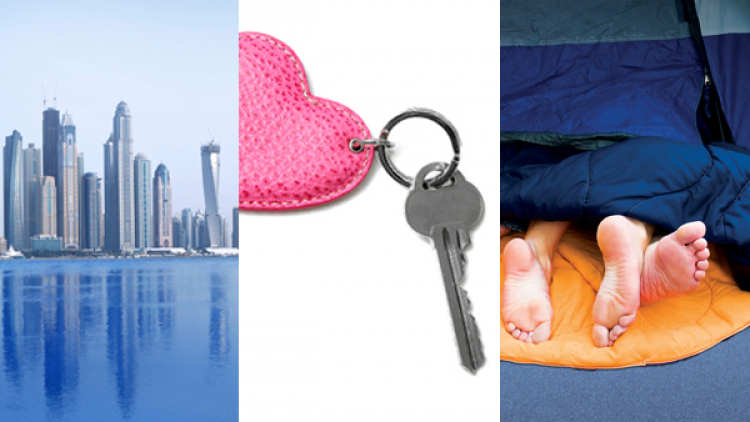 Hampstead Downstairs is an intimate 80-seat studio that continues to thrive. In 2012, Downstairs welcomed over 25,000 people through the doors. This unique space offers a platform for writers to present fresh and entertaining work away from commercial pressure or formal press evaluation. The audience’s response – primarily expressed online – guides us as to whether a play has a future life.

New plays are at the heart of the programme. While our mission is to seek out and identify the newest talent, we also continue to nurture mid-career and established writers and directors.

The Empty Quarter
By Alexandra Wood
Directed by Anna Ledwich

‘There’s a lot wrong with this place. But nowhere’s perfect.’

Dubai seems to offer British twenty-somethings Greg and Holly everything they could want: tax-free income, a brand new apartment and an exotic landscape waiting to be explored. But surviving on the edge of a desert in a society they don’t understand proves more difficult than they could have imagined. In need of help they turn to fellow expats Gemma and Patrick but soon start to question why it is they came, and whether they’ll ever get home…

Alexandra Wood’s new play studies the challenges of living in a foreign land, and where or to whom we belong. Winner of the George Devine Award 2007 for most promising playwright, Wood is currently Paines Plough’s Big Room Playwright-in-Resident. Her previous theatre credits include an adaptation of Jung Chang’s Wild Swans (Young Vic), The Eleventh Capital (Royal Court) Unbroken (Gate Theatre) and contributed to Decade (Headlong).

Lou is getting on with her life, carefree and without ties. But this abruptly comes to a halt when her 19 year old god-daughter Minnie moves in to take up a place at university. Minnie’s arrival shines a harsh light into the corners of Lou’s life – revealing it to be not as it seems. Her relationships are complicated, her neighbours are closing in on her, and the clock is ticking. What does it mean to be a grown up?

Tracy-Ann Oberman makes her Hampstead Downstairs debut following the sell-out run of Old Money on the Main Stage earlier this year. Her most recent theatre credits include Boeing! Boeing! (Comedy Theatre/West End) and Earthquakes in London (Headlong/National Theatre). Television include Doctor Who, EastEnders and Monroe.

‘Christmas is actually a very good time to have a disaster. It’s the season of goodwill…’

Disasters Relief’s staff parties are legendary – but their aftermath cataclysmic. Nick and Abi wake amidst the carnage to breaking news: a massive earthquake has struck Pakistan.

Gathering their clothes – and dignity – the race with rivals Oxfam begins. Who can be the first to dispatch branded aid in full view of the world media? And how far are they willing to go? With the appalling spectre of last night’s antics hanging over everything, the day rapidly spirals into a dizzying web of secrets and lies.

Ali Taylor’s razor sharp new comedy exposes the dilemmas of working in a modern charity and asks whether doing good is the same as being good. He makes his Hampstead debut after winning the Meyer Whitworth Award in 2008 for his first play Cotton Wool (Theatre503). Previous credits include Overspill (Soho Theatre) and Sticks and Stones (Polka Theatre).