The Times: Terry Johnson on theatre and Hitchcock blondes 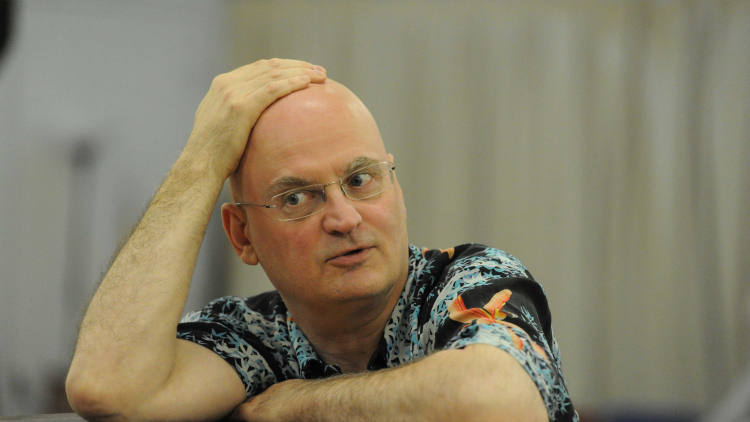 Terry Johnson’s plays are all sex, nudity and wicked comedy, but don’t expect many more. A writer’s life is miserable, he tells The Times’ Andrew Billen.

At 57, Johnson is an acclaimed theatre director. In 2010 he won a Tony Award for his production of La Cage Aux Folles, which originated in London at the Menier Chocolate Factory. He has not written an original play for seven years, yet he is still best known for his writing. His second most familiar work, 1982’s Insignificance, in which Marilyn Monroe explains the theory of relativity to Albert Einstein, became a Nicolas Roeg film. But it is 1993’sHysteria, which Johnson is directing in a revival starring Antony Sher at the Hampstead Theatre, that is his quintessential work. It has Sigmund Freud at the end of his life in Hampstead, woozy from morphine, exhausted by a trip to Ben Travers’ farce Rookery Nook, attempting to handle visits from Salvador Dalí and the daughter of one his hysterical Viennese analysands who has committed suicide.

Our encounter is in a dressing room at the theatre. Johnson moves to the window so he need not see his own, striking, cannonball-headed reflection in the wall-sized mirror. He is dressed, appropriately, in a shirt on which printed timepieces surreally bend, Dalí-like. I tell him that when the production toured last year, I saw it with a therapist who complained that it reduced the father of analysis to a farceur. I assured her that Johnson was doing so with serious intent. Perhaps he might explain the connection?

“Farce is a ritual,” he says.” “Something usually has to be hidden from an authority figure and the ritual is an uncovering of that hidden thing leading towards a resolution of anxiety. And that’s a very precise description of the process of analysis.”

The play scolds Freud for his rejection of his earlier theory that hysteria frequently stemmed from repressed memories of childhood sexual abuse. This was a very common feminist critique 20 years ago when Johnson was writing, but I always felt Hysteria cheated a little. There was no visit by a Jessica. There was no Jessica. In fact, I wonder if he has any evidence that any of Freud’s patients killed themselves.

“No. No, I don’t.” So he has added a little bit of . . . “Drama? I invented Jessica based on a lot of reading about abuse victims. Or rather I invented Jessica’s mother. No, I don’t think it was manipulative to make her up. It seemed at the time just too presumptuous to take a character who did exist, like in three sentences of Freud, and extrapolate a history. I’ll stand by her history. I don’t think it’s beyond the realms of feasibility.”
It feels emotionally right? “And intellectually right.”

What is right in this debate is not really the point. Johnson’s feat is to turn Freud’s dangerous method into comedy, and he is just as clever at turning comedy into psychosocial analysis: there’s Dead Funny, a farce about a society of sexually repressed comedy obsessives; Cleo, Camping, Emmanuelle and Dick about the unhappy Carry Ontroupe and Not Only but Always, on Peter Cook’s relationship with Dudley Moore. “Laughter,” he says, “is the deal. Laughter is how you make sure the audience gets their money’s worth and laughter is how you make sure you create a commonality in the audience.”

Yet, I say, his writing often suggests a suspicion of comedians. He bristles. Some who knew Peter Cook before his death, I say, were offended by his portrait of a mortally embittered man. Disarmingly, Johnson says they were right to be offended.

“Give [the film] another 15 minutes and you’ll find a lot of extraneous scenes where people just sit around enjoying him and he enhances their lives. But, you know, that’s the bugger: a life story in an hour and a half. Something’s going to go. I take that criticism, absolutely, and I apologise for it. Again, I wouldn’t have embarked on that project if I didn’t think he was one of the two most important men in British culture over the past century.” (The other was Spike Milligan.)
He also admits that the British — he was brought up in Watford, the son of a builder — make odd use of comedy: to reassure them about sex. And so we arrive at the sex in Johnson’s comedies and their frequent juxtaposition of dirty old men with beautiful but threateningly intelligent women.

“Dirty old men? Well, I’m fast approaching the status of old man. I will take offence at the ‘dirty’ bit. Who are you thinking of? Sid [James]?”

Hitchcock in Hitchcock Blonde, I say. “I still take offence. Dirty old men! I don’t think that’s particularly complex enough. Hitch was a voyeur, a rather estranged man from women who thus created images of them. But I’ll tell you what, you can trace it all the way back. I’ll tell you what I do believe in: Jung’s theory of archetypes.”

In a newspaper essay Johnson wrote about Jung’s storytelling archetypes, among them the wise old man “under siege” from the “vivacious young female”. He says that from his early twenties he felt himself both the old man encountering the young woman and the young woman encountering the old man. “Quite often men need to abstract women in order to relate to them at all, because men have this huge sexual thing going on.”

He began, he says, writing a “PC version” of Hitchcock Blonde. “I got more and more interested in the men who’d written the books about all this, which is where the fourth character [the academic] in the play came from. I remember very consciously sitting at the desk thinking, ‘F*** this! I’m going to have to become complicit in this. I’m going to allow my own enjoyment of the female form and the female image. I’m going to put my hand up to it through that character and I’m going to put it on stage.’

“What Hitchcock Blonde did was released me from shame really. I’m no longer a bound eroticist. I’m over that.”

“It was completely wrecked by its critical response. It’s never been done since. They wiped it out. I’m very proud of it. I’ve lost count of women who were in their mid-twenties who have come up to me and said, ‘I read that play. That’s why I [wanted to act]’ or ‘I came to it five times.’ There is an anger when I talk about it because the people who would have liked that play, women in their early twenties, which is who it was written for really, were completely disenfranchised by the critical community.”