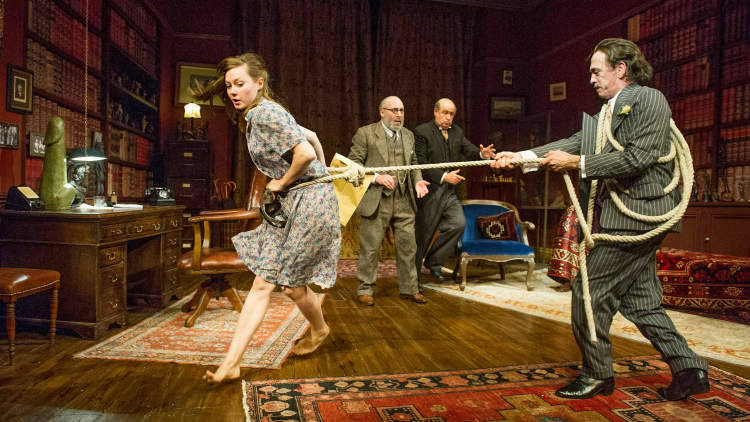 One of the most iconic, perhaps iconoclastic, images on the British stage in recent years was the macho troupe of all-male, half-naked swans in Matthew Bourne’s electrifying production of Swan Lake at Sadlers Wells. The show’s designer was Lez Brotherston, and it went on to win over 30 international awards, becoming the longest running ballet in the West End and on Broadway. For Brotherston, it was the start of a long-term collaboration with Bourne, and today he is widely respected as one of the most innovative designers working in theatre in the UK. Hysteria is his first production for Hampstead Theatre.

We caught up with him on the hectic day after the first preview of Hysteria. There is adrenalin in the air. A model that Brotherston has made of the stage has temporarily disappeared, and there is tweaking and fine-tuning to be done before opening night. Brotherston remains calm, although he admits to finding it hard to watch one of his own shows from the audience, without jumping up and running backstage. He has worked with director Terry Johnson before, on The Rise and Fall of Little Voice, but this is the first time he has designed for one of Johnson’s own plays. He finds it very liberating to work directly with the writer on a play.

‘You can go for it in design terms because you have immediate permission from the writer. And Hysteria is a remarkable piece. It’s so well crafted, such a gifted piece of writing. Every single piece of direction is in the script’.

Brotherston believes you do not need to know much about Freud to understand the play, and it does not ‘make you feel stupid’. Instead of being a didactic exposition of Freud’s ideology, the play raises questions about Freud’s retraction of his early theories on hysteria, by punctuating a searing story of abuse, with farce. This technique of combining pathos and comedy characterises Johnson’s work.

‘His play Cleo, Camping, Emanuelle and Dick at the National Theatre made me sob. It’s a brilliant piece about the key actors from the Carry On films, set in Sid James’s caravan. For our generation who have grown up with those films, it is poignant and funny at the same time.’

For Hysteria, Johnson asked Brotherston to recreate as near as possible Freud’s study in Maresfield Gardens, and make it feel ‘womb-like’, but when they visited the Freud Museum they quickly realised that an exact replica of the study would not work. The set needed to facilitate the play’s door-banging, where-are-my-trousers aspects of farce, and then halfway through, accommodate the drama’s complete shift in tone and setting. As Brotherston points out, you get to a certain point in the play where you think you know what it’s about, but suddenly ‘you hit mayhem’ when Freud’s own psyche begins to unravel in a spectacular manner. He is transported into a disturbingly familiar Dali dreamscape – from an armchair in his Hampstead study. It’s a tricky thing to pull off. When asked about the production’s most Dali-esque prop of a melting clock, Brotherston laughs because its first incarnation was a disaster. He also points out that the return to Freud’s study heralds a key, intense piece of dialogue that resolves the central enigma of the play. From a design point of view, there had to be a clever and seamless transition.

‘My major design contribution was imagining the way of getting into and out of the surrealist vision from the study,’ he says. ‘The room opens and then you see more, and then it closes again. You have to explode out of the set into the landscape. There are many ways you could do this, and I purposely didn’t look at what Mark Thomson had done in the original production at the Royal Court’.

When Brotherston is working with Bourne, they are always looking for ‘links – things to link through’: aspects of narrative that they can develop. The designer is happiest if he is telling a good story or communicating emotion. For him, theatre has to have ‘something to say’. He does not design for abstract pieces, because he has no interest in providing what he calls ‘window dressing’. His starting point of inspiration comes from his passion for narrative and the script, rather than any external element. When he was training at Central, Pamela Howard, the leading Stage Designer, ran a text-based course, which exhorted the students to scrutinise the script.

‘What you are looking for, when you are designing, is in the play’, says Brotherston. ‘And you just have to dig it out’.

He acknowledges that there are three or four technical tricks that a designer has to learn to allow dancers to move, but he is sceptical about designers who conjure mystique around their craft, dismissing what he sees as lazy productions ‘when it becomes about who can design the prettiest tutu’.

Brotherston particularly enjoys the intellectual stimulation of reinventing classical ballets. His approach is to combine great creativity with a rigorous attention to historical accuracy. In their recent Sleeping Beauty, Brotherston and Bourne set Beauty’s hundred year sleep between 1911 and 2011, so the costumes could clearly reflect that a century had passed – something that he says is rarely communicated in classical productions of the ballet. However, he claims modestly that he does not think he draws very well but does ‘quite good’ costume drawings. This is something of an understatement: his sinuously elegant sketches for Women Beware Women are available on the National Theatre website as an educational resource for the nation.

Ultimately why does Lez Brotherston do his job? ‘I love making worlds; I love making characters; and I love communicating something to the audience. It’s theatre, so it’s got to hit an emotional chord somewhere’.

Hysteria runs on the Main Stage until 12 October. All tickets now sold out but returns and Executive Director seats are sometimes released daily. Keep checking the website for availability.