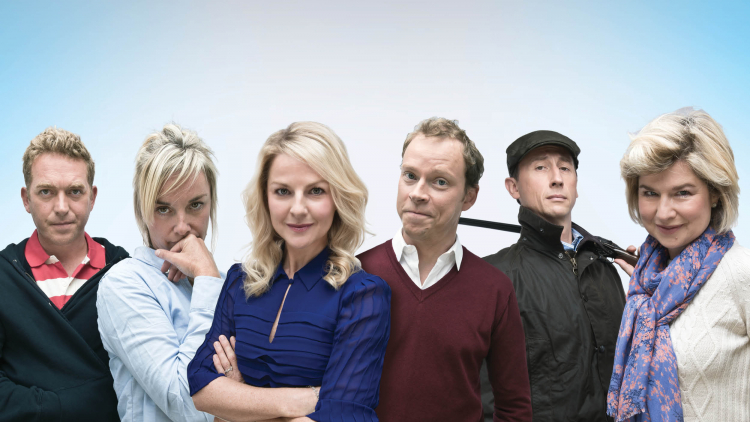 But they make up the numbers by inviting the unpredictable Charles and Serena. Add an uninvited anarchic adolescent and fanatical farmer and Briony and Keith’s idyllic weekend erupts into total chaos …

This is Simon Paisley Day’s first play. He is well known as an actor, having recently been in The Taming Of The Shrew (Shakespeare’s Globe), Private Lives (Music Box Theatre, New York), Twelfth Night (National Theatre) and Private Lives (Vaudeville Theatre). He is also frequently on television, appearances including Da Vinci’s Demons, Titanic, Doc Martin and Sherlock. Films include King Of Soho, Eagle Of The Ninth, Unfamiliar and Flawless.

Ifan Huw Dafydd has worked extensively with Clwyd Theatr Cymru, appearing in Arden of Faversham, Blackthorn, Festen, Memory, Rosencrantz and Guildenstern are Dead and many others. Film includes Martha, Jac A Sianco (BAFTA Best Actor 2009), Abraham’s Point and Daddy’s Girl. His many TV roles include in Borgia, Stella (Series 1&2), Alys, and Gavin And Stacey.

Sarah Hadland is well known on TV, having previously worked with Robert Webb on three Mitchell and Webb series, and in Burton And Taylor, The Job Lot, all three series of Miranda and two series of Waterloo Road. Stage appearances include Canvas (Chichester Festival Theatre), Decor Without Production (Royal Court) and The Vegemite Tales (Riverside Studios). Films include Royal Wedding, Leapyear and Quantum Of Solace.

Barnaby Kay’s stage appearances include Danton’s Death (National), The Real Thing (Old Vic), A Streetcar Named Desire (Donmar Warehouse) and War And Peace (Shared Experience). On TV he has appeared in several episodes of Holby City and Midsomer Murders, Wallander, and What To Do When Someone Dies. Films include Aka: Albert Walker, Conspiracy and Eisenstein.

Tamzin Outhwaite (EastEnders and Red Cap) returns to Hampstead following the critically acclaimed Di And Viv And Rose in the spring. Other theatre credits include Sweet Charity and Boeing Boeing (both West End).

Issy van Randwyck’s many stage appearances include in The American Clock (Finborough Theatre), No Naughty Bits (Hampstead Theatre), Marilyn Monroe in Becoming Marilyn (Riverside Studios/Assembly Rooms), Arcadia, The Man Who Came to Dinner, A Small Family Business and Song of Singapore (Chichester), A Little Night Music and Once in a Lifetime (National). Television includes Downton Abbey, Christopher & His Kind, Spooks, Kingdom and Trial And Retribution.