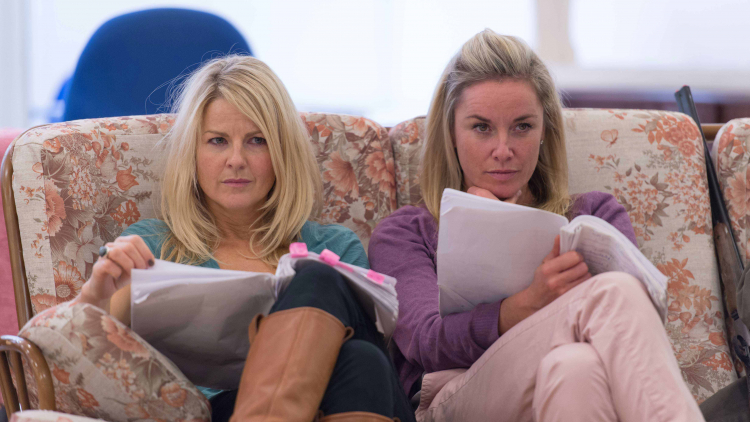 It is what all writers hope for at least once in their careers: a defining, game-changing moment. For Simon Paisley Day, writer of Raving, which previews on the Main Stage from 17 October, the moment came in late spring this year, when he received a telephone call from Edward Hall, Hampstead’s Artistic Director.

‘Hello it’s Ed here, I just want to tell you that I’ve fallen in love with Raving. I want to direct it, Tamzin (Outhwaite) is going to be in it, and it’s going to be on the Main Stage. Is that all right?’

Paisley Day says that this gives hope to other writers when they hear about it, that sometimes there is a reward for ‘sheer bloody-mindedness, after you’ve been butting your head up against a wall, sending your work to directors and theatres, but keep being turned down. A reward for those times that people say they like your work, but it’s not quite right’.

Simon Paisley Day is a sought-after film and theatre actor, a versatile and elegantly incisive stage presence, appearing most recently in Bruce Norris’s acclaimed The Low Road at The Royal Court, and as Petruchio in The Taming of the Shrew at Shakespeare’s Globe. He had been writing Raving for around four years, and describes it as ‘a play about three couples who go for a weekend to get away from their kids and end up controlling each other, because their kids aren’t around’. A comedy about modern middle-class parenting manners, it crackles with a surprising undercurrent of violence. The writer finds plenty to parody in his chosen territory, especially a certain smug hypocrisy and self-consciousness about parenting ‘style’. One feels Paisley Day has rather enjoyed unleashing his version of latent frustration, allowing it to run wild and free on a remote hillside in Wales. With a twinkle in his eye, he remarks that all eight characters in Raving are ‘splintered parts of my own psyche’, a brave and somewhat tongue-in-cheek claim in the context of the personality upheaval that he inflicts on his eight unravelling weekenders.

Paisley Day depicts a subtly shifting power play between the very different parent couples, unearthing casual xenophobia, sexual paranoia, and bullying beneath the sophisticated veneer they project. Those who believe themselves to be in power are toppled by their own weakness. He says that he likes to throw believable characters into extreme comic situations, so that their actions of frustrated desperation seem all the more shocking.

‘They are not only controlling each other in Wales, they are also trying to parent each other. They treat two of the characters – Briony and Keith – like naughty children. I suppose if one were to put in a nutshell what the play is about, it would be about how we try to control ourselves, other people, our environment. It’s about frustration, angst, and stress’.

The collaborative aspect of acting has perhaps influenced Paisley Day’s approach to writing. He considers that one feeds the other, and is in no hurry to choose between the two. When a literary agent told him a few years ago that he had to decide between them, it provoked a strong gut reaction.

‘I said no – I’m not going to do that. I’m going to write and I’m going to act. It may seem a bit greedy but acting is such a wonderful team effort: you have a good giggle when you’re performing. And writing – although it’s wonderfully satisfying, can be lonesome.’

During the period he was working on Raving, this instinct for collaboration led him to organise four readings of the play in theatres where he was acting. By doing this, he received vital encouragement and constructive feedback from actors and audience, people often asking why the play had not been put on yet. He also had the invaluable critique of writer and actor Andy de la Tour, who directed the readings for him. It was at one of these run-throughs that Will Mortimer (Literary Manager at Hampstead) offered to show it to Hall, saying the play made him laugh. Paisley Day acknowledges that, in his case, getting it in front of the right people at a theatre was more productive than attaching the play to any one director.

Raving is just about to be sent to the publisher Oberon, but while still in rehearsal, Paisley Day is enjoying the immediacy of presenting his own new writing, and the power he has ‘to change things right now’, compared to working on a revival of an existing play.

‘When you’re acting in a play that has already been done before, there’s a sort of hallowedness about that published script – it’s not a basis for negotiation,’ says Paisley Day. ‘But if the writer were still alive today and able to be in rehearsals for that revival, the person might say that he actually doesn’t like a particular line anymore – it might be a bit dated, and he might want to say something else now’.

In one instance he managed to re-draft a page of dialogue that he had always felt did not quite flow properly, and email it to Will Mortimer who quickly disseminated it to the cast just before rehearsal. He remembers that Sir Trevor Nunn, when directing new plays at The National, would reserve the right not to change anything until the piece was in preview, when he could see it play before a live, paying audience.

As someone who has spoken the words of so many others over the years, Paisley Day has a natural ear for language, citing Pinter, Albee, Mamet and Miller as key influences. He studied drama at UEA, but also took a creative writing course there, and credits the course tutor as being one of the reasons he persevered with his writing.

‘He thought that the things I wrote were so appalling that he couldn’t bring himself to talk to me. I think that’s why I carried on: I thought – damn you! I’ll write in spite of you’.

Raving is on the Main Stage from 17 October.