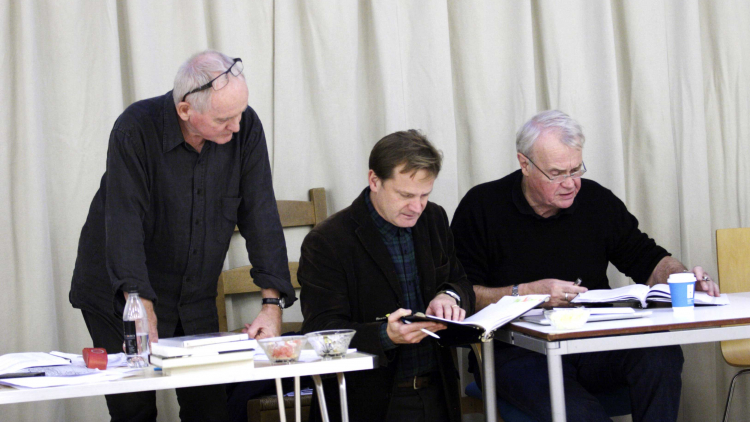 Howard Davies, multi-award winning director of Drawing the Line is telling me that he gravitates towards work that scares him ‘witless’. This is probably because Howard Davies CBE likes to take on big plays. It is a rainy Monday morning in the third week of rehearsals, the critical moment when the play is ‘put on its feet’ and the actors go off-script. We are talking in a space that has been emptied of all props and most furniture, possibly because the cast is huge, but the rehearsal room is not.

A mighty figure in contemporary British theatre, Davies is engagingly wry and under-stated in person. He has been garlanded extensively for his epic storytelling both in the UK and on Broadway, and is currently an Associate Director of the National Theatre, previously having worked at the RSC for many years, establishing the Warehouse Theatre (now the Donmar) with Trevor Nunn. Charles Spencer, The Telegraph’s theatre critic, has said of the director that when he is on top form, no one can better him at animating a large ensemble and creating a dramatic atmosphere in which comedy mingles with despair. Certainly Brenton’s new play feels like an epic, with its cast of seventeen actors, multiple scene changes, and depiction of an electrifying moment in history, but one senses more excitement from Davies about this particular project, than fear.

Davies has directed the cream of British theatre, from Helen Mirren in Mourning Becomes Electra (2003), recently reprised as part of the televised NT 50 Years On Stage gala, to Kevin Spacey in The Iceman Cometh (1999), and Alan Rickman and Lindsay Duncan in the critically-acclaimed 1985 production of Les Liaisons Dangereuses. Today he is chuckling as he describes what it is like working with Hampstead’s Edward Hall, Artistic Director, and Greg Ripley-Duggan, Executive Producer:

‘The extraordinary thing here at Hampstead is that they don’t give you any parameters to follow. They just said to me with this play, and with 55 Days: “You do what you want to do and we’ll try to make it work”. This is unheard of. Normally if you’re doing a show in the West End, you’re told very strictly and in no uncertain terms: this is the budget and this is what we’re aiming at [in sales]. You can’t do this and you can’t do that. Here they say: “You dream and we’ll try to make that realisable”.’

If Edward Hall had not grabbed Drawing the Line immediately, says Davies, it would have gone straight to another theatre, as it is such an important piece. He points out what a big undertaking a play of this scale is, for a theatre like Hampstead, which receives a tiny slice of public funding compared to the funding an institution like the National receives, and he admires Hall and Ripley-Duggan for having the courage of their convictions. Hampstead was similarly adventurous with the Brenton/Davies 2012 collaboration 55 Days, facilitating Davies’s vision of staging the play in traverse formation, to conjure the courtroom of the trial of Charles I. When Davies heard that the play was due to transfer to the West End, he thought he might have to redesign the whole production. However Ripley-Duggan insisted that he would make the situation work somehow, not even blanching when Davies followed up with a request for 15 extras for the courtroom scene.

‘It’s generous in the extreme or foolhardy in the extreme!’ says Davies. ‘But what they are doing is allowing writers and directors to have an enormous imaginative range. The scale of your production doesn’t have any boundaries round it. You end up coming back to them saying this is what I’d like – and they try and make it work.’

Davies, Brenton, and award-winning designer Tim Hatley – a high-powered team by anyone’s reckoning – tell a story that almost defies credulity, with Hatley’s set, evoking the beauty of the Mughal architecture of Northern India to heighten the poignancy of what is about to be destroyed. In 1947, Atlee chose an English circuit judge, Cyril Radcliffe – a man who had never been to India and had no knowledge of cartography – as the person who would choose where to impose the border between India and the new state of Pakistan in only 5 weeks. I ask Davies why he thinks people in this country know so little about the episode.

‘I think it was the fact that World War II over-shadows it,’ says Davies. ‘It was much easier for the British to see ourselves as the heroic under-dogs fighting the evil Nazis and forget about this episode. What we discovered about the Nazis and the camps completely overwhelmed public consciousness and therefore the dismantling of the colony in India became of secondary importance, especially because the country was going through really bad economic times. People genuinely wanted out as fast as possible, but the fact it was done in 5 weeks was appalling.’

When Davies mentions that he has ‘only’ read four good books on the partitioning of India, one senses that he probably knows what he is talking about. He thinks Brenton enjoys the parallels between 1947 and today, in the context of decisions taken about foreign policy in times of austerity, and praises Brenton’s skill in identifying a piece of history that is tailor-made for drama, and his dexterity in selecting the key, turn-of-the-screw events:

‘Howard is immensely sharp and adroit about telling the story without overwhelming us with too much detail. He writes on an epic scale but is totally economic. It’s very muscular writing; there is no wastage at all. The characters have to move from one point of view to the next emotion or decision within an incredibly short space of time. He doesn’t lead you there; he just makes people go there. It means you get a very taut and compressed version of how people behave.’

Brenton showed Davies a film script of Drawing the Line when they were rehearsing 55 Days last year, and Davies suggested it would make a good play.
They first collaborated on Paul at the NT in 2005, going on to do Never So Good in 2008 and 55 Days in 2012. They had known each other for some years before that, as they used to live near each other, but had never worked together until Brenton submitted Paul to the NT.

Davies identifies Brenton’s fascination with the unchanging quality of the political process over the centuries as a continuing theme in his work, particularly the consequence of charismatic people pursuing their own political careers during times of upheaval. There is an interest in seeing what happens when the type of ‘liberal-minded Toryism’, which has dominated 20th century British politics, is put under pressure. In Drawing the Line, the motif of Cyril Radcliffe as the archetypal decent, liberal man who is plunged into a situation that he cannot control, is perhaps intended as a wider metaphor for the fracturing of well-intentioned liberalism in times of crisis. For Davies, it is Radcliffe’s innocence that offers the dramatic entry point to the story.

Like many writers and directors of his generation, Davies began in theatre with something to say. He wanted to stage Bertolt Brecht and Edward Bond, although they were perceived as ‘difficult’ writers, because they chimed with his political beliefs. He describes himself ‘aping other people’s politics, commitments, and passions, riding on the back of them… testing [himself] against those points of view’ while he discovered what it was he actually believed. Then, at the RSC, he realised how extraordinary it was to work with good actors, at the same time falling in love with the ‘big Americans’, O’Neill and Tennessee Williams. This taste for scale brought him to the Russian greats, to playwrights such as Chekhov and Bulgakov, and works of terrifying breadth that triggered an appetite for taking on the impossible.

He is a passionate advocate for new writing, believing that all young directors should learn ‘on the job’ and work with writers of their own generation. He learnt his craft not from the degrees he took at Durham and Bristol Universities, but by booking out the theatre while he was there and putting on plays. While at the RSC, he persuaded Trevor Nunn that the company should have a home for new writing in London. After auditioning scores of venues across London, they found a rehearsal space, a former warehouse that had stored bananas and circus elephants, and launched The Warehouse Theatre, which became the Donmar. He produced and directed 35 new plays in 5 years.

Davies says that some directors see themselves as artists but he sees himself as more of a facilitator, pulling together a writer’s work with the designer, the actors and the composer: ‘You are somehow juggling all these different talents and trying to make it work as a team, watching the whole thing develop from a script on the page. But the initial impulse comes from the writer I believe, and not the director.’

Davies has won many awards but when asked which was the most meaningful, he shares the moment when he heard about his CBE.

‘When the letter arrived one morning, the first thing my wife did was laugh out loud, then she burst into tears. And my daughters mirrored this at the palace: when I went up to receive it, one laughed and one cried! Receiving the award is very moving – but there is also a touch of – really?’