Drawing the Line: ★★★★ from WhatsOnStage 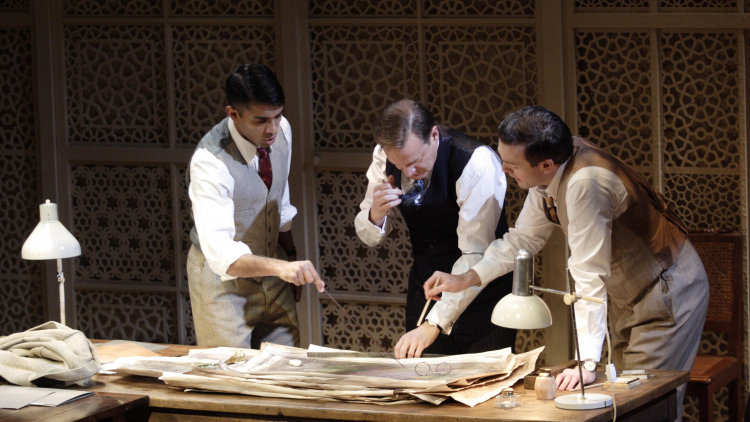 Partition is a dangerous game, and the consequences of “drawing a line” in 1947 to create a Muslim homeland in Pakistan, leaving the rest of India as a secular home for the Hindu majority, was particularly disastrous.

It’s the background to this almost farcical process of colonial disengagement by the British and arbitrary segregation by a civil servant, Cyril Radcliffe, who knew nothing about India and nothing about maps, that is the subject of Howard Brenton’s fleet and fascinating new historical drama.

The origins of the piece as a project for the screen sometimes show through, but many plays come about this way, and Howard Davies’s lucid production succeeds in marshalling a large cast of characters – including the Mountbattens, Nehru (first Indian ruler after the British), Nehru’s mentor, Gandhi, and the leader of the Muslim league, Muhammad Ali Jinnah – with skilful purpose.

The British prime minister, Clement Attlee (a too tall but suitably finicky, pipe-smoking John MacKay), sets a timetable of just five weeks for Radcliffe (Tom Beard, strikingly similar to Colin Firth) “to lift the yoke of imperialism,” while all factions bicker at the Viceroy’s front door, Gandhi (a fragile Tanveer Ghani) remains aloof to politics, and Lucy Black’s vivacious Edwina Mountbatten tries to manoeuvre her torrid affair with the charismatic Nehru of Silas Carson into a bartering block of influence.

And at the centre, Brenton creates a tragi-comic figure in Radcliffe, dealing with the problem in cricketing terms (he wants, impossibly, a “level playing field”), assailed by dysentery, driven to despair by his own increasing realisation of compromise and failure, and finally visited by the Lord Krishna in a dream before he picks up his fateful pencil. Andrew Havill’s imperious, bony-featured Mountbatten is no help at all, keen to get shot of the lot of them.

Whatever fictional twists to character and incident Brenton provides, there’s no doubting either the momentousness of what happens, shadowed by past riots and outrages, some of which atmosphere spills into the mosque-like cane and wicker design of Tim Hatley; or the sense that an entire continent is poised on the brink of calamitous upheaval and unrest.

To read the full review Click here to visit WhatsOnStage.com