An interview with The Bla... 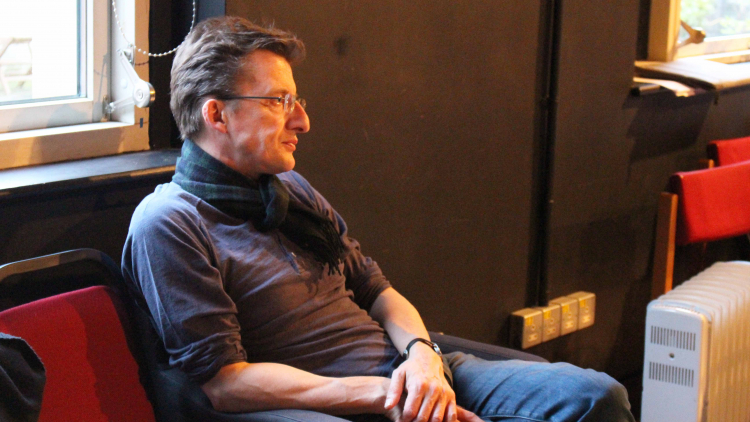 Jeremy Brock, the BAFTA winning screenwriter of films Last King of Scotland and Mrs Brown, is trying to talk to me about his first play for the stage in twenty years, but finding a quiet place to chat in a theatre that is dress-rehearsing the huge cast and crew of Brenton’s Drawing the Line has not been easy. We settle on a spot under some speakers, which suddenly begin to broadcast vigorous sawing and shouted instructions from the Main Stage, followed more mysteriously by Tina Turner’s Private Dancer. Nothing can distract however from Brock’s palpable excitement about the incredibly fast turnaround on the production of his new play The Blackest Black, opening Downstairs on 9 January 2014.

Hampstead Theatre did not procrastinate when it received Brock’s script. First-time writers should look away now, as Brock describes the play’s speedy realisation. He finished the script in early summer, and was in to see Edward Hall in November, when it was quickly decided that the play would fit with what Hampstead Downstairs was doing. Director Michael Longhurst, who did Nick Payne’s acclaimed Constellations (2012), was brought on board and they were due to begin casting on the night of our chat, which would make it an astonishing four weeks from green light to first rehearsal.

‘It’s so exciting,’ says Brock. ‘It does leave me breathless. It does leave me feeling like a student again – that excitement. And Michael Longhurst brings a real interest in science to the project… but also an incredibly acute intelligence. He’s a bravura director so I consider myself very lucky to have someone of his calibre be prepared to come down and do something quasi-experimental.’

The speed of turnaround might have something to do with the calibre of writing in The Blackest Black. The play radiates intelligence and emotion, and features electrifying, cinematic coups de théâtre that should thrill audiences Downstairs. This particular talent for writing with a heightened visual awareness explains in part Brock’s career trajectory: he had two plays presented at the Bristol Old Vic in 1985 and 1990, but quickly diverted to writing for the screen. For ‘financial and circumstantial reasons’ he moved to the BBC as a script editor and at the age of twenty-five co-created Casualty with a colleague from the Bristol Old Vic, Paul Unwin. Theatre was a medium he had always felt very comfortable working in, but television offered ‘on the job’ training in his craft, and he had also been inspired by the work that Dennis Potter was doing for TV in the 1980s. Film followed Casualty, and on the back of the success of Brock’s first feature, The Widowmaker for Yorkshire television, he was asked to write a script for a story about Queen Victoria and John Brown, to be directed by John Madden, a ‘brilliant conductor of talent’, and to star Billy Connolly. The screenplay for Mrs Brown won him a BAFTA, and since then, he has gone on to enjoy a fruitful collaboration with director Kevin Macdonald, together making the acclaimed films, The Last King of Scotland, The Eagle, and this year, How I Live Now. However, the moment that Dench said yes to the Mrs Brown script stays with him.

‘I did a lot of research on the story and sent a first draft to Judi Dench. She was on at the National, and I went to have lunch with her. I ordered fish and chips. She said that she’d better get to the point straightaway – she’d like to do it. She claimed she had decided after only reading the first five pages of the script. I was so excited, I could not eat my fish and chips.’

He says that from a writer’s point of view, this encounter with Dench was a signal moment. He believes in these moments, ‘the moments when the light becomes more intense.’ During our chat, I notice he punctuates his everyday conversation with imagery about light and stars, indicating perhaps his level of absorption in this new play.

The Blackest Black is as an unconventional love story set in an isolated observatory in Arizona. Total strangers, each of course with secrets and vulnerability, are thrown into this intense environment. There is heat, dust, explosive chemistry (or perhaps more accurately, astrophysics) and millions of stars. Stars that collide. Love, art, science, depression, truth and beauty are examined through the lens of metaphysics, posing the big ontological questions about the nature of existence and the limits of experience. Abi and Martin epitomise an attraction of opposites, sparking a ‘gravitational relationship’. She is chaos and art; a talented painter who provokes yet fascinates dry astronomer Martin, pursuing an opportunity to dominate in his field of research.

‘I was interested in how Abi’s dynamic recklessness would impact on him,’ says Brock. ‘In Martin I wanted someone who was at a point in their lives when they wanted to explode out but they were afraid…Martin’s complexity is to do with reaching a point in his life when his ambitions are just beginning to ache. Then he meets Abi. She is boundary-less, she’s reckless, dynamic. There are many images in the play about binary stars, of which they are a kind of living example.’

Brock has always been interested in science ‘with an amateur’s obtuseness and enthusiasm’, especially the way scientists seem to ‘engage their imaginations and the whole of themselves’. But the trigger for The Blackest Black was meeting an artist, Jane Grisewood, at a party and hearing that she was just about to start a secondment at a US government observatory in Tucson: ‘All those feelings I’ve had about art and science suddenly came together and I realised I just needed to go.’

Laughingly he adds that it might sound ‘rather stalkerish’ but Grisewood was happy for him to research while she was completing her project, and watching the way she approached her work was very instructive. He emphasises that his artist, Abi, is an invention, and he also did not base his scientist character, Martin, on any one person, interviewing many astronomers while in Tucson, and identifying amongst them almost universally typical characteristics of acute intelligence, depth of thinking, and even a facility for music. One telling insight that emerged from his research was how arcane scientific understanding is at this level. Martin points out that only a few thousand people in the world can understand his scientific language, and he finds this profoundly isolating.

Brock felt that the strength and magnetism of the two characters, and the subject matter lent itself to theatre rather than film: ‘I don’t think film offered itself up as the natural medium. I felt this was a powerful opportunity to go straight at the dialectic, straight at the argument. A couple caught up in the heat of the passion of the relationship, simultaneously wondering about their worlds and what the worlds of science and art mean to them. It felt appropriate to put them in a little hothouse and explore the intimacy and intensity.’

After such a long break from theatre, Brock is rediscovering the joy of writing for a platform where his writing is visible and recognisably present in the finished piece, as opposed to the ‘ghost in the machine’ that a script becomes in the process of making a film. The nature of collaboration is different in theatre, as playwriting puts you ‘at the heart of the collaboration that pays not only due diligence to your authorship but actually requires you to take responsibility for it. I love that. I’ve missed it.’

There is also the immediacy and intimacy of having an audience react to one’s work: ‘One of the beauties of theatre is that you can be in a much more intense and intimate relationship with the work…One of the most exciting yet nerve-wracking ideas is to be in a room with an audience responding to that play, as people who have not read it and have no idea what they are coming to see.’ When Brock came to see the ‘very brilliant’ Godchild at Downstairs recently, he could sense the actors responding to the audience’s reactions, and comments on how symbiotic the relationship between audience, actor, and performance is.

Although there are massive differences in writing for film and theatre, he finds a certain joy in being able to flex those technical muscles again, which he says link in a different way to one’s intellect and emotion. Creating the requisite intensity around a single milieu, and then developing a scene in that context for 40 minutes is virtually unheard-of in screenwriting. For him the chosen setting for the action has to resonate with meaning and value. In fact the ‘black box’ properties of Hampstead Downstairs make it a pretty perfect place to stage The Blackest Black with its intimate observatory and artist’s studio settings. He envisages the sets almost resonating as personalities themselves.

Brock praises Edward Hall for opening a space like Hampstead Downstairs, which offers opportunities for taking a risk on new writing and its development, during a time of widespread cuts to public funding in theatre. He recognises the difficulty of finding the entry-points for new work at the moment, and says it will be thrilling to see his play up on its feet. Tonight’s casting will be the first time he has heard anyone read any of the lines of his plays out loud, apart from himself: another ‘marker in the sand’ moment.

‘The thing is the writing itself will evolve in this play – and I suspect all the plays down here – and you’re given a unique opportunity free of the press to get it wrong or to get it right. Or to be allowed to get it right and get it even more right!’

Brock imagines he will be doing some ‘felicitous excision of dialogue’, honing and polishing until what is left will be ‘pertinent, resonant, and as telling as possible’. One senses that he is a bit of a perfectionist. He has already completed numerous drafts, even before hearing a single word spoken by an actor. In the play, Abi mentions Samuel Beckett’s famous instruction to ‘fail better’ and I ask him whether he thinks it is more productive to ‘fail better’ or ‘succeed worse’. He’s not sure, but he counsels young writers coming in to the industry not to be deflated by negative collaboration, and to remain open. Brock agrees with David Hare’s recent description of playwriting as a gift you discover you have, but with the caveat that ‘a lot of stars have to be in alignment for it to realise its potential’. This means careful nurturing of a talent that he perceives as almost residing separately from who one is, and with which writers and artists are in a constantly changing relationship. Brock at this stage of his career though is happy to be back writing plays, amidst his film work: ‘I drifted away from theatre, and now I’ve come back. But I feel in my heart that I won’t go away again. One way or another, I will always work in theatre.’