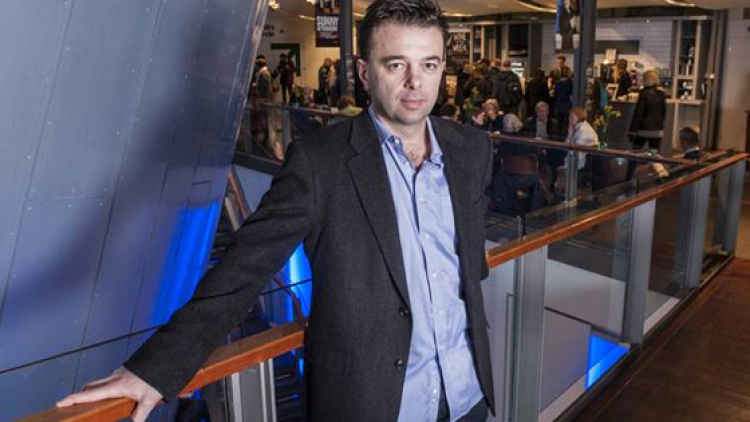 Hall has turned Hampstead around from a financial deficit into a surplus of £475,000 while even fitting in a few directing stints on Downton Abbey. But his next great mission is securing the theatre’s future, he tells *Fiona Mountford
(Picture: Daniel Hambury/Stella Pictures)

“I’m a glass half-full person,” says Edward Hall cheerfully. “Because when you’re directing, you have to be the last person to hear the clock ticking. You have to be the last person to lose your nerve.” Hall would be forgiven for claiming a three-quarters-full glass currently, although his four years as artistic director of Hampstead Theatre have included no small number of ticking clocks and shredded nerves. Not only was Hampstead recently named London Theatre of the Year by industry paper The Stage, its current five-star sell-out hit, Good People, with Imelda Staunton, has just announced a West End transfer, the fifth transfer hit of Hall’s reign.

“Listen, it’s witty and topical,” Hall, 47, says of Jonathan Kent’s production, which has Staunton as a down-on-her-luck single mother in South Boston. “It has people debating what it actually means to be good to each other. What should, or could you, put back?”

The play came to London from Broadway but among the theatre’s breakout hits during his tenure are new British works such as Mike Bartlett’s Chariots of Fire and Morgan Lloyd Malcolm’s Belongings, plus revivals of David Hare’s The Judas Kiss and Mike Leigh’s Ecstasy. Not only is Hampstead becoming a more significant home for new plays, it is about to branch out further. Hall is currently rehearsing Hampstead’s first-ever musical, Sunny Afternoon, scripted by award-winning playwright Joe Penhall, which looks at the early days of The Kinks.

“What interests me is that The Kinks were the group who didn’t quite fit in,” Hall says. “The image kept changing, the music kept shifting. I mean this in a positive way: they weren’t so packaged and produced as The Beatles and the Stones. There’s a very contemporary story running through it: how do you deal with success when you’re young? What is celebrity?”

Hampstead was enjoying precious few sunny afternoons when Hall, son of former RSC and National Theatre supremo Sir Peter Hall, took over in January 2010. The move from its dilapidated but much-loved “hut” space to a swanky new purpose-build — more than doubling the number of seats in the process — plus a succession of poor play choices by his predecessor Anthony Clark, had left the venue more than half a million pounds in debt and on the brink of closure.

“The building had no audience, the building was in debt and I had to make my model work in the first year,” says Hall. Not only did he have just 12 months to start turning things around, he couldn’t allow the venue to accumulate further debt of “one penny” or it would be closed.

His vision was audacious and very simple. “I said, ‘I’m going to make Hampstead an absolutely irreplaceable part not just of the new writing culture in this country but the theatre culture in this country’. What took a while to realise was that we [now] had a big stage [capacity for 325 rather than a 98-seat hut] that required plays with ideas, strong narratives and real attitude. Any insecurities would be amplified.”

His ambition didn’t stop there. “The other critical thing I said we had to do was open a studio theatre, because when I arrived there was a space downstairs that wasn’t putting on plays. So I created Hampstead Downstairs [where critics are not permitted to review], a little corner where, in a very unencumbered way, with absolutely no agendas, we’re putting writers’ plays on. It’s becoming increasingly hard to experiment anywhere without being punished for it if you get it wrong.”

Hampstead Downstairs is beginning to pay dividends: Amelia Bullmore’s Di and Viv and Rose moved up to the main house and there are rumours of a West End transfer for that, too, next year.

One of Hampstead’s abundant problems pre-Hall was that, increasingly beleaguered, it appeared to have adopted a bunker mentality and stopped listening to the wider theatre community. One of the first things Hall set about doing was “putting in the foot leather. I was going to see literary agents, directors, talking to as many people as would listen. ‘What do you think Hampstead Theatre is? What do you think Hampstead Theatre needs?’ I wanted to begin the process of saying to the world, ‘There’s going to be a change here’.”

He must have been nervous. “I was, all the time. I’m always nervous. Any artistic director will tell you this: although things might be going well in the present, you’re living your life six, eight months down the road.”

The tipping point of his first season came with Nina Raine’s Tiger Country, an ambitiously large-cast play about the NHS, with which Hall wanted to make a grand statement of intent. “There was a moment before we opened when the [ticket sales] advance was so bad I thought we were going to close, that was going to be it.” But the reviews were positive, audiences started to flock and Hall lived to fight another day.

Engaging and articulate as he is, Hall gives few interviews; it’s probably exhausting to have to plough through all that accumulated family history — his half-sister is Sam Mendes’s actress girlfriend Rebecca — each time. Talking about actress wife Issy van Randwyck and their two children is also not high on his agenda.

In a rare previous media outing, he mentioned that, in the course of getting Hampstead back on track, he had to make some compromises in his choice of programming. So is he now scheduling what he wants?

“Exactly what I want. It’s only once or twice when I’ve had to do something… I’ve never not been able to do something that I’ve wanted — that’s probably a better way of spinning it.” Large-cast plays — including Christmas sell-out Drawing the Line, with 17 actors bringing to life the 1947 partition of India — are sensibly interspersed with those requiring smaller numbers, to balance the books.

Hampstead now plays to an astonishing 98 per cent audience capacity, a figure to provoke jealousy across Theatreland. The shifting demographics of his punters are another thing that gives Hall satisfaction.

“Although 50-55 per cent of our audience comes from NW postcodes, the rest changes depending on what we do. What’s encouraging to me is that the myth that Hampstead audiences like one kind of play is just that, a myth. We’ve blown that wide apart. Last year we had what I think was the first play to have an all-Asian cast, The Arrest of Ai Weiwei, and a very different audience came through the doors.”

It’s been a long-accepted fact that Hampstead is under-resourced. It receives £875,000 from the Arts Council, annually, compared, say, to the Royal Court’s £2.2 million, also with two new writing stages and capacity in its main space of 360. Despite budgetary constraints, Hall has been enthusiastically exporting Brand Hampstead to the world, such as through the free live streaming of plays. (“It jumped the internet firewall in China,” he says proudly.)

One way he hopes to boost revenues is via a £450,000 summer revamp of Hampstead’s rather off-putting foyer/café/bar area in time for the autumn season in September. It always feels to me like a transit lounge, I say. “Exactly! It has a whiff of Stansted airport about it. So we’re going to cure all that,” he says.

Hall describes his time so far at Hampstead as “four of the hardest and happiest years of my life”. Like most theatre directors, he has even fitted in a few TV directing stints (including two Downton Abbey episodes). Even so, he has turned that daunting inherited deficit into a surplus of £475,000 and yet his future aims still branch out ambitiously. Not least among them, he says, is to shore up the theatre’s financial future “so that it isn’t addicted to me”.

What is evident is that there will be no resting on laurels. “I’m always wanting to be further down the track than I am, always. Otherwise I wouldn’t be good, I hope, at what I do. I’m always eager for the next thing. Push, push, push, push!’ With that, Edward Hall bounds back out into a very sunny afternoon.