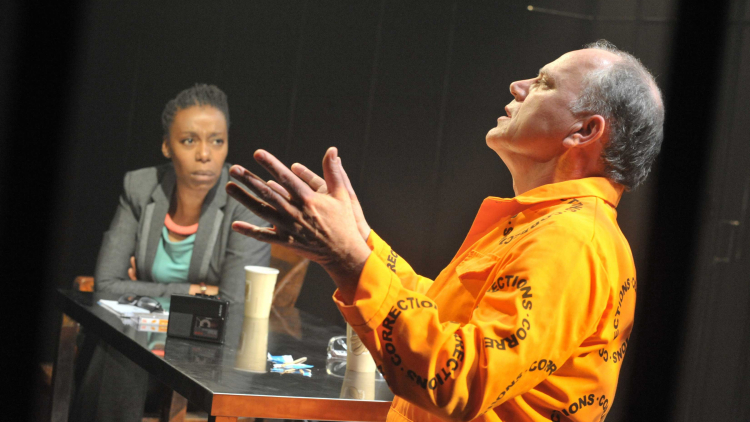 The Hampstead Theatre in London is bringing back A Human Being Died That Night after a brief run last year. Set in South Africa, its two characters are former policeman Eugene de Kock, now serving a 212-year sentence for crimes committed in the apartheid era, and the black female psychologist who interviewed him in jail.

Since the play premiered the two actors have had the extraordinary experience of meeting the real de Kock, regarded by many as a monster.

Noma Dumezweni says it’s always been clear London audiences are gripped by A Human Being Died That Night, the two-hander she’s performing with Matthew Marsh at the Hampstead Theatre.

“When Eugene de Kock was tried in 1996 there was huge outrage around the world at what he had done on behalf of the South African state.

“He killed and hurt a lot of people. But in London we worried at first that people would only vaguely remember the case.

“But it didn’t matter because in fact what fascinates and maybe surprises people is the theme of forgiveness and reconciliation. And that applies well beyond South Africa.”

Matthew Marsh says there was a different anxiety earlier this year taking the play to Cape Town and Johannesburg. “What would audiences make of actors turning up from London with this play about a horribly raw part of their recent history?

“Possibly younger audience members didn’t know much about de Kock but their parents did: there was a real frisson when they saw him on stage. The script gives de Kock a few jokes and I noticed in South Africa audiences found it hard at first to laugh at anything he says.”

It is hardly surprising that 20 years after apartheid ended South Africans find de Kock, at 65 living out his life in prison, a shocking figure.

From the early 1980s he ran the police counterinsurgency unit which hunted down those the state wanted to eliminate.

It was a ruthless death squad doing a job de Kock thought justified to safeguard the white-dominated society he had grown up in.

De Kock was found guilty on 89 charges, including murder. He has said he took no pleasure in arranging the bombings and kidnappings and acts of torture: he was acting on orders.

As the play shows, he resents that he may spend the rest of his life in jail whereas politicians of the apartheid era and some senior officers escaped by saying the right things to South Africa’s post-apartheid Truth and Reconciliation Commission.

Noma Dumezweni, born in Swaziland, plays Pumla Gobodo-Madikizela, the academic who in interviewed de Kock for some 40 hours and who wrote the book on which the play is based. “It’s interesting that Pumla now prefers not to talk of forgiveness but empathy,” she says.

“If through Pumla’s work we can understand the society that created de Kock that’s a real achievement. It’s too easy just to assume he was a monster and Nick Wright’s script doesn’t do that.”

Dumezweni and Marsh were able to meet de Kock when they performed the play in Johannesburg. Matthew Marsh says it wasn’t hard to arrange.

“He’s no longer in high security and he’s allowed two visitors a week. We were contacted by someone who’s writing a biography to ask if we’d like to meet him at Pretoria Central Prison. We got an hour with him.

“It’s a strange experience anyway meeting someone you’ve played on stage or screen but when it’s all happening in prison it’s even stranger.”

Noma Dumezweni was fascinated watching the real man. “At first I had a very simple reaction: Oh he’s taller than I thought. Then I was looking at him, searching for the man who did these terrible things. But you realise it’s just a human being in front of you.

“I was looking for any signals I should mistrust him or that he was manipulating us. But I ended up liking him.

“I liked his sense of humour and his awareness of himself. I liked his honesty about who he is and what his life has been and where he is now. I don’t think it was what we expected.”

Nicholas Wright was born in Cape Town but has lived in Britain for almost all his career as a writer and director. “I did wonder if people in South Africa might say, ‘Oh you sat out the dark days of apartheid in London so what right have you to write a play about our past?’ But no-one ever did.”

“When I read Pumla Gobodo-Madikizela’s book I thought it was wonderful and I knew it would make a play. Basically it’s just two people in a room. De Kock isn’t claiming he didn’t do what he’s accused of – but he expresses great repentance.

“It’s a little bit enigmatic because perhaps he hopes she may be able to get his grotesquely long prison sentence reduced. Personally I think he’s pretty genuine but he’s a complex character.

“The core of the original book is forgiveness. Pumla had nothing personally to forgive but many other people in South Africa suffered terribly at his hands. Yet I’m convinced he didn’t hate anyone.

“As he saw it, he was protecting white South Africa from an onslaught of black communists. And by the time we meet him in prison the scales have fallen from his eyes in a big way.

“So the play is about the fact that he isn’t a monster. He’s a flawed and difficult person, perhaps with a streak of violence in him. That violence was exploited and given free rein and no-one will excuse what he did. But he’s just a man.”

Nicholas Wright hopes people will see a relevance beyond the society the play is set in.

“Archbishop Desmond Tutu, who chaired the Truth and Reconciliation Commission, told us the play is continuing its work. I was delighted. But in lots of other countries too we need to keep thinking about what we do in the aftermath of terrible violence.”