Sunny Afternoon: ★★★★ from The Observer 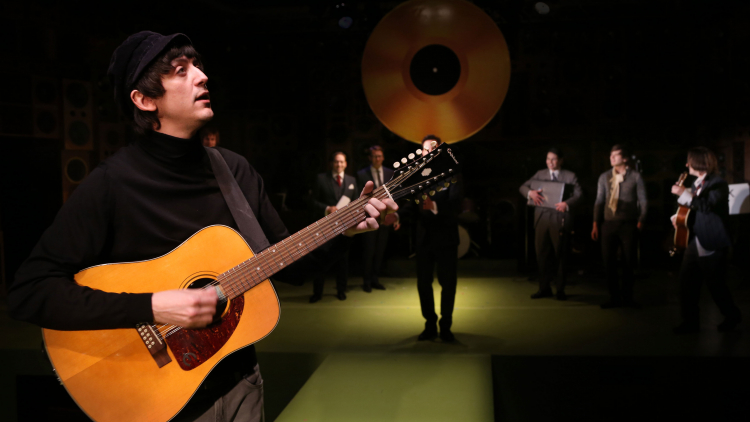 The Kinks musical Sunny Afternoon is a triumph for Ray Davies and Joe Penhall
By Susannah Clapp, The Observer

Sunny Afternoon rocks Hampstead’s repertoire. This is the first musical to be staged at the theatre and it’s a golden triumph. In the month that We Will Rock You closes, Edward Hall’s totally swinging production re-imagines the jukebox musical. This story of the Kinks has – compare Mamma Mia! and The Jersey Boys – both an inner life and a documentary value. In what seems to have been an ideal collaboration between the Kinks’ Ray Davies and the playwright Joe Penhall, Sunny Afternoon does what Stephen Ward the Musical could not do: it shows defining moments in the 60s from within, from the point of view of oiks, not of toffs.

The boys from Muswell Hill were different from other bands (groups, they were called back in 1964), not just because they were Brits but because they were not from the north. They went on being different because their songs were so magnificent and because they kept changing. It’s Ray’s songs you hear here, not those of his brother Dave, and it’s his story you follow. First there is the great thumping beat of You Really Got Me, which rips into the dulcet tones of a crooner at a ball stuffed with debs and stockbrokers. Later come the musical chronicles of commuters and lovers on Waterloo bridge, and the subtle complications of the title song, an ironic lament (“taxman’s taken all my dough”) set to a lovely, elastic, lounging sound.

Penhall has very skilfully embedded the numbers – sometimes heard in fragments, sometimes at exhilarating full rip. They can seem to steal quietly out of Davies so that you believe him when he says he makes a song in order to think. Yet they also push along the plot; often they actually describe it. All the major well-known events are here. The rivalry and tussles between the brothers; the onstage fight in which Dave gets knocked out by the drummer; the banning of the band from the States, cleverly derided by Davies père, who points out that the “most working-class band in the business is brought down by the unions”. A beautiful, totally unexpected moment has Days sung a cappella by the band’s departing managers, “a couple of old Tories having the time of their lives”.

George Maguire has an uncanny resemblance to Dave the Rave, helped by a ramrod straight bob that could only look good on Mary Quant. Using his guitar like a weapon, he manages to be both feral and touching, an anarchic imp who races round in a pink silk petticoat waving an axe. John Dagleish, though not a lookalike, is an excellent, alluring Ray, with a strong but tender voice.

Miriam Buether’s design cleverly encloses the action in walls of loudspeakers. The many Davies sisters are snazzily enclosed in those singularly–of-the-period long white skater boots, with knickers that match their bum-skimming frocks. And there is a revelation about one of those sisters that Penhall seems to have prised newly out of his collaborator.

Who could resist it? It even makes me forgive the Kinks for creating a song about a raddled old sot and calling it Susannah’s Still Alive.