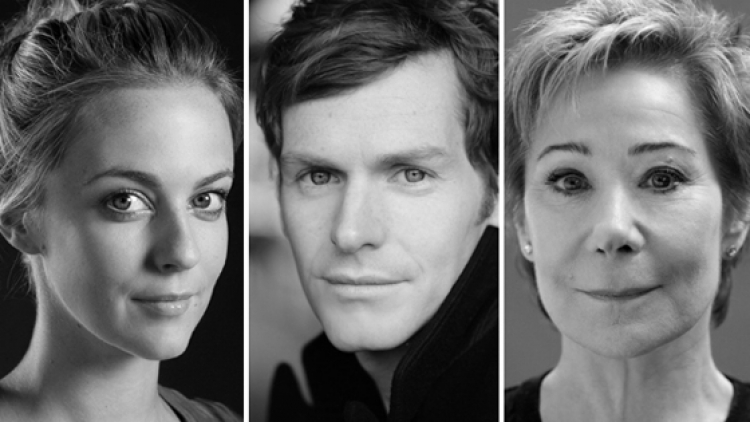 • £10 tickets available for under 30s for any performance as part of Hampstead’s Access for All scheme.

Following a sellout run Downstairs last year, Hampstead Theatre is proud to bring Peter Souter’s chic comedy, directed by Tamara Harvey to the Main Stage. Starring Shaun Evans and Miranda Raison, Hello/Goodbye is a modern metropolitan guide to falling in (and out of) love.

It’s a new year and Juliet, young, smart, and sassy, has got herself a fresh start in a new flat. But amidst the boxes, there’s a strange guy and he is also moving in. He says her agency has messed up and her flat is actually his flat – and he’s not leaving. And the real problem is that, well, he’s rather gorgeous…

Leading the cast are Shaun Evans and Miranda Raison.

Shaun Evans is perhaps best known for playing the young Morse in Endeavour. He has also been seen in The Last Weekend, Silk, Whitechapel, Come Rain Come Shine and Ashes to Ashes. Theatre credits include Miss Julie/Black Comedy (Chichester Festival Theatre), Kurt and Sid (West End) and Blue/Orange (Sheffield). His films include War Book, and Boy ‘A.

Miranda Raison was last on stage in Strangers on a Train (Gielgud, West End). Other stage roles include River (Royal Court), The Physicists (Donmar) and the lead in Anne Boleyn (Globe). Her films include After Death, I am Soldier and My Week with Marilyn, and on TV Live Another Day, Silk and as Isolde in Merlin.

Hello/Goodbye is writer Peter Souter’s first stage play. He has written for television the series Married, Single, Other and several popular BBC Radio4 plays including Goldfish Girl and Puddle. He co-wrote the first episode for the 10 Minute Tales, Deep & Crisp & Even starring Timothy Spall and Natascha McElhone.

Tamara Harvey returns to Hampstead Theatre to bring Hello/Goodbye to the Main Stage. She is currently directing Elephants at Hampstead Downstairs, where she also directed Simon Gray’s quartet In The Vale of Health which also made the journey upstairs to the Main Stage. Her numerous theatre credits include From Here to Eternity (West End), Educating Rita (Menier Chocolate Factory / UK Tour) and Whipping It Up (West End).

Stevie Smith commutes to the West End to her work as a secretary at a publishing company. Her evenings are spent at home with her beloved Aunt – a world of Battenberg cake, gossip, Ginger Nuts and sherry in tiny glasses. But at the same time as leading this seemingly mundane suburban existence, she is writing the piercing poetry and prose that will one day make her famous.

Stevie is a biographical snapshot of both the poet and the private woman. Shot through with wit, this is the story of an endearing heroine, her unconventional life, powerful and popular poetry and her greatest struggle: to keep waving and not drowning.

She wrote nine volumes of poetry. The first was titled A Good Time Was Had By All, which became a catchphrase referenced everywhere in popular culture. Her most famous poem is Not Waving but Drowning. She also wrote three novels, Novel on Yellow Paper, Over the Frontier and The Holiday.

Zoë Wanamaker makes a highly anticipated return to Hampstead Theatre where she last appeared in Terry Johnson’s Dead Funny, which transferred to the West End. Other theatre credits include Passion Play, All My Sons (both West End), and Much Ado About Nothing (National Theatre). Screen credits include Harry Potter, My Week with Marilyn and My Family.

Hugh Whitemore’s stage writing credits include Breaking the Code, A Marvelous Year for Plums, Pack of Lies and The Last Cigarette (with Simon Gray). Film includes The Return of the Soldier, 84 Charing Cross Road and Ultz and TV includes the award-winning drama The Gathering Storm. Stevie was made into a film with Glenda Jackson, Mona Washbourne, Alec McCowen and Trevor Howard.

Christopher Morahan’s was Associate Director at the National Theatre where his credits included the award-winning National Theatre and Broadway production of Wild Honey. Other directing credits include The Ragged Trousered Philanthropists and The Importance of Being Earnest (both Chichester Festival Theatre). Television work includes A Dance to the Music of Time, The Jewel in the Crown and The Glittering Prizes.
A co-production with the Chichester Festival Theatre

Full casting for both plays to be announced.

From the beginning of the new 2015 Season, £10 tickets will be available for every performance on Hampstead’s Main Stage.

Hampstead’s Artistic Director, Edward Hall said ‘At Hampstead, we believe in accessible theatre – Access for All. Already Hampstead Downstairs allows anyone to see new plays from £5 – £12 and we’ve worked hard to keep our main stage live-stream offerings free so as many people as possible across the world have access to our productions. We’re delighted to announce that from January we will be selling tickets from £10 for under 30s on our Main Stage. These are accessible for any and every performance on the Main Stage. There are a limited number so we advise advanced booking. We look forward to making Hampstead Theatre even more accessible to young people.’