Deposit: An interview with Matt Hartley 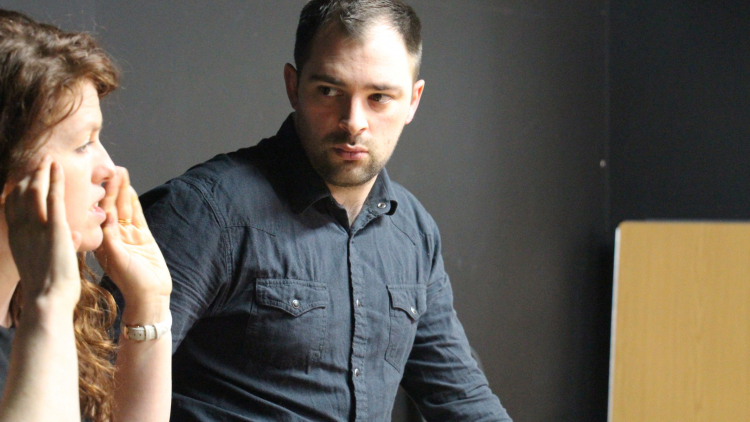 Deposit Writer Matt Hartley talks to Hampstead Theatre’s Online Features Editor, Susie Benson, about the inspiration behind his new play and the allure of London

Matt Hartley’s new play Deposit deals with one of the hottest conundrums of modern times. You’ve managed to find a job in London, and you’re with your ideal partner. The only problem is that your job does not pay you enough to live in the capital in the 21st century. You’re struggling to afford the rent and struggling to accumulate a deposit on your first property. How far would you go to protect your newly acquired life and status in London? How far would you go to stay in the game?

Hartley’s funny and thought-provoking take on the problem has two couples deciding to combine forces to cut rent and save for a down payment to buy. Deposit throws the four friends into a ‘very, very small one bedroom attic flat’. The bedroom can barely accommodate a bed. There is no door to the sitting room. In the script, Hartley describes the space feeling like ‘a cage, a prison, a UFC fighting ring, a zoo enclosure’. Hartley is interested in the consequences of living at very close quarters with people one knows well: how personality traits magnify and resentment can fester. Over the year that the play covers, money becomes an issue that divides and oppresses in different ways. Although Hartley himself has not lived in exactly the same situation as his beleaguered characters, he has watched the friendships of others unravel around him in similar ways; in particular, he remembers two couples who chose to live together to save money, but who had to distance themselves after the shattering experience. Their experience did provide Hartley with some juicy, comic material however.

‘Friends and money’, says Hartley. ‘It’s such a dangerous thing. That’s often the reason it falls apart in house shares. Whether you’re chasing for money or you’re the person who is late in paying.’

When Hartley did a workshop on Deposit with director Lisa Spirling last year, they realised the play was essentially about friendship and how it can splinter through jealousy or unequal status. Spirling, an adept director of comedy (Fault Lines, Hampstead Downstairs, December 2013) has known Hartley for ten years and they have a working ‘shorthand’, where he trusts her instinct on aspects that ‘need to be pushed’ and can ‘moan about the things I need to moan about’. They realised that the essential equation in the play would be the dynamic between the long-standing friends, Rachel and Melanie.

‘At a certain point in your life, the only conversations are about buying a house or getting married, and that’s what these characters are going through,’ says Hartley. ‘But what happens when people that you grew up with and shared so many experiences with, start to climb a little bit further on the ladder than you do? Does that hold you back as a person and does the friendship end?’

2014 saw a proliferation of headlines about London’s housing crisis. The Office of National Statistics cites median gross annual earnings as £27,000 in 2014, yet the average property price, according to Nationwide, is £400,000. Rent represents almost 60% of an average Londoner’s take home salary. Although _Deposit_’s scenario might appear extreme, it is no more radical perhaps than other controversial solutions being proposed, such as incentivising the elderly to move out of multi-bedroomed suburban properties, or encouraging Londoners to live in rented accommodation for their whole lives like the citizens of Berlin and Paris.

Overcrowding is rife and young urban workers are increasingly desperate to gain a foothold on the property ladder in order to kick-start their adult lives and begin families. Yet despite the challenges of living here, people want and need to stay. For Hartley’s four protagonists though, who grew up outside the capital, London represents more than just a place to work. London is a goal, a dream, the world of acceptance. There is a loss of face associated with ‘selling out’ and moving out of the city. Also as Hartley points out, if a friend is an hour away by train, they tend to ‘disappear from your life’.

‘I grew up outside Sheffield,’ says Hartley. ‘You thought all roads led to London. There is an allure about the city. The people in Deposit have really chosen to be in London. I think for a lot of people there’s a sense that you should be succeeding in financial or artistic terms if you’ve moved here.’

While casting the play, the creative team have been aware of gravitating towards actors who grew up outside the capital. Hartley feels that amongst non-Londoners there is a reflexive understanding of the yearning to live ‘in the big city’ and also an appreciation of the difficulty of realising that dream. Hartley wants to reflect that sense of a crowd of university friends from across the country via a ‘sonic representation of different accents, different voices’.

The problem of key workers struggling to live in the capital is constantly in the news. Only this month, the government announced an initiative for loaning public sector workers the deposit for rented accommodation in the capital. Deposit raises this question of what happens to the people who have chosen to do essential jobs in medicine or teaching, if they are forced out of the city? Hartley identifies the unfairness of playing a vital role in society but not being offered a solid future.

‘These people have partly chosen their jobs because they should offer stability, but when that does not return what they expect, they start questioning themselves and what they’re doing with their lives.’