Deluge: An interview with... 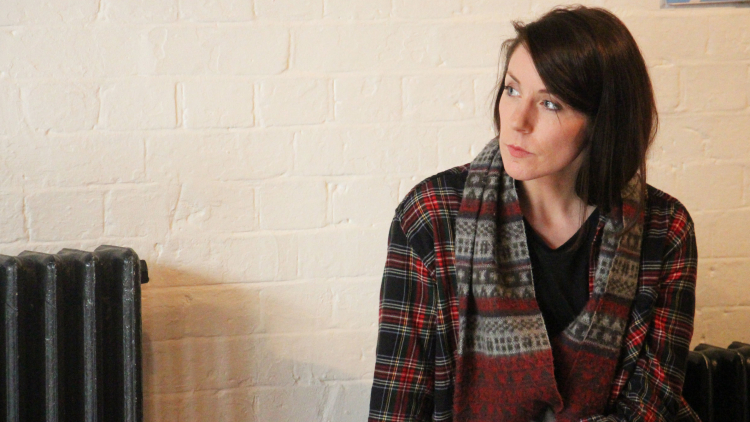 At precisely the time that Fiona Doyle and I are due to meet, the sunny spring sky darkens and it suddenly starts to rain hard. There’s a little bit of dramatic irony here and it’s not lost on the production team. The company are gathering to rehearse Doyle’s haunting new play, Deluge, at a watery location by the Regents Canal and as rain turns to hail, there are jokes about portents and omens. This is because, Deluge, as its title suggests, is a drama in which weather plays a prominent and catastrophic role.

Doyle is also slightly bemused by the stormy conditions on the first few days of rehearsal. London is rather an ‘assault on the senses’ anyway after rural Co. Kerry, Ireland, where she has been living and working since 2012. Although she made the decision to leave London to allow herself time and space to write, she is now finding that the landscape, culture and people of rural Ireland are having an inspirational effect on her work.

‘I’m fascinated by the place: the isolation, the harsh environment in winter, the angry tides, the deserted beaches and the little villages, still suffering post recession. There is a closeness to nature and animals; a texture and ruggedness to it all. All the dramatic windswept stuff, but also lots of beauty and light to be found here as well.’

Despite writing full-time for only three years, she has completed 6 full-length plays, and her work has received widespread recognition. In 2013, her play Abigail was longlisted for the Bruntwood Prize for Playwriting and So Gay won Play for the Nation’s Youth. 2014 was also a pretty good year, with Deluge winning the Eamon Keane Full-length Play Award and Coolatully being awarded the PapaTango New Writing Prize. The latter was also staged at the The Finborough and published by Nick Hern Books. She is excited to be at Hampstead Downstairs with Deluge so soon after Coolatully, delighted to be working with director Anna Ledwich (Four Minutes Twelve Seconds), who has done ‘a blinding job in casting’, and grateful to Jocelyn Abbey and the Joan Abbey estate for the funding.

Coolatully and Deluge could be said to share some commonality of theme in that both deal with aspects of recession in Ireland. Doyle believes that although the situation may be improving in cities, rural areas are still suffering. Coolatully however highlighted the plight of a generation of young men, affected by mass emigration and rising suicide rates, with a naturalistic depiction of ‘the real Ireland’; whereas Deluge posits a dystopian version, a ‘parallel universe’ vision of a country bedevilled by incessant rains, failing farms, and families unable to pay back their loans to the banks.

‘This play feels like a mesh of a lot of different things. It’s drawn from real situations, but it has become a world of its own’, says Doyle. ‘The recession was on my mind when writing, but also climate change. There was terrible flooding in areas of South-west Ireland. Farmers were appearing on the news crying in despair at it all. I’m fascinated by the human cost of how weather affects people who live off the land, whose livelihood depends on it.’

We’re chatting in a coffee shop of a major high street chain, and Doyle points to the disconnect between the mass production and unthinking consumption of food in everyday life. In Deluge, she aimed to project forward to a time and place where the tipping point of climate change has become tangible, ‘where the pressure is really on and things are really starting to fall apart.’ There are also hints in the play of a shadowy totalitarian regime, Doyle being interested in the idea that at some point governments will have to enforce a revolution in people’s behaviour because of the disastrous impact of climate change.

One can trace thematic strands in Deluge that could be said to recur significantly in contemporary Irish drama. For instance, the play considers the relationship between Ireland’s traditional past and its potential future via the interaction between the character of Flan, who has farmed the land for years, and the young couple, Kitty and Joe, who own the farm and owe the money. Flan reads biblical portent into the flooding, magnifying the sense of menace that ripples through the play. Without giving too much away, Doyle also plays enigmatically with the trope of spectral presence, which can be found too in the work of dramatists such as Conor McPherson and Sebastian Barry. However, despite tackling such serious issues, Doyle manages to inject some comedy into Coolatully and Deluge. In the latter, Flan provides some respite from the tragedy, an effective comic foil to Kitty and Joe’s trauma, and Doyle emphasises that ‘even with the bleakest of subject matters, you always have to strive to find the humour that does occur in real life.’

Doyle emphasises that although certain motifs might be detected in her plays, she does not start out thinking about theme, structure or plot. Instead she begins with a few characters in a particular situation and goes from there. It’s only much later in the process, while re-drafting, that she will start to re-shape and restructure. Deluge was inspired by a photograph in a newspaper of a woman alone in a stormy field under an electricity pylon. Caught by the atmosphere of the shot, she cut out the image and let it brood on her desk for a while.

Theatrical, atmospheric and melancholy, Deluge unfolds in a non-linear timeline that ‘draws the audience in’, provides a narrative tease, and gives the play a filmic feel. Inspired by dramatists such as Kane, Carr, Pinter and Beckett, she says her experiments with structure are unconscious initially, but emerge around the characters she is exploring and the stories she wants to tell. When she goes to the theatre, she wants to ‘see a story and characters that move me in some way, that connect to me or shake me up… I want to be stirred, and to feel something. I want my pulse to quicken.’

Doyle describes her journey into writing as ‘the long route round’. After training as an actor, she took a first-class degree in Drama and Theatre Arts from Goldsmiths, and then worked in Arts Education. Her ‘do I want to do it or not’ moment came after attending the inspiring John Burgess Playwriting Course, which convinced her to commit to writing full-time. The more Doyle writes, the keener she is ‘to experiment and push the boundaries’. She is not afraid of failure and trusts her ‘internal compass’ to indicate whether a play is working or not. When it isn’t, she ‘parks’ it, but will then return to look at it anew. The key for her is to write a first draft without interruption.

‘My gut tells me that right now in my life, commitment to writing is absolutely the right thing. Theatre is hugely fulfilling, as well as hugely precarious. It can be like a religious or spiritual experience. When the play’s really working, and you’ve got the liveness and the energy in the room, it’s just like electricity.’