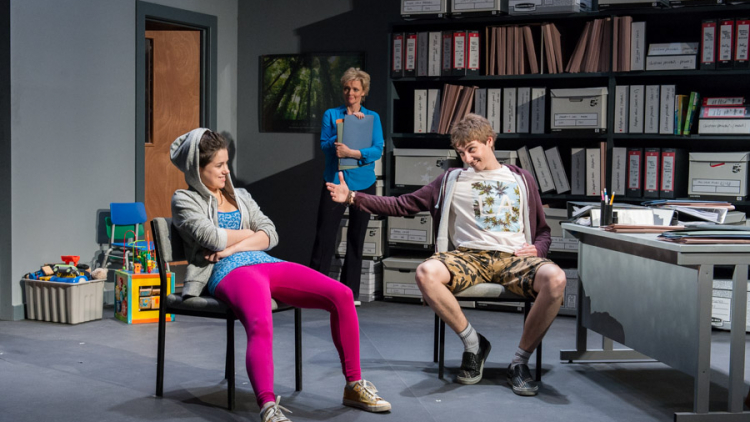 There is a complex, moral debate at the heart of Rebecca Gilman’s play which tackles child protection head on
By Michael Billington, Guardian

Rebecca Gilman does not shy away from big issues. Having written in the past about racism, stalking and sexual procurement, she now turns her attention, in a piece premiered in Chicago last year, to child protection. But her play is less a social tract than a fascinating moral debate whose central question – to whom does a baby really belong? – put me in mind of Brecht’s The Caucasian Chalk Circle.

Gilman’s virtue is that she starts with what looks like a clear-cut situation that gradually grows more complex. Caroline, a hard-pressed Iowan social worker, supervises a case in which the six-month-old baby who gives the play its title has been hospitalised. The parents, Karlie and Peter, are teenage meth addicts who look incapable of bringing up a child. It seems perfectly right that the baby should be handed over to Karlie’s mother, Cindy, for kinship care. Doubts only arise when Cindy requests permanent adoption. Is it better for the child to be reared by a rabidly evangelical grandmother or eventually to be reunited with the rehabilitated parents?

This moral dilemma is only the starting point for a play that shows how no one approaches such a case without personal bias. Caroline, although strenuously professional, seems to have a prejudice against people of faith: on the other hand, she faces twin pressures from Cindy’s pastor and her own boss, who at one point jointly coerce her into an act of prayer.

Gilman herself could be accused of loading the dice since the play’s three Christians are all seen to be devoutly manipulative. But what makes this a grippingly intelligent play is that it shows how life-determining decisions are subject to both gut instinct and harsh reality. The apparently well-ordered Caroline clearly projects her own traumatic memories on to the case while operating in an all-too-recognisable world where budget cuts limit the possibilities for reformed drug users.

Michael Attenborough’s well-staged production makes you eager to know what happens next and is full of good performances. Sharon Small catches exactly Caroline’s mixture of outward objectivity and private passion, Rachel Redford and Alexander Arnold are wholly plausible as the baby’s messed-up but potentially salvageable parents, and both Caroline Faber as the comfortable-seeming Cindy and Corey Johnson as an unctuous pastor hint at the dangers of religious zeal. In one way, Gilman’s play is deeply American, but it also tackles a universal dilemma and, at a time when welfare cuts have become a political mantra, gains a frightening local topicality.