A Cup Of Tea With... Firebird's Callie Cooke 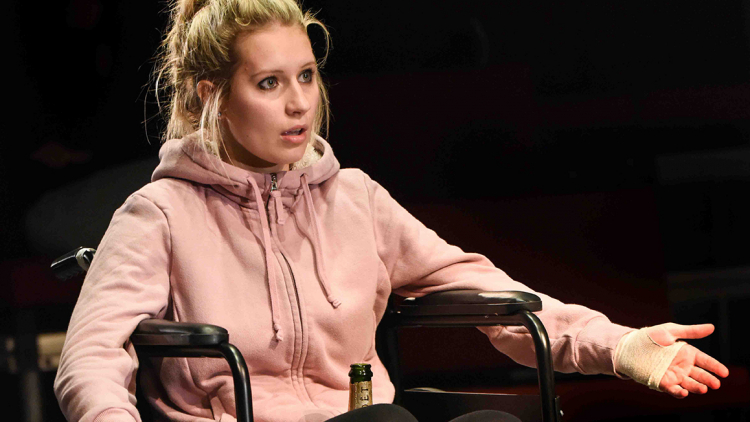 We grabbed five minutes to chat with Callie Cooke about Doctor Who, the perils of quick changes and the joys of playing a rodent. Callie is starring in Firebird which runs Downstairs until 24 October.

Welcome to Hampstead Callie. You’re now in the full swing of your first professional stage role, Firebird – how’s it all going?

Thanks! Yeah I’m a right proper grown up actor now. It’s going really well, I’m still getting used to the fact that I get to do it every night, it doesn’t feel like a job at all. I think people are getting a lot from the show and that’s what we want.

Can you describe Firebird in a nutshell?

Blimey that’s hard but I’ll give it me best shot. So, Tia is a firebird I guess, she’s a young girl who didn’t get the greatest of starts in life and she falls into a vicious trap. It’s about child exploitation and Tia represents the girls who genuinely live through this every day. Ultimately it’s a story of hope- unfortunately based on truth.

What attracted you to Firebird?

When my agent first put me up for it – she was really excited by the script. So I had a good feeling about it before I’d even read it. Then I read it and literally couldn’t breathe by the time I got to the end. I just instantly felt a massive connection to Tia and I was like, I want to do this and I want to do these girls justice.

Tell us a little more about your character Tia.

I proper love this girl I do. Tia is streetwise, mouthy, vulnerable – basically most 14 year old girls but she’s a really troubled kid. Everyone has let her down or never given her any time and that’s why she trusts AJ so easily. My favourite part of Tia is how much she can love, even after all she’s been through, her love for her best friend pulls through in the end.

Any embarrassing moments on stage so far?

Well I’m a really embarrassing person so I’m amazed more things haven’t happened. The other night I did put my head through the sleeve of my dress instead of the neck bit – my changes are so quick that I decided to just go on anyway and I looked a bit like a chicken. We’re only in week 2 so I’m guaranteed to fall over, just watch this space. At drama school I was pretending to be a snake (as you do) and I was obviously so convincing that my mate who was being a jaguar fell over and broke her foot – I’m a curse.

Since rehearsals started its been hard to see stuff but one of the recent things I saw and loved was Violence and Son at The Royal Court – it was epic! The acting was so good. I love that place.

Well I left school and then came straight to drama school, and I’m from the most ridiculous tiny village in the Midlands where nobody knows what acting is, so this is my first proper job. Not to brag or anything but I did play a rat in the school nativity, so I’m kind of a big deal.

Ok so I really want to be the next Doctor Who’s apprentice. But then getting to represent girls like Tia really is something, stuff that makes a difference.

Working with Ed [Hall] has taught me so much, so I pretty much hold on to his every word. Also my head of acting at drama school, Gareth Farr, always says the right thing, to just do work that you’ll be proud of in years to come, and I’m lucky that that’s exactly what I’m doing.