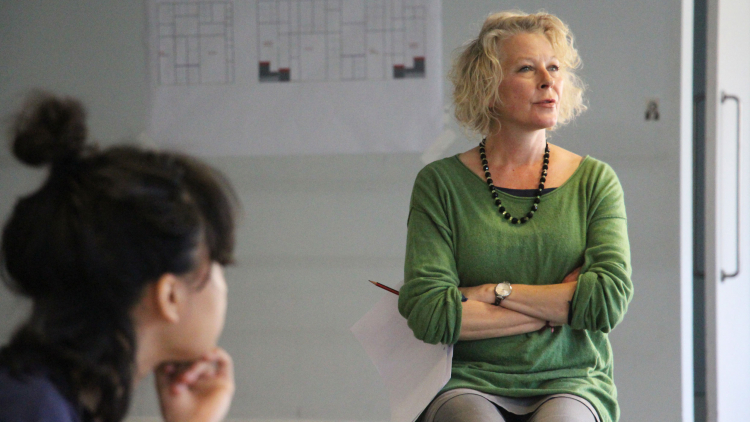 Josh and Lydia are captivated by the arrival of fellow student Charlotte. Not only is she exceptionally smart, gaining top marks in all her essays and offering fresh insight during seminars, she’s also significantly older and curiously private. Where is she from and what is her history? Why has she enrolled at university now? As the relationship between the undergraduates deepens so does the mystery surrounding Charlotte…

Lighting design is by Mark Howland, and sound design by James Frewer.

Will Mortimer’s debut play is a warm and witty comedy that explores unlikely friendships, second chances, and how the thrill of learning is not just for the young.

Makir Ahmed is a recent graduate from the London College of Music. He has appeared on stage in Party Time, The Tale of the Wolf and the Shepherd and Prosopopeia (Arthur Cotterell Theatre); on TV in Casualty and Doctors, and in film in Colours.

Stella Gonet is perhaps best known for her leading role in The House of Elliot. Many stage appearances include Skylight, Racing Demon, The Shaughraun, The Voysey Inheritance and Hamlet (National Theatre), Measure for Measure, A Midsummer Night’s Dream, Three Sisters and The Revenger’s Tragedy (RSC). On TV she has also appeared in Holby City, Humans, Persuasion, How I Live Now and Silk, and in film Dirty Bomb, Nicholas Nickleby, For Queen and Country and Red Mercury.

Issy van Randwyck returns to Hampstead following Raving in 2013. Her many other stage appearances include Closer than Ever (Jermyn Street Theatre), The American Clock (Finborough Theatre), Reason for the Season (West End), No Naughty Bits (Hampstead Theatre), Marilyn Monroe in Becoming Marilyn (Riverside Studios/Assembly Rooms), Arcadia, The Man Who Came to Dinner, A Small Family Business and Song of Singapore (Chichester Festival Theatre), A Little Night Music and Once in a Lifetime (National Theatre). TV appearances include Partners In Crime, Downton Abbey, Christopher and His Kind, Spooks, Kingdom and Trial and Retribution.