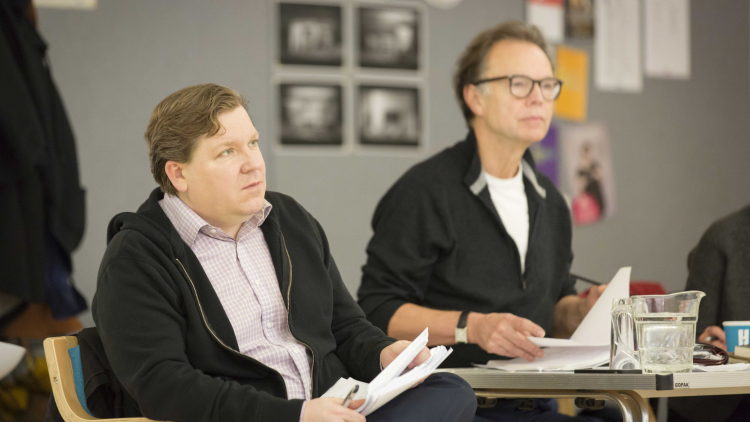 ‘There are shades of Mamet in the rat-a-tat dialogue, but Lindsay-Abaire has a bigger and more generous heart’ The Telegraph

David Lindsay-Abaire is a playwright, lyricist and screenwriter. He returns to Hampstead following the sell-out hit Good People starring Imelda Staunton and Lloyd Owen. During its subsequent run in the West End, Imelda’s incredible performance earned her a well-deserved Olivier nomination for Best Actress. When Good People premiered on Broadway, it was named Best Play of the Year by the New York Drama Critics Circle.

Lindsay-Abaire’s Rabbit Hole premiered on Broadway and received the 2007 Pulitzer Prize for Drama as well as five Tony Award nominations including Best Play, and the Spirit of America Award.

His play Ripcord opened Off-Broadway in October this year at the Manhattan Theatre Club. Directed by David Hyde Pierce, the cast features Marylouise Burke, Rachel Dratch and Holland Taylor. The play focuses on two roommates in a retirement home, who devise dirty tricks to torment one another.

Lindsay-Abaire wrote the book and lyrics for Shrek The Musical, which was nominated for a Grammy, eight Tony Awards and four Olivier awards. Prior to this David was awarded the Kleban Award as America’s most promising musical theatre lyricist.

His other plays include Fuddy Meers, Kimberly Akimbo, Wonder of the World, High Fidelity and A Devil Inside.

In addition to his work in theatre, David has written six screenplays. His credits include his film adaptation of Rabbit Hole, starring Nicole Kidman and Aaron Eckhart. Kidman’s performance earned her an Oscar nomination.

He also wrote the screenplay for DreamWorks Animation, Rise of the Guardians. Another film penned by Lindsay-Abaire is the forthcoming Family Fang, starring Nicole Kidman, Jason Bateman and Christopher Walken.