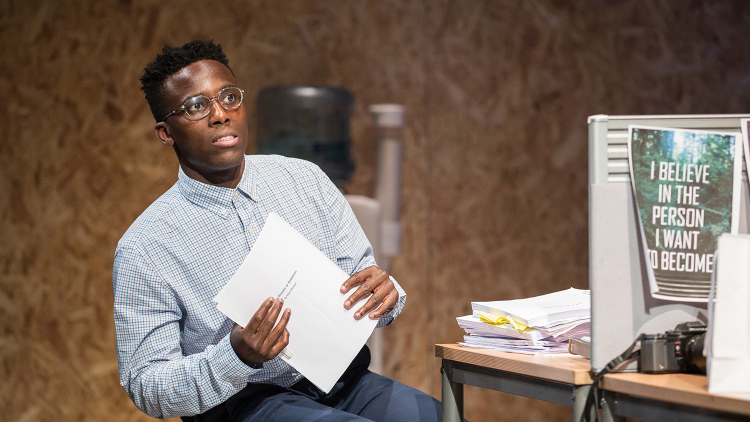 'Something happens just before the interval in US playwright Branden Jacobs-Jenkins' Gloria that shocks, viscerally.'

'Out of the blue and on a sixpence, the play transforms from a farcical office satire - and a hilarious one, too - into an unsettling examination of contemporary employment culture, of unseen societal hierarchies, and of the distasteful rat race of grief that inevitably accompanies tragedy.'

'The first half plays out like a darker, meaner episode of The Office. A trio of assistants and an intern bicker their way through the morning in the edit suite of a New York magazine publisher, fuelled by professional frustration, jealousy and coffee.'

'Then, the something happens, and the two-act second half – for which Lizzie Clachan's astutely textured design shifts from a Starbucks to the lobby of a new-age California media firm – pours over the richly emblematic reverberations.'

'Michael Longhurst directs a tightly wound production, his six-strong, multi-roling cast – all exceptional, particularly Colin Morgan as a nerve-addled wannabe writer and terse IT grunt, and Ellie Kendrick as a variety of bubbly colleagues – inflecting Jacobs-Jenkins' comedy-drama with a disconcerting tension.'

'Gloria is just glorious, ultimately. It's the second invigorating UK debut in as many months from an insightful, intelligent, impish and hugely welcome transatlantic voice.'