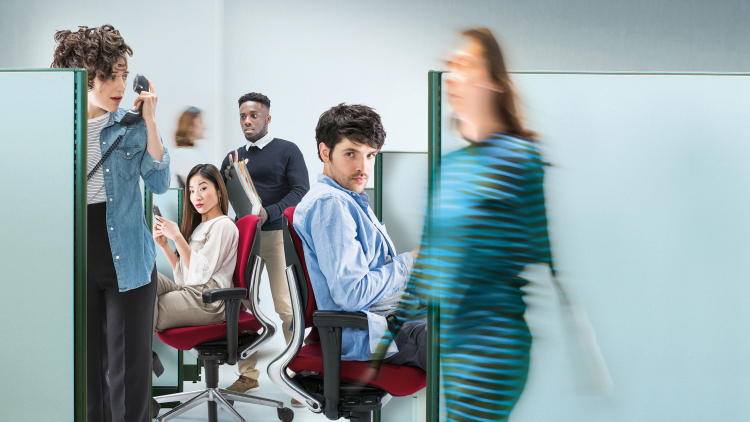 ‘Aren’t you turning thirty any day now? I will die before I turn thirty in a cubicle.’

Hampstead Theatre presents the UK premiere of Branden Jacobs-Jenkins’ Gloria, a finalist for the Pulitzer Prize for Drama in 2016, directed by Michael Longhurst. Colin Morgan and Ellie Kendrick will make their Hampstead Theatre debuts in this razor-sharp comic drama which focuses on ambition, office warfare and hierarchies, where the only thing that matters is moving up the ladder and selling out to the highest bidder.

New York. A city that runs on ambition – and coffee.

In the offices of a notorious Manhattan magazine, a group of ruthless editorial assistants vie for their bosses’ jobs and a book deal before they’re thirty. But trapped between Starbucks runs, jaded gossip and endless cubicle walls, best-selling memoir fodder is thin on the ground - that is until inspiration arrives with a bang…

Kae Alexander’s theatre credits include Peter Pan (Regent’s Park Open Air Theatre) and Teh Internet is Serious Business (Royal Court). Television credits include Uncle, Fleabag, Bad Education, We The Jury, One of Us and Game of Thrones. Film credits include The Bad Education Movie and The White Room. Kae also has a role in the film Ready Player One which will be released next year.

Sian Clifford’s credits include Time and the Conways (Nottingham Playhouse), Fever (Jermyn Street Theatre), Good Clean Fun (Soho Theatre), Beauty and the Beast and Pains of Youth (National Theatre). Television credits include Fleabag, Midsomer Murders and Dark Matters, and film credits include The Communists, Paddy and The Other Me.

Bayo Gbadamosi’s theatre credits include I See You (Royal Court), Little Revolution (Almeida), Mad About The Boy (Unicorn Theatre, Bush Theatre and Young Vic), The Gods Are Not To Blame, The Litter and Uncle Vanya (Young Vic). Television and film credits are Swarm, Doctor Who and Casualty.

Ellie Kendrick’s recent theatre credits include Cyrano de Bergerac (Southwark Playhouse), Pests, The Low Road, In the Republic of Happiness (Royal Court) and Romeo and Juliet (Shakespeare’s Globe). Her recent television credits include Game of Thrones, Misfits, Chickens, Being Human, Upstairs Downstairs and The Diary of Anne Frank. Film credits include The Levelling, Whisky Galore, Love is Thicker Than Water, Native, Cheerful Weather for the Wedding and An Education.

Colin Morgan's theatre credits include Mojo (Harold Pinter Theatre), The Tempest (Shakespeare's Globe), Our Private Life (Royal Court), A Prayer For My Daughter, Vernon God Little (Young Vic) and All About My Mother (The Old Vic). Colin's television credits include The Living and The Dead, Humans, The Fall and Merlin. His film credits include The Huntsman: Winter's War, Legend, Testament of Youth and Island. Colin also has roles in upcoming films The Happy Prince, Waiting For You and The Rising:1916.

Branden Jacobs-Jenkins’ credits include Everybody (forthcoming at the Signature Theatre), War (LCT3/Lincoln Center Theater), Gloria (Vineyard Theatre; Pulitzer Prize-finalist), Appropriate (Signature Theatre; Obie Award), An Octoroon (Soho Rep; Obie Award) and Neighbors (The Public Theater). He is a Residency Five playwright at Signature Theatre and under commissions from LCT3/Lincoln Center Theater, MTC/Sloan, and the Steppenwolf Theatre Company. His recent honors include the MacArthur Fellowship, the Windham-Campbell Prize for Drama, the Benjamin Danks Award from the American Academy of Arts and Letters, the PEN/Laura Pels International Foundation Theatre Award, the Steinberg Playwriting Award, and the Tennessee Williams Award.  He currently teaches in the Hunter College Playwriting MFA Program, where he is a Master-Artist-in-Residence.

Michael Longhurst is an award-winning stage director. He directed the production of Peter Schaffer’s Amadeus at the National Theatre which ran until March 2017 and received exceptional reviews when it opened in November 2016 in the Olivier. His Royal Court production of Nick Payne’s Constellations starring Golden Globe winner Sally Hawkins and Rafe Spall transferred to the West End, winning the Evening Standard Award for Best Play 2012 and receiving four Olivier award nominations. Constellations transferred to Broadway, starring Jake Gyllenhaal and Ruth Wilson to stunning reviews in January 2015. He also directed Academy Award nominee Jake Gyllenhaal in his American stage debut at the Roundabout Theatre, New York in Nick Payne’s If There Is I Haven’t Found It Yet. He has developed and directed new plays across the UK including Adam Brace’s Stovepipe; a promenade co-production with the National Theatre, which featured in the Sunday Times ‘Best Theatre of the Decade’ list. Michael is also a recipient of the Jerwood Directors Award at the Young Vic (Dirty Butterfly) and a Fringe First (Guardians). He trained in directing at Mountview after reading Philosophy at Nottingham University. Michael is currently an Associate Director for Nuffield Theatre. In 2015, the Evening Standard named Michael as one of the 1000 most influential Londoners.