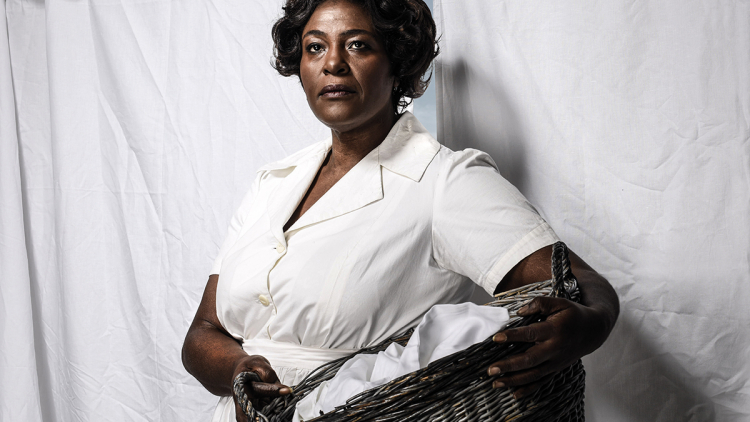 Book and lyrics by Tony Kushner

‘That old copper statue by the Courthouse downtown, honouring the dead Confederate soldier, ain’t there no more…’

1963. In quiet Lake Charles, Louisiana, the destruction of a Confederate statue might just signal that change is in the air…  But, whatever the progress of the civil rights movement, in the Gellman household things seem just the same – for now at least.  Eight year old Noah, heartbroken by the death of his mother and his father’s remarriage, sneaks down to the basement to spend time with the black maid he idolises, Caroline Thibodeaux: Caroline who runs everything.  Whilst the basement may seem a fantastical place - even the appliances have a voice of their own - Caroline’s work there is repetitive and badly paid.  But when Mrs Gellman comes up with a way for her to take a little more money home, the consequences for Caroline and Noah’s relationship are not what anybody might have expected…

An Olivier Award-winning musical with a hugely original, highly eclectic and uniquely American score, Caroline, or Change creates an uplifting and profound portrait of America at a time of momentous social upheaval.

Tony Kushner returns to Hampstead following The Intelligent Homosexual’s Guide to Capitalism and Socialism with a key to the Scriptures in 2016 and Slavs! in 1994. Kushner's plays include A Bright Room Called Day, Angels in America - Parts One and Two and Homebody/Kabul. As well as Caroline, Or Change his collaborations with composer Jeanine Tesori include the opera A Blizzard on Marblehead Neck. Kushner has adapted and translated Pierre Corneille's The Illusion; S.Y. Ansky's The Dybbuk; Bertolt Brecht's The Good Person of Szechwan and Mother Courage and Her Children and the English-language libretto for the opera Brundibár by Hans Krasa. He wrote the screenplays for Mike Nichols' film of Angels in America, and for Steven Spielberg's Munich and Lincoln. His books include Brundibár, with illustrations by Maurice Sendak; The Art of Maurice Sendak, 1980 to the Present and Wrestling With Zion: Progressive Jewish-American Responses to the Palestinian/Israeli Conflict, co-edited with Alisa Solomon. Kushner is the recipient of a Pulitzer Prize, two Tony Awards, three Obie Awards, two Evening Standard Awards, an Olivier Award, an Emmy Award, two Oscar nominations and the Steinberg Distinguished Playwright Award, among other honours. In 2012, he was awarded a National Medal of Arts by President Barack Obama.

Jeanine Tesori won the Tony Award for Best Original Score with Lisa Kron for the musical Fun Home. She has also written Tony-nominated scores for Twelfth Night (Lincoln Center); Thoroughly Modern Millie (lyrics, Dick Scanlan) and Shrek - The Musical (lyrics, David Lindsay-Abaire). The National Theatre’s 2006 production of Caroline, Or Change received the Olivier Award for Best New Musical. Her 1997 Off-Broadway musical Violet (lyrics, Brian Crawley) opened on Broadway in 2014 and garnered four Tony nominations, including Best Musical Revival. Operas include A Blizzard on Marblehead Neck (libretto, Tony Kushner, Glimmerglass) and The Lion, The Unicorn, and Me (libretto, J. D. McClatchy, Kennedy Center). Music for plays includes Mother Courage (dir. George C. Wolfe, with Meryl Streep and Kevin Kline); John Guare's A Free Man of Color (Lincoln Center Theater, dir. George C. Wolfe) and Romeo and Juliet (Delacorte Gala). Film scores include Nights in Rodanthe; Every Day and You're Not You. Jeanine Tesori is a member of the Dramatists Guild and was cited by the ASCAP as the first female composer to have two new musicals running concurrently on Broadway. She is the artistic director/co-founder of A Broader Way, an arts empowerment program for girls from underserved communities; the founding artistic director of Encores! Off-Center; and a lecturer in music at Yale University and Columbia University.

Michael Longhurst is an award-winning stage director. He returns to Hampstead Theatre following his acclaimed production of Gloria last summer. His lauded production of Peter Shaffer’s Amadeus at the National Theatre featuring live orchestral accompaniment from the Southbank Sinfonia is currently playing its second run in the Olivier.  Michael’s Royal Court production of Constellations starring Sally Hawkins and Rafe Spall transferred to the West End, winning the Evening Standard Award for Best Play and received four Olivier award nominations, and ran on Broadway starring Jake Gyllenhaal and Ruth Wilson who was Tony-nominated. He also directed Jake Gyllenhaal in his American stage debut at the Roundabout Theatre, New York in If There Is I Haven’t Found It Yet. Other theatre includes Bad Jews (West End, Theatre Royal Bath & UK tour), They Drink It In The Congo and Carmen Disruption (Almeida), ‘Tis Pity She’s A Whore and The Winter’s Tale (Sam Wannamaker Playhouse), Linda, The Art of Dying, Remembrance Day (Royal Court), A Number (Nuffield & Young Vic), Cannibals (Royal Exchange, Manchester), The History Boys (Sheffield Crucible), Dealer’s Choice (Royal & Derngate), The World Of Extreme Happiness (NT Shed), Stovepipe (site-specific promenade with the National Theatre, HighTide & Bush Theatre, Sunday Times’ Top Ten Theatre Events of the Decade), Midnight Your Time (HighTide), On The Beach (Bush Theatre), On The Record and Gaudeamus (Arcola), dirty butterfly (Young Vic, winner of the Jerwood Directors Award), Guardians (Pleasance & Theatre503, Fringe First Award). Michael trained in directing at Mountview after reading Philosophy at Nottingham University. In 2015, the Evening Standard named him as one of the 1000 most influential Londoners.

Hampstead Theatre in association with ATG presents the Chichester Festival Theatre production of Caroline, or Change.