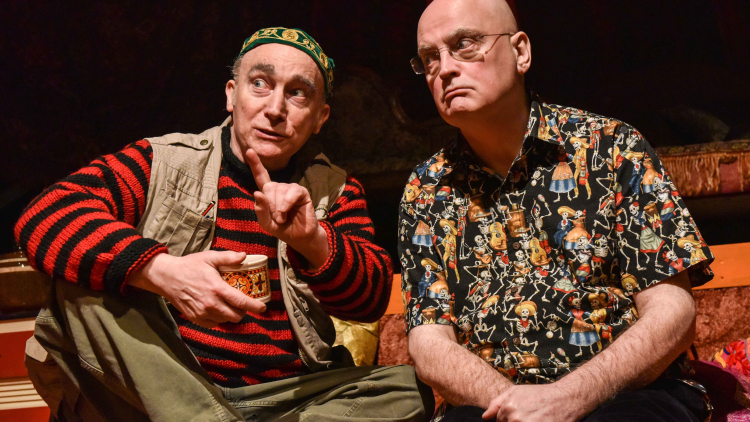 'Ken Campbell, we learn in Terry Johnson's caustic stage memoir, would not tolerate sarcasm. Which is a little rich because his public voice, a controlled, half-sodden whine, dripped with it. That nasal sneer-and-grin made him a familiar figure in sitcoms and on the comedy circuit for four decades, a jack-the-lad more puckish than Puck whose physical energy was surpassed only by an irrepressibly mutable creative spirit.'

'It's hard to believe that Cambell's been dead ten years already and a generation of theatregoers is growing up unaware of the man beyond a single episode of Fawlty Towers; but playwright Terry Johnson, with whom Campbell had an uneasy on-off working relationship over several years, keeps the flame alive in this two-hander first seen at Hampstead Theatre in 2016.'

'The Bunker, decked out by designer Tim Shortall as a weed den replete with scatter cushions, lampshades and incense burners, makes a friendly home for Johnson's warmly naughty play. It also hints at hallucination as the man himself comes back to life in an extraordinary assumption by Jeremy Stockwell, a mime, mimic and clown who's a dead ringer for Ken only because he chooses to be. When he drops into other characters, for instance a wickedly spot-on Trevor Nunn, his Campbell disappears from view.'

'All the world's a stage for Stockwell as he smashes through the audience and crashes his lines with gleeful abandon. Nowhere is safe from his hurtling presence. The narrator, by contrast, spends most of the evening at a lectern. This is Terry Johnson himself, played as in life by Terry Johnson himself.'

'Yet Ken is a scabrous romp by any standards and you don't have to be a connoisseur of Campbell to enjoy it. Johnson has handed directing duties to Lisa Spirling and returned to his origins as an actor for a 100-minute tale that's closer to home than any of his other biographical plays. It's a bruising, self-revealing trawl through memories of working with a genius who looked like a mountebank but poured his soul into art. Johnson namedrops shamelessly (our own Michael Coveney crops up more than once, as do many a critic and household star) and not always in a complimentary way. There's a distinct sense of the verbatim about his exchanges with Campbell, and too bad if anyone feels hurt by them.'

'The sustained elation dips towards the end during a lengthy reflection on Campbell's funeral, but for the rest it's a comic play that's all the more potent for being drawn from the personal experience of both players. Stockwell's re-enactment of the moment Campbell bequeathed him his trademark pork-pie hat is touching but thankfully not maudlin. Ken would have hated that.'

'The Bunker is worth a visit if you haven't been. It's a welcoming space directly beneath the Menier Chocolate Factory. Barnum's playing upstairs, the musical about a freak-show circus man. Ken would have relished the irony.'