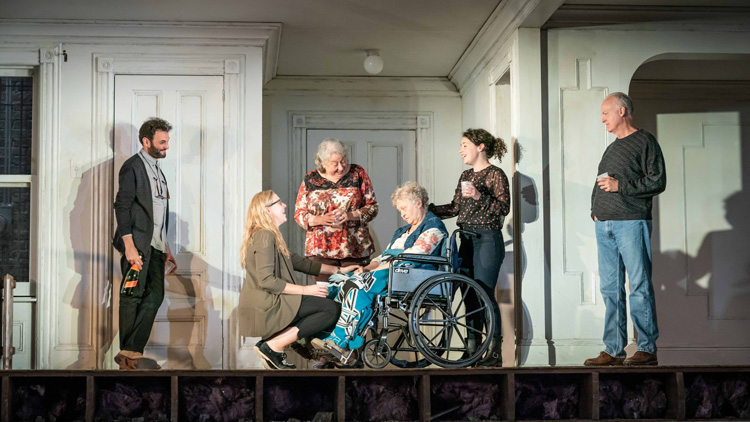 'On a distant planet inhabited by a monstrous race of beings with teeth growing down their backs, they tell scary stories about these other aliens who are really scary — called Humans… Such is the idea behind the title of this superb play by Stephen Karam, still in his thirties, which was praised to the skies in New York, won four Tonys and comes to the Hampstead with the original American cast. It’s definitely a must-see.'

'To be honest, the idea of humans as monsters is one of the few here that doesn’t quite gel, because Karam’s depiction of a loving, squabbling, traumatised family, the Blakes, is too empathetic and generous to make them monsters. It is little short of astonishing, though, that in just 95 minutes, his play gives us a blackly comic family drama, a spooky supernatural foray into the characters’ subconscious and an unforgettable “state of the nation” portrait of America today, while never once feeling overburdened with ideas and themes.'

'The Blakes reunite for Thanksgiving in the flat their daughter Brigid has just moved into in New York’s Chinatown. The direction by Joe Mantello is top-notch (as is David Zinn’s set design), as they bicker and crosstalk, buoy up and put down. The actors inhabit their roles to perfection, with Jayne Houdyshell especially good as mom Deirdre, her relationship with Brigid (Sarah Steele) made up equally of love and tactlessness.'

'As a family drama, it’s funny, moving and engaging. Perhaps the miseries are laid on a little thick: there’s illness, career failure, heartbreak, debt, adultery and dementia, which for the sufferer means “slowly becoming someone I don’t know”. But life can be like that sometimes, and every team has a rotten season now and again.'

'This is a play to engage both heart and mind, full of human warmth and black, bitter comedy, and one to think about and brood on for hours afterwards.'