FULL CAST ANNOUNCED FOR THE KING OF HELL'S PALACE 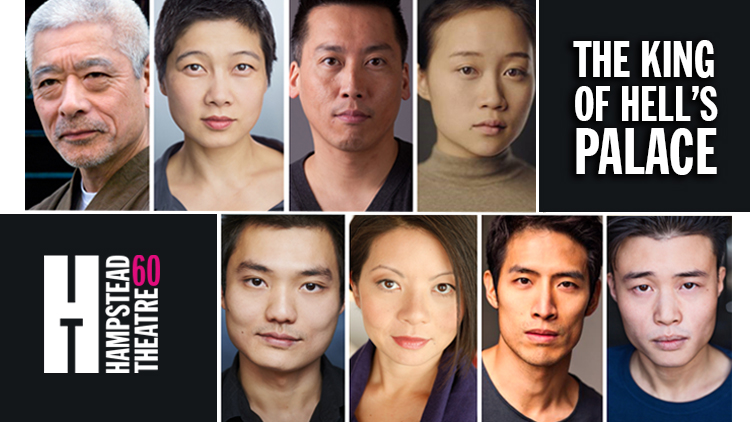 THE KING OF HELL’S PALACE

‘It doesn’t matter if the cat is white or black. As long as it catches mice, it is a very good cat’

Hampstead Theatre today announces the full casting for the world premiere of Frances Ya-Chu Cowhig’s blazing thriller The King of Hell’s Palace. Directed by Michael Boyd, this new play is based on the true story of a whistleblowing heroine and her extraordinary mission to expose a cover-up of epic proportions. The cast includes Aidan Cheng, Celeste Den, Tuyen Do, Christopher Goh, Togo Igawa, Vincent Lai, Kok-Hwa Lie and Millicent Wong.

Henan Province, 1992. China is laying the foundations for global wealth and power - business is booming. Yin-Yin, a young Ministry of Health official, finds herself recruited into a new and unusual trade that boasts infinite stock and infinite demand. But amidst the hype and the soaring profits, she rapidly uncovers an unimaginable secret that will test to the limit her loyalties to her profession, to her family and to her country...

‘I am thrilled to be premiering The King of Hell’s Palace at Hampstead Theatre this autumn. The development of this play began six years ago in Salt Lake City with interviews with Dr. Shuping Wang, the former Chinese public health official whose experiences as a whistle-blower in the Henan AIDS crises inspired me to write this play. The story of the Henan Ministry of Health's Plasma Collection Centers, a tale of how government and corporations literally profited off selling the blood of poor people, has long felt to me like a potent way to think about industrialisation and global capitalism. As we grow increasingly conscious of the devastating ecological consequences of ignoring scientific evidence and the generational and societal costs of corporations and governments who privilege profit over people, the themes and questions the play asks are only becoming more relevant and resonant. It is an honour to bring this story to a world premiere production under the skilful eye of the brilliant Michael Boyd, with a remarkable cast of actors. I look forward to sharing The King of Hell’s Palace with you in September.’

Celeste Den plays Yin-Yin/Luo-Na having been part of The King of Hell’s Palace workshop at The Goodman Theatre in Chicago, 2016. Her theatre work in the UK includes Wild Swans (Young Vic). Other theatre work includes M. Butterfly (Broadway); Chinglish (Berkeley Repertory Theatre, South Coast Repertory/Hong Kong Arts Festival); Water by the Spoonful and Two Gentlemen of Verona (both Oregon Shakespeare Festival); Wild Swans (American Repertory Theatre); Trudy and Max in Love and Death of a Salesman (both South Coast Repertory); As You Like It and King of the Yees (both Baltimore Center Stage); Between Two Friends (Actors Theatre of Louisville); Othello (Boston Court); The Joy Luck Club (East West Players); The Merchant of Venice (LA Women’s Shakespeare) and 11 Septembre 2001; King Lear and Peach Blossom Fan (all Center for New Performance). Her Film work includes Larry Crowne and the up-coming Music. Television work includes What/If; The Blacklist; 9-1-1; Law & Order: True Crime; Homeland; Scandal; Shameless; Castle; Criminal Minds and American Horror Story. Celeste Den received her MFA from California Institute of the Arts and is a recipient of the TCG Fox Resident Actor Fellowship for Exceptional Merit, Round 12.

Michael Boyd’s recent directing work includes Tamburlaine (RSC); The Cherry Orchard (Bristol Old Vic/Royal Exchange); The Open House (Theatre Royal, Bath/Print Room, London); The Intelligent Homosexual’s Guide to Capitalism and Socialism With a Key to the Scriptures (Hampstead Theatre); Right Now (Traverse Theatre, Edinburgh/Theatre Royal, Bath/Bush); Orfeo (Royal Opera House/Roundhouse - Olivier Award nomination); Pelléas et Mélisande; Eugene Onegin and Don Giovanni (all Garsington Opera) and Tamburlaine (Off Broadway – winner of Obie, Drama Desk and Drama League Awards). His work has won many UK and international awards, including four Oliviers, and he was knighted for services to drama in 2012. Michael was the Artistic Director of the Royal Shakespeare Company from 2002-12 and the Artistic Director of the Tron Theatre in Glasgow from 1985-96.

Celeste Den is appearing with the permission of UK Equity, incorporating the Variety Artistes’ Federation, pursuant to an exchange programme between American Equity and UK Equity.