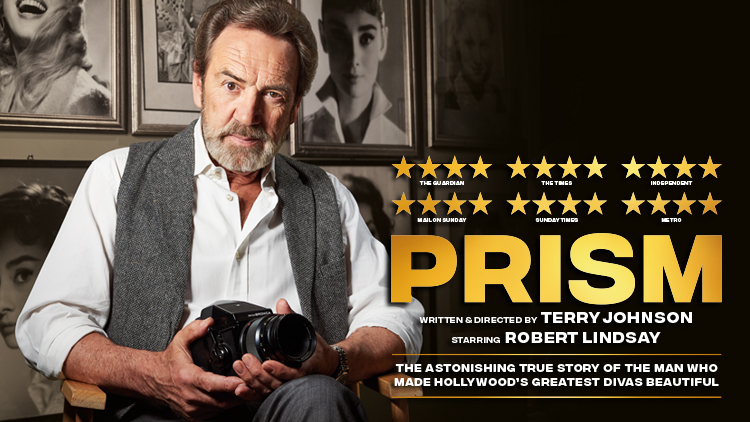 Following a sold-out run at Hampstead Theatre, Terry Johnson’s Prism returns to the stage as part of a national tour with Robert Lindsay reprising his role as the double Oscar-winning cinematic master Jack Cardiff.

Jack Cardiff has retired to the sleepy village of Denham, Buckinghamshire. His days of hard work - and play – on some of the most famous film sets in the world are now long behind him, as are his secret liaisons with some of the most famous women in the world... Surrounded by memorabilia from a lifetime of ‘painting with light’, the writing of an autobiography should be an easy matter - were it not that Jack would now rather live in the past than remember it…

“It’s wonderful that Prism is having this further life.  It was a massive sell-out hit at Hampstead in 2017, and Terry’s fascinating play and Robert Lindsay’s brilliant performance are still talked about by our audiences.  So we’re delighted that people all over the country will have the opportunity to see what caused the excitement and to enjoy this very special piece of theatre.”

Robert Lindsay plays Jack Cardiff. Robert Lindsay has experienced huge success on stage and screen since graduating from RADA in the early 70s. Robert has performed in television comedies and dramas, in Hollywood films, on Broadway and on the West End stage, with seasons at the RSC and the National Theatre. Theatre work includes In Praise of Love (Ustinov Studio, Theatre Royal Bath); Prism (Hampstead Theatre); Dirty Rotten Scoundrels (Savoy); Richard III (RSC); Power (National Theatre); Me and My Girl (London/New York); Becket and Cyrano de Bergerac (both Haymarket); The Entertainer (Old Vic) and Onassis (Chichester Festival Theatre/Novello). Films work includes Disney's Maleficent: Mistress of Evil; Grace of Monaco; Wimbledon; That’ll be the Day; Bert Rigby; Loser Takes All; Remember Me; Divorcing Jack; Fierce Creatures and Genghis Cohn. Television work includes Citizen Smith; GBH; Jake’s Progress; Hornblower; Oliver Twist; Galavant; Spy and My Family. All this work has given him an international reputation and garnered him many Awards on both sides of the Atlantic, including a BAFTA, a Royal Television Best Actor Award, a Variety Club Award, two Laurence Olivier Awards, a Fred Astaire Award and a Tony on Broadway.

Olivier and Tony Award-winner Terry Johnson’s critically acclaimed hit Prism transfers to a tour following its successful run at Hampstead starring Robert Lindsay. Other notable credits at Hampstead Theatre include his new version of Uncle Vanya, Hysteria starring Antony Sher as well as Race; Old Money; Seminar and The Memory of Water. Playwright credits include Dead Funny, Prism and Ken (all Hampstead Theatre); Insignificance; Cries from the Mammal House; Hysteria; Piano/Forte and Hitchcock Blonde (all Royal Court); The Graduate and Mrs Henderson Presents (both West End); Cleo, Camping, Emmanuelle and Dick and The London Cuckolds (both National Theatre). Other credits as Director include Oh What a Lovely War and Fings Ain’t What They Used T’Be (both Theatre Royal Stratford East; marking the 50th Anniversary of Joan Littlewood’s Theatre Workshop); Lost Land and The Libertine (both Steppenwolf Theatre, Chicago); Dumb Show (Royal Court). West End and Broadway directing credits include The Duck House; End of the Rainbow; The Prisoner of Second Avenue; The Rise and Fall of Little Voice; La Cage aux Folles; Rain Man; Whipping It Up; One Flew Over the Cuckoo’s Nest; Entertaining Mr Sloane and Elton John’s Glasses. His work for television includes Not Only But Always (Channel 4, which won five International Award nominations, Best Film at Banff and the Best Actor Bafta for Rhys Ifans); The Man Who Lost His Head (ITV); Cor, Blimey!  (ITV) and The Bite for the BBC and ABC Australia.  Nicholas Roeg’s film of Insignificance was the official British Entry at Cannes in 1985. His plays have won him the Olivier Award for Best Comedy in both 1994 and 1999, Playwright of the Year Award 1995, Critics’ Circle Best New Play Award 1995, The League of American Theatres and Producers Best Touring Play Awards 2001, plus two Evening Standard Theatre Awards, two Writers Guild Best Play Awards, Time Out Best Play Award, the Mayer-Whitworth Award and the John Whiting Award. As a director he has been the recipient of a dozen major theatre awards including the Tony Award for Best Director of a Musical 2010, Olivier Award for Best Musical Revival and Critics’ Circle Best Musical Award 2009 all for La Cage aux Folles.

The original production was generously supported by Lin and Ken Craig.