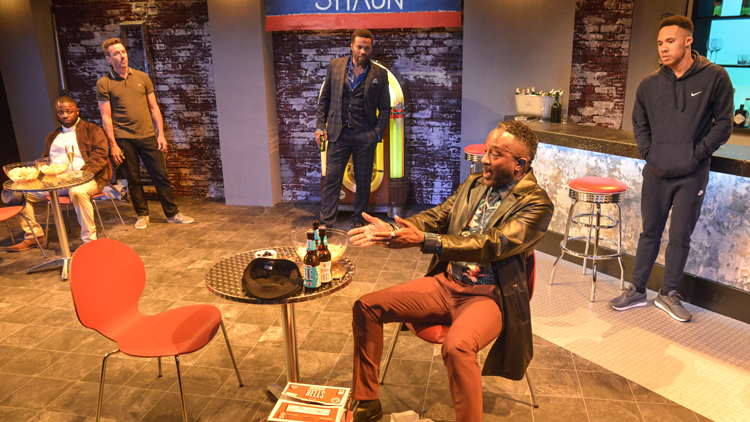 'The return to the stage... of Roy Williams’ hugely successful South London gang drama The Firm feels timely – though as the play itself demonstrates, the Big Smoke’s gang culture, with all its shifts and evolutions, has been a constant for decades. Like the recent Don McCullin exhibition at the Tate, with its iconic images of gangs in suits from Finsbury Park in the Fifties, it forces us to look beyond screaming headlines and think about the codes, complexity and camaraderie of crime culture.'

'If that makes it sound like a heavy evening, then think again. Part of the joy of Williams’ skill as a dramatist is the deftness with which he deploys his dialogue. Words whirl and spin with the edgy playfulness of any kid in a skateboard park. Just as in Sing Yer Heart Out For The Lads (his excoriating exploration of racism and football) and Sucker Punch (which investigates race and boxing culture), it is Williams’ ability to see humour and humanity amid the bleakness that gives his drama its power.'

'There is something inherently funny right from the start about the play’s premise, which sees four middle-aged gangsters – who by their own admission are getting a bit past it – holding a reunion around the prison release of a fifth, Shaun. Gus, played with worldly swagger by Ray Fearon, recently immortalised as Fleabag’s Hot Misogynist, is the only member of the gang to have escaped jail: yet his success, manifested in the swanky bar that he runs, feels increasingly shaky as the evening progresses.'

'Jay Simpson’s Leslie is the only white member of the gang. The moment he arrives at Gus’s bar, the testosterone-tipped banter kicks off.'

'Denis Lawson’s production moves with the fluidity of music – there’s no misjudgment in the rhythmic cut and thrust of the exchanges between these men behaving badly. With the entrance of George Eggay’s Trent... the sense of a joyfully dysfunctional family reunion intensifies.'

'Yet this is the point at which Williams ambushes us. The two final guests... are Clarence Smith’s superb Selwyn and Makir Ahmed’s teenage Fraser. With the presence of someone from a younger generation teetering on the edge of the lifestyle that has made the men street legends, they are forced to examine the worst and most out-of-control aspects of their legacy.'

'At a point when all aspects of gender and race are under the microscope, Williams reveals himself once more as one of the most compelling chroniclers of the complexities of masculinity in a rapidly changing world. Pitch-perfect performances from every member of the cast add to an evening that takes some of the most alarming aspects of our culture and allows us to experience both the laugh-out-loud comedy and intense heartbreak for everyone involved.'