HAMPSTEAD THEATRE, IN PARTNERSHIP WITH THE GUARDIAN, EXTENDS ITS FREE, DIGITAL STREAMING SERIES WITH TIGER COUNTRY AND #AIWW: THE ARREST OF AI WEIWEI 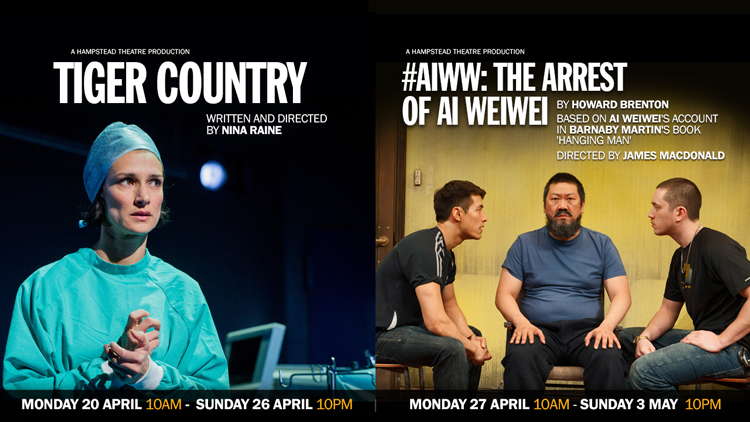 Hampstead Theatre is delighted to announce an extension of its free, digital streaming series in partnership with The Guardian. The live stream recordings of Nina Raine’s NHS inspired hit drama Tiger Country and Howard Brenton’s politically charged #AIWW: The Arrest of Ai Weiwei will be available to watch, on demand, on theguardian.com and hampsteadtheatre.com, as part of the theatre’s current #HampsteadTheatreAtHome series.

Tiger Country (2014) will be available to watch on demand from Monday 20 April 10am to Sunday 26 April 10pm (BST). Tiger Country, also directed by Raine, is an insight into the workings of the NHS and the people who keep it going. An action-packed and astute drama, it looks beyond the hospital corridors and into an extraordinary workplace, full of professionals under pressure, driven by ambition, compassion and humour.

Drawing the Line, also by Howard Brenton, is currently available to stream until Sunday 19 April, 10pm (BST). Directed by the late Howard Davies, the play tells the story of the chaotic partitioning of India in 1947 whilst celebrating the strength of humanity.

Hampstead Theatre closed its building following UK Government advice on Monday 16 March 2020. The #HampsteadTheatreAtHome series was launched to support audiences in isolation by sharing world class entertainment online for free. Recent productions streamed in the series include I and You by Lauren Gunderson on Instagram’s mobile video platform IGTV and, in partnership with The Guardian, Wild by Mike Bartlett and Wonderland by Beth Steel.

'I am delighted that we have been able to extend our #HampsteadTheatreAtHome series with The Guardian. It feels like there has never been a more apt time to share Tiger Country - Nina Raine meticulously studied the NHS and spent much time with its extraordinary employees who put their lives on the line, daily, to keep Britain safe. The whole nation is indebted to this workforce and should viewers want to support those working on the frontline in the fight against COVID-19, a link will be available on our website. #AIWW: The Arrest of Ai Weiwei also reminds us of the importance of freedom of speech. Many questions will be asked over the next few months and it’s in everyone’s interest that we continue to strive for a society that's built on truth and openness.

The reaction to our digital series so far has been tremendous and there is something deeply comforting about knowing that, despite these strange, uncertain times, people from across the world from America and Peru to Japan and Australia, want to tune in to watch theatre. Thank you again to the many artists involved for making this series possible and to The Guardian for helping us reach as many people as possible.'