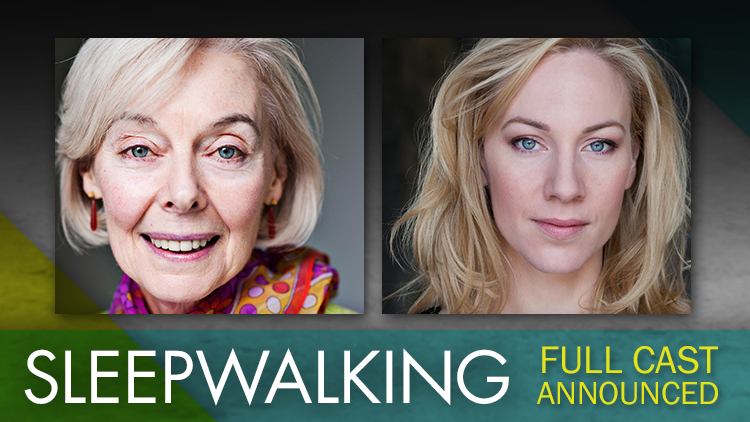 Hampstead Theatre has announced the full cast and creative team for James Tait Black prize-nominated writer Hannah Khalil’s dark new thriller Sleepwalking which will run from 26 March until 2 May 2020, marking her debut at the theatre.

Acclaimed stage and screen actors Eileen Nicholas and Jeany Spark will perform in this world premiere, directed by Audrey Sheffield who is also making her debut at Hampstead Theatre. Sheffield will be joined by designer Anna Reid, with lighting design by Ali Hunter and sound design by Julian Starr.

Eileen Nicholas is known for her role as Renton’s mother in the iconic 90s film Trainspotting and the more recent sequel T2 Trainspotting. Other screen credits include the film You Need Help and roles in the TV dramas, Broken and Midwinter of the Spirit. Recent theatre credits include Richard III with Headlong, Midsummer with National Theatre of Scotland, presented at Edinburgh International Festival and Mary Stuart at the Duke of York’s with the Almeida Theatre.

Nicholas will be joined by Jeany Spark, known to television audiences for her portrayal of Linda Wallander in the UK TV detective drama series, Wallander starring alongside Kenneth Branagh. Other screen credits include, Collateral, Born to Kill, Line of Duty 2 and Man Down. Theatre credits include Crooked Dances with the Royal Shakespeare Company, Skylight with Theatr Clwyd and Battleface with the Bush Theatre.

Life as a mother is full of challenges: there’s the house to be paid for, a high-pressure full-time job, and a daughter who has started having nightmares.  So it’s a relief when grandma steps in to help: dealing with the school run, preparing the daughter’s dinner, reading the bedtime story… everything suddenly becomes easier.  But what starts as desperately needed support gradually begins to feel pernicious. Best not to look too closely. Questioning things might lead to the end of this essential arrangement. And then the telephone starts to ring in the middle of the night…

Roxana Silbert, Artistic Director of Hampstead Theatre, said "I am delighted to be welcoming these brilliant new artists into our Downstairs space, dedicated to bringing audiences the most exciting voices in contemporary theatre. I can’t wait to see Hannah’s visceral play brought to life."

Hannah Khalil, Playwright of Sleepwalking said: “I am so excited to be making my debut at Hampstead's Downstairs space.  I’ve always loved the intimacy of this studio space and think it will be the perfect setting for Sleepwalking. I can’t wait to see it performed by these wonderful actresses whose work I’ve long admired.”

Audrey Sheffield, Director of Sleepwalking said: “When I first started working as a director, I came to see a lot of Hampstead Downstairs work and I always found it a really exciting and inspiring space.  I’m especially thrilled to now be making my directorial debut at the theatre and with Hannah’s fascinating, honest and deeply affecting new play.  I can’t wait to get into the rehearsal room with this incredible cast and whole team, to bring this production to life.”

Television work includes I Am Hannah; Collateral; Born to Kill; Man Down; Jericho; Wallander; The Interceptor; Da Vinci's Demons; Line of Duty 2; The Escape Artist; Vera; A Touch of Cloth; Death in Paradise; Law and Order UK; Shirley; Black Mirror: The National Anthem; Hattie; Sherlock; The Thick of It; Tess of the D'Urbervilles and Lewis: And the Moonbeams Kiss the Sea.

Recent theatre work includes Fix (Pleasance); Benched and The Quake Within (both LCDS at the Place); The Man who wanted to be a Penguin (Stuff and Nonsense); Mother of Him (Park200); For Services Rendered; The Play About my Dad and Woman before a Glass (all Jermyn Street); Cash Cow (Hampstead Downstairs); Rattlesnake; Don’t Forget the Birds and Sugar (all Open Clasp); Muckers (The Egg, Conde Duque); Soft Animals (Soho); Clear White Light (Live Theatre, Newcastle); Treemonisha and The Boatswain’s Mate (both Arcola); Gracie and The Biograph Girl (both Finborough); Out of Sorts and Isaac Came Home from the Mountain (both Theatre503); Tune-D In (The Place); The Acid Test (The Cockpit); Tenderly (New Wimbledon Studio); Katzenmusik (Royal Court) and Foreign Body (Women of the World Festival).

Ali was the Young Associate Lighting Designer for Matthew Bourne’s Romeo and Juliet in 2019.

Hannah is a writer of Palestinian-Irish heritage,.

Radio plays include The Unwelcome, Last of the Pearl Fishers and The Deportation Room.

Hannah was the Bush Theatre’s writer on attachment in 2016/7 as part of the first Project 2036 cohort. She was the recipient of the Arab British Centre’s Award for Culture in 2017. Her work is published in the UK, USA and Canada. She is currently under commission to Shakespeare’s Globe, Chichester Festival Theatre and the Central School of Speech and Drama.

Anna is a set and costume designer based in London and a graduate of Wimbledon College of Art.

Audrey is a recipient of MGCfutures Bursary, was selected as an OLD VIC 12 Director 2019 and Nominated for the Arts Foundation Award 2018.

Julian is a London based sound designer and composer specialising in creative sound design for theatre, musicals, events and installations around the world.

Sleepwalking plays Downstairs from 26 March - 2 May.