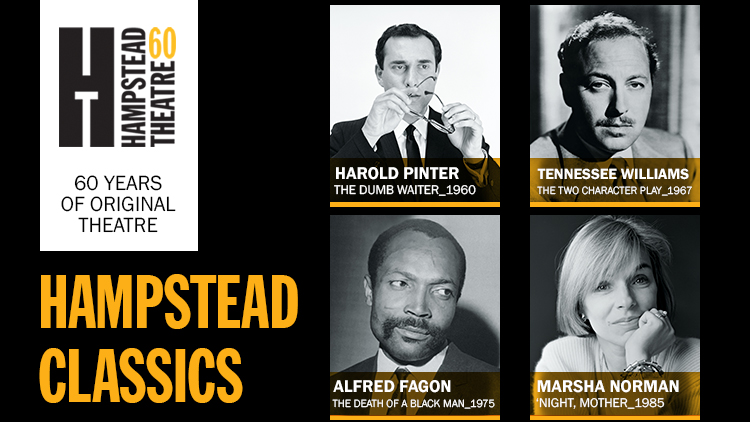 Roxana Silbert, Artistic Director of Hampstead Theatre, said: “Selecting only four plays from Hampstead Theatre’s massive backlist of world premieres was a real challenge and it really hit home just what a powerhouse this modest theatre is.  The range, diversity and singularity of the voices is extraordinary, as is how often they bring untold stories into the light.

Hampstead has always supported established writers and launched new ones by creating a space for artists to experiment and be heard.  May the next sixty years continue this wonderful tradition.”

“We’ve proved ourselves before now, haven’t we? We’ve always done our job. What’s he doing all this for? What’s the idea? What’s he playing these games for?”

Alice Hamilton is the co-Artistic Director of Up in Arms. Her directing credits include Blood Wedding (Salisbury Playhouse), Paradise and Every Day I Make Greatness Happen (both Hampstead Downstairs), The Weatherman (Park Theatre) and While We’re Here (Bush Theatre).

“The most influential, provocative and poetic dramatist of his generation”The Guardian

THE TWO CHARACTER PLAY
By Tennessee Williams
Directed by Sam Yates
24 April – 23 May 2020
Press night: Monday 4 May 2020 at 7pm
#HTTwoCharacter

“A doctor once told me that we were the bravest people he knew.  I said “Why, that’s absurd, my brother and I are terrified of our shadows.” And he said, “Yes, I know, and that’s why I admire your courage so much…”

Fellow actors, brother and sister Felice and Clare have been on tour too long: every town looks increasingly the same until they feel they could be anywhere.  Abandoned by the rest of the acting company, but faced with an audience expecting a performance, they must enact The Two Character Play.  But as their gripping ‘play within a play’ unfolds, the line between reality and illusion becomes increasingly unclear; as their characters reach out to the outside world, the actors’ isolation and uncertainty grows.

One of the foremost playwrights of the twentieth-century, Tennessee Williams spent over ten years writing The Two Character Play, an innovative, partly autobiographical work which he called ‘My most beautiful play since Streetcar, the very heart of my life’.  It returns to Hampstead Theatre for the first time in over fifty years with direction by Sam Yates, having received its World Premiere there in 1967.

“It seems to me his finest work for a decade, the most successful piece of sustained theatrical writing he has achieved since the first act of Sweet Bird of Youth.  It is good to see the poet laureate of lost grip recover his own”  Ronald Bryden – The Observer

It’s 1973, and the King’s Road is the epicentre of everything that’s cool and happening in the world.  Shakie, an 18-year old super-smart wheeler-dealer, is in his element hustling dodgy African furniture and is starting to make some serious money.  His best friend Stumpie is developing a grand scheme for a London festival of Black music which, with Shakie’s backing, is going to make them both super-rich.  So when Shakie’s older ex-lover Jackie arrives at his Chelsea flat on a visit, the trio toast the future in champagne.

Alfred Fagon, for whom the premier Theatre Award for Black British writers is named, was an actor, poet and playwright. The Death of a Black Man was premiered at Hampstead Theatre in 1975, the first work by a British Black writer to be presented there. 45 years on, the play, with its dark exploration of sexual politics and the post-colonial legacy, is still compelling viewing.  Dawn Walton will direct.

‘A difficult – because painful – exploration of West Indian identity in white capitalist society.’

‘Fagon’s writing is sharp, funny, unpretentious... (his) view of the black predicament is complex, thoughtful and compassionate’

“I am worried about you, but I’m going to do what I can before I go.  We’re not just going to sit around tonight.  I made a list of things.”

Thelma Cates and her daughter Jessie share the old family home out in the country; Jessie looks after her mother now she has begun to show her age.  This particularly quiet evening seems no different to any other – Jessie makes sure that Thelma has everything she needs, preparing food, folding the laundry, putting the bins out.  But a shattering revelation is in the air and, as this may prove to be the last evening they share, they have a lot to talk about…

Life as a mother is full of challenges: there’s the house to be paid for, a high-pressure full-time job, and a daughter who has started having nightmares.  So it’s a relief when grandma steps in to help: dealing with the school run, preparing the daughter’s dinner, reading the bedtime story… everything suddenly becomes easier.  But what starts as desperately needed support gradually begins to feel pernicious. Best not to look too closely. Questioning things might lead to the end of this essential arrangement. And then the telephone starts to ring in the middle of the night…

Hampstead Theatre presents the world premiere of Hannah Khalil’s Sleepwalking, a dark thriller that explores motherhood and the secrets that no mother could ever share with her child.

Audrey Sheffield makes her Hampstead Theatre directorial debut. Her directing credits include the forthcoming Twenty Twenty (Young Vic); The Effect and Apologia (both English Theatre, Frankfurt); The Dark Room (Theatre503 - Nominated for Best Director Offies 2017) and We Too Are Giants (Kiln).

Priority Booking for Hampstead Friends and The Downstairs Club is now open
Public Booking opens on Wednesday 5 February at 10.30am