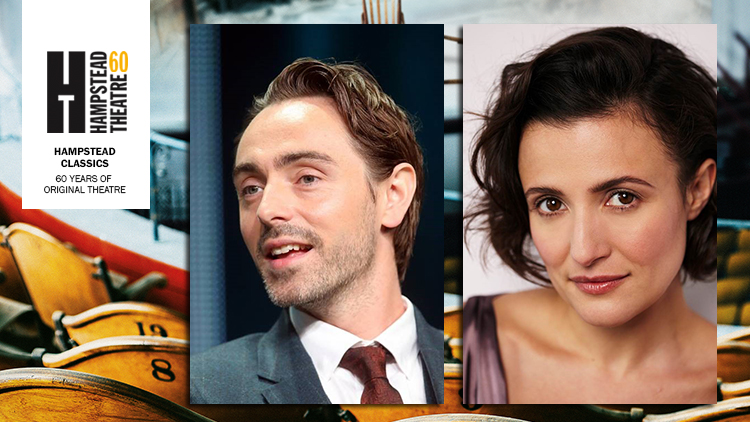 “A doctor once told me that we were the bravest people he knew.  I said “Why, that’s absurd, my brother and I are terrified of our shadows.” And he said, “Yes, I know, and that’s why I admire your courage so much…”

Hampstead Theatre has announced the cast and creative team for Tennessee Williams’ innovative, and partly autobiographical work, The Two Character Play.  Acclaimed stage and screen actors, David Dawson and Lyndsey Marshal, will perform in this unique two-hander which Williams called ‘My most beautiful play since Streetcar, the very heart of my life’.  The production, directed by award-winning theatre and film artist, Sam Yates, will run from 24 April until 23 May 2020.

David Dawson is an acclaimed stage and screen actor.  Recent television credits include playing Joseph Merrick (The Elephant Man) in Channel 4’s Year of the Rabbit (2019) and starring in BBC espionage drama The Secret Agent alongside Toby Jones, Vicky McClure and Stephen Graham.  Recent theatre credits include Fairview at the Young Vic and Casimir in Brian Friel's Aristocrats at Donmar Warehouse.

Dawson will be joined by Lyndsey Marshal, best known for her performance in the psychological film The Hours, alongside Meryl Streep, Nicole Kidman and Julianne Moore, and for her recurring roles in HBO's Rome (as Cleopatra) and BBC period legal drama Garrow's Law (as Lady Sarah Hill).  Recent screen credits include Mike Barnett’s ITV drama Trauma and the BBC’s New Year hit Dracula by Mark Gatiss and Steven Moffat.  She was nominated for an Olivier and Evening Standard Award for her role in Phyllida Lloyd’s production of Boston Marriage at the Donmar Warehouse.  Recent theatre credits include The Wild Duck; The Hypochondriac and Blood Wedding at the Almeida Theatre.

Tennessee Williams, one of the foremost playwrights of the twentieth-century, spent over ten years writing The Two Character Play.  It was originally directed by Hampstead Theatre’s founding Artistic Director James Roose Evans and received its world premiere at Hampstead in 1967.

Fellow actors, brother and sister Felice and Clare have been on tour too long: every town looks increasingly the same until they feel they could be anywhere… Abandoned by the rest of the acting company, but faced with an audience expecting a performance, they must enact The Two Character Play. But as their gripping ‘play within a play’ unfolds, the line between reality and illusion becomes increasingly unclear; as their characters reach out to the outside world, the actors’ isolation and uncertainty grows…

“It seems to me his finest work for a decade, the most successful piece of sustained theatrical writing he has achieved since the first act of Sweet Bird of Youth.  It is good to see the poet laureate of lost grip recover his own” The Observer, Ronald Bryden (reviewing the original production)

Sam Yates, Director of The Two Character Play said: “I am honoured to bring together for the first time two of our finest actors, Lyndsey Marshal and David Dawson, to play brother and sister in Tennessee Williams’ daring experiment in form. I’m particularly excited to return to Hampstead with designer Rosanna Vize and an ambitious creative team.”

Roxana Silbert, Artistic Director ofHampstead Theatre,said, “The Two Character Play is one of Hampstead Theatre’s gems.  Tennessee Williams was at the height of his career when he chose to offer the world premiere of this very personal play to the old theatre - a temporary pre-fab. This speaks volumes of Hampstead's standing as an artistic space under its founder James Roose Evans. I look forward to sharing this unique play, by one of the greatest writers of the twentieth century with our audiences, revived by a wonderful group of artists.”

The Two Character Play is part of Hampstead Classics, the theatre’s spring/summer programme to mark its 60th anniversary and celebrate its ambitious history as a new writing theatre.  Featuring four bold plays which all premiered at the theatre, the productions will be performed in chronological order and staged in the thrust, by a variety of distinctive British directors.

Harold Pinter’s The Dumb Waiter will open Hampstead Classics with Alice Hamilton directing this 60th anniversary production. Philip Jackson and Harry Lloyd will star in this timeless black comedy from 19 March until 18 April.  Sam Yates will make a highly anticipated return to Hampstead Theatre with Tennessee Williams’ The Two Character Play from 24 April until 23 May; founder and former Artistic Director of Eclipse Theatre Company Dawn Walton will direct Alfred Fagon’s remarkable tribute to the culture of London’s King’s Road in the 1970s, The Death of a Black Man running from 28 May until 27 June; and Roxana Silbert, Hampstead Theatre’s Artistic Director, will direct Marsha Norman’s ground-breaking ‘night, Mother running from 2 July until 1 August.

Television work includes Year of the Rabbit; The Last Kingdom; Ripper Street; The Secret Agent; Maigret Sets A Trap; Banished; The Duchess of Malfi; The Smoke; Peaky Blinders; The Borgias; The Hollow Crown: Henry IV Parts 1 and 2; Dancing on the Edge; Parade's End; The Mystery of Edwin Drood; Luther; Road to Coronation Street; Gracie; The Thick of It; Secret Diary of a Call Girl and Doc Marten.

Film work includes Trespass Against Us; The Forgotten; Hereafter; 1 2 3 4; Ding Dong; Man With a Movie Camera; Festival; Frozen; The Calcium Kid; The Gathering Storm and The Hours.

Television work includes Agatha and the Curse of Ishtar; Dracula; Hanna; Trauma; The League of Gentlemen; Silent Witness; From Darkness; Inside Number No.9; That Day We Sang; The Fuse; The Cricklewood Greats; A Short Stay in Switzerland; Being Human (2); Garrow's Law (1, 2 & 3); Marple; Kiss of Death; Green; Rome II; The Shadow in the North; Poirot: Cards on the Table; Rome; Born and Bred; The Young Visitors; Sons and Lovers and Midsomer Murders.

Television work includes Agatha and the Curse of Ishtar.

Rosanna trained as a designer at Bristol Old Vic Theatre School. In 2014, she became one of the Jerwood Young Designers and was resident assistant designer at the RSC from 2014-2015.

Dan is a London based Sound Designer and Dramaturg who trained at the Central School of Speech and Drama.

Akhila Krishnan is an award-winning Projection Designer and Creative Director for moving image and VR.  She trained at the Royal College of Art and the National Institute of Design in India.

From 2012 to 2018 she worked for 59 Productions where her credits include An American in Paris (winner of Tony and Olivier awards); The Metropolitan Opera’s 50th Anniversary Gala and Grenfell: Our Home (Best VR Documentary Award at the Raindance Festival 2018).

The Two Character Play plays on the Main Stage from 24 April - 23 May.