I AND YOU, STARRING MAISI... 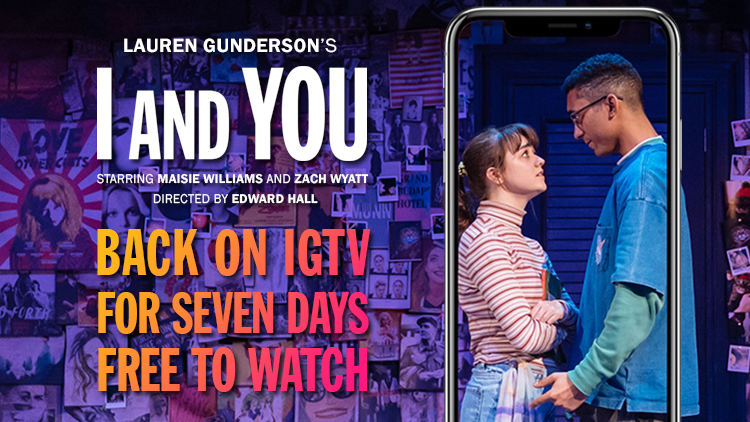 HAMPSTEAD THEATRE TO STREAM HIT PRODUCTION OF I AND YOU, STARRING MAISIE WILLIAMS, FOR FREE FROM MONDAY 23 – SUNDAY 29 MARCH

Hampstead Theatre and the entire company of I and You, announce the re-release of hit production I and You by Lauren Gunderson on Instagram for free.

For a week, Monday 23 March 10am – Sunday 29 March 10pm GMT, anyone with an Instagram account will be able to watch the full production by following @hampstead_theatre or @lalatellsastory (Lauren Gunderson). The play will be available to view on demand on their IGTV channels.

I and You, starring Maisie Williams (Game of Thrones) and Zach Wyatt, is a witty and uplifting portrayal of friendship, youth and living life to the full written by one of America’s most produced playwrights. It was a box office and critical success at Hampstead Theatre where it received its UK debut in 2018. The Hampstead production was specially performed, filmed and edited for Instagram’s mobile video platform IGTV, during its run at the theatre, and was previously broadcast for free from 30 November to 3 December 2018.

The theatre’s building is closed following UK Government advice on Monday 16 March 2020 and currently looking at alternative ways of continuing to engage with its industry and audiences.

Roxana Silbert, Artistic Director of Hampstead Theatre said: “Like everyone in the theatre community right now, and indeed across the globe, we at Hampstead Theatre are watching these unprecedented events unfold and wondering what we can do to help.

We are an industry that seeks to bring people together and tell stories that resonate. I hope this particularly tender and funny story offers some much-needed entertainment and connection right now – thank you to Lauren Gunderson, Edward Hall, Maisie Williams, Zach Wyatt and the entire company in allowing us to share your beautiful work.”

I and You is now playing on IGTV until Sunday 29 March 10pm GMT.