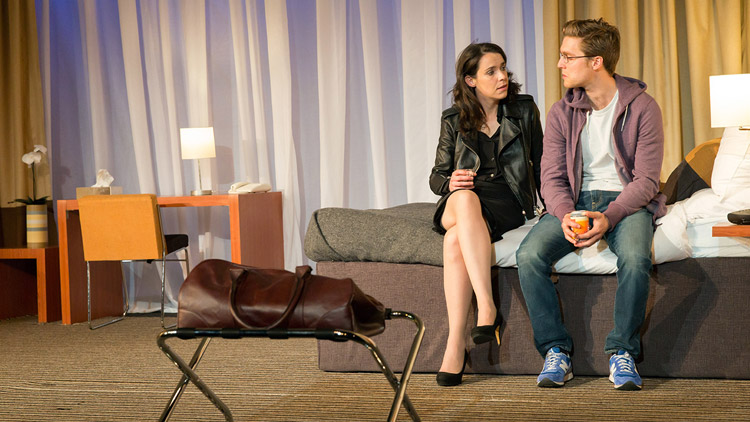 'Hampstead Theatre has delved into its digital archive. In partnership with The Guardian the theatre will stream a series of past productions completely free of charge. First up is Mike Bartlett's Wild, which premiered back in 2016. The play is available for just one week and will be followed by Beth Steel's Wonderland and then Howard Brenton's Drawing the Line.'

'A basic hotel room, wonderfully designed by Miriam Buether, is where we find Andrew (Jack Farthing). The American is a wanted man having leaked highly classified government information and the ramifications of his actions are just hitting home. With him is a mysterious woman, played by an often hilarious and always ambiguous Caoilfhionn Dunne. Her organization has helped Andrew seek asylum in Moscow but her assistance comes at a price. Is she friend or foe?'

'We are perhaps left with more questions than answers but lingering thoughts and ideas are of course a sign of theatre at its most engaging and provocative... James Macdonald's controlled direction makes for a tight production that sustains our interest throughout.'

'The lack of an interval allows the pace to simmer towards boiling point. The claustrophobic set embellishes the sense of isolation that's transmitted through both Bartlett's writing and Farthing's completely convincing portrayal. Dunne is given some great material to work with and makes the character her own, showcasing excellent comic timing in a carefully considered and well balanced performance. It's enjoyable to see her play off Farthing and she invites many laughs.'

'John MacKay completes the cast as Andrew's second enigmatic visitor. Like Dunne his character is somewhat Pinteresque with the actor emanating a menacing persona. We never know who to trust and nothing is quite as it seems.'

'Bartlett is an esteemed television writer but he understands the power of theatre and the fact that on the stage simplicity is often the strongest means of presenting complex ideas. Wild utilises the medium throughout but it's the unexpected and brilliantly executed ending that both hammers home Bartlett's arguments while reminding us of theatre's wonderful capabilities. An engrossing slow-burn, it's worthy of a watch for first timers and those who want to revisit and unpick this intelligent and unnerving thriller.'

Wild streams on the Hampstead Theatre and Guardian websites until Sunday 5 April.