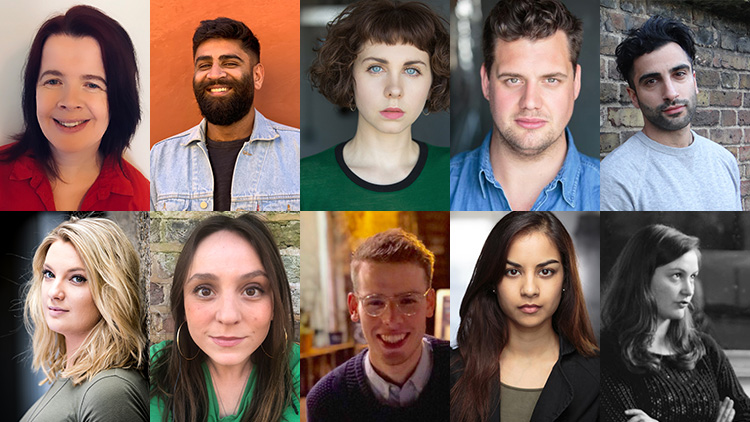 Joining INSPIRE is by invitation only. However if you would like to introduce us to your work, please submit a script via our Open Script Submission and it will be read by our Literary Department

The INSPIRE 2020 programme has been adapted to go online.

Roy Williams, Mentor of INSPIRE said: “When it comes to INSPIRE, the clue is in the title.  No one can teach anyone how to write, but we can help to inspire them to find their creative voices.  This year's group of ten, the largest ever are the most diverse, group we have ever had, in terms of age, sex and ethnicity.  They are really hard working with their excellent plays, all reflecting somehow with great subtlety, the challenging times we are all facing right now.  A lovely group. Super talented. The future of British theatre is in safe hands.”

Georgina Burns
Georgina's plays have been performed at Hampstead Theatre, Theatre503, Riverside Studios, the Arcola, New Diorama and the Stephen Joseph Theatre. She was mentored by the playwright Nell Leyshon as part of the Jerwood/Arvon mentoring scheme and took the Advances in Scriptwriting Course with Stephen Jeffreys at RADA. After graduating with a degree in Politics she worked in publishing and the third sector. She later qualified as a psychotherapist and has worked in the NHS for over ten years.

maatin
maatin is a writer and dramaturg from north London. His first short play, Meatballs, was selected as part of The Mono Box’s PLAYSTART 2019, performed at the Hampstead Theatre, and published by Oberon Books. His television sitcom pilot, Unholy, was longlisted for the BBC Comedy Script Room 2020. maatin graduated from Royal Central School of Speech and Drama in September 2020 with an MFA in Writing for Stage and Broadcast Media.

Kit Sinclair
Kit Sinclair is an awarding winning writer and performer. She has created work with the Soho Theatre Writer’s Lab, was previously longlisted for the Papatango award, and her solo show Awakening was listed as a Lyn Gardener top pick during its run at the Edinburgh Fringe Festival. In 2018, Kit wrote and starred in her debut short film Aeroplanes, which was screened internationally and for which she was nominated Best Actor at Underwire Festival. As an actor, she has starred in television shows such as Casualty, EastEnders, and Lewis, on stages around the UK, and in a number of adverts internationally.

Kris Phillips
Kristian Phillips is a Writer and Actor from Port Talbot, South Wales. He graduated from The Bristol Old Vic Theatre School in 2009 and began writing in 2017. His first piece, A NORMAL, was selected to be performed at the Chippy Lane Scratch Night at Theatre 503. Since then he's written a short play for Reading Between the Lines - 24 Hour Plays and last year he completed his first full length play DRIFT, after extensive R&D's at both Birmingham REP and Theatr Clwyd. He has recently been accepted onto the Theatr Clwyd's Writer in Residence Scheme. Kristian can't wait to be part of INSPIRE at Hampstead.

Tariq Jordan
Tariq is a writer, actor, and practitioner of Russian-Jewish and Iraqi-Muslim heritage. He graduated from the Royal Central School of Speech and Drama in 2007 and has worked extensively as an actor for stage and screen since. His debut play Ali and Dahlia, a Palestinian-Israeli love story set against the backdrop of the construction of the West Bank Wall, premiered at the Pleasance Theatre Islington in spring 2019 and was directed by Kerry Michael MBE. The play was nominated for Best Play in the 2020 Writers’ Guild of Great Britain Awards.

Isla van Tricht
Isla van Tricht is a playwright, librettist and videogame writer. Her work has been produced in London, Edinburgh, across the UK and off-Broadway in New York City. Her plays have been long-listed for awards including The Bruntwood Prize, The Papatango Playwriting Award & The Verity Bargate Award. She is currently under commission to create two new plays for young people as well as writing for a new videogame. Her recent work includes a UK tour of Becoming Electra: A Queer Mitzvah. Her work often explores dark/controversial topics with a comic edge - so she has a pretty colourful Google search history.

Ollie George Clark
Ollie is a writer for stage and screen. His work has led to him receiving numerous award nominations including the BAFTA Rocliffe and Liverpool Hope Playwriting Prize. His past credits include Cuttings at Theatre503 and Hope Theatre, for which he received a nomination for the Liverpool Hope Playwriting Prize; The Strictly Curse at Southwark Playhouse; Warm and Chewy at Old Red Lion and Chiswick Playhouse; Coconuts at Lyric Hammersmith; What Worries Me at the Bloomsbury Theatre; Those We Exile at Almeida Theatre and Hold for Three Seconds at the Edinburgh Fringe. Ollie is currently in the process of working with Jake Orr Productions on a new show and was recently commissioned to write for Feel More at the Lion and Unicorn.

Subika Anwar-Khan
Subika is a Writer and Actor from Northampton and studied Creative Writing. She was a part of The Royal Court’s writers group and has written scripts with various theatre companies including Paines Plough, Camden People’s Theatre, Curve Theatre, Kali Theatre, Royal and Derngate, New Perspectives, Tamasha theatre, The Belgrade Theatre, Birmingham Rep, The Roundhouse, Nabokov theatre and Drywrite. Her plays include Plays include Stateless (Tristan Bates Theatre) and Princess Suffragette (The Vault Festival) and Divided (Camden Peoples Theatre) which also received arts council funding. Subika has appeared in plays at Theatre503, The Gate theatre, The National Theatre, the Royal and Derngate and the Leicester Curve. She has also appeared for shows on the BBC, Nickelodeon and was in her first feature film which was part of the London Film Festival 2020 and received a Cannes Award nomination.

Lucy Foster
Lucy is a Writer-Director based in London, and the Co-Artistic Director of Snapper Theatre. She studied Creative Writing at the University of Warwick and was part of the Royal Court Introduction to Playwriting Group. Most recently, she won the Alpine Fellowship 2019 with a new play centred on gender identity; she's a finalist for Flickers of the Future 2020, a film initiative launched by Global Action Plan; and she has been optioned by Binocular Productions to develop an original TV series. She is an Associate Producer for Bare Essentials (Encompass Productions), co-created new writing evening Short(s)wave and was Offie-Nominated as Best Director for THE KNIGHT FROM NOWHERE / THE BELLS (Park Theatre, 2015). Lucy wrote LOBSTER, Snapper Theatre’s debut production (Theatre503, 2018), and directed THOMAS (VAULT Festival, 2019) and HEAR ME OUT (Calm Down, Dear Festival, Camden People's Theatre, 2019).