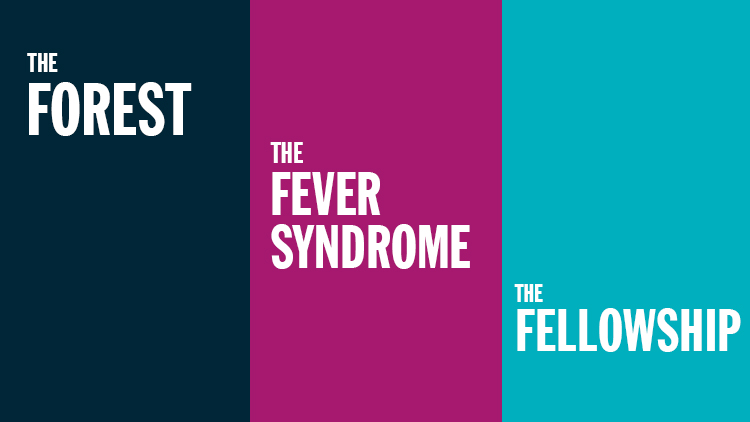 The Forest by Florian Zeller, translated by Christopher Hampton, with direction by Jonathan Kent, will run from 4 February until 12 March.

The Fever Syndrome by Alexis Zegerman, directed by the Hampstead’s Artistic Director, Roxana Silbert, will run from 18 March until 23 April.

The Fellowship by Roy Williams, directed by Paulette Randall, will run from 17 June until 23 July.

'" am delighted to be announcing three world premieres today for 2022. Since its inception, Hampstead has been a home for dramatists and a centre for presenting new plays in front of audiences for the first time. I’m very excited to be welcoming some incredible artists to our Main Stage. Each have a rich and unique story to share about family, love and relationships. I’m especially delighted to be welcoming Roy and Alexis back to Hampstead, and deeply honoured that Florian has chosen Hampstead for his new play – the first to receive its world premiere outside of France.

It will have been two years since we offered a new play on the Main Stage and it is a profound joy to be able to do so for our amazing audiences who have remained so loyal during difficult times."

The Forest is an uncompromising and mysterious new play by the multi-award-winning French novelist, playwright, theatre director, screenwriter, and film director, Florian Zeller. It is translated by his long-time collaborator, Christopher Hampton and directed by Jonathan Kent, who re-unites with Zeller after his production of The Height of the Storm, which was critically acclaimed in London (2018) and on Broadway (2019).

"He can’t help himself and he plunges into the forest…until the moment it dawns on him: night has fallen and he is completely lost."

At this turning-point of his life, Pierre finds himself tormented by the conflicting demands of family, career and sexual desire. His struggle to resolve this crisis, without fracturing his marriage or compromising his moral code, is explored in unsettling ways.

"I’m telling you a story, if that’s all right by you. Apparently, you’ve no objection to telling stories yourself. Am I right?"

Florian Zeller’s play The Father (Wyndham’s) has the status of a modern classic and the screen adaptation won the 2021 Academy Award for Zeller and Christopher Hampton. His recent plays in London include The Son (Duke of York’s), The Height of the Storm (Wyndham’s), The Mother (Kiln Theatre), The Truth (Wyndham’s) and The Lie (Menier Chocolate Factory).

Multiple-award winning playwright and screenwriter Christopher Hampton won an Academy Award for his screen adaptation of his play Les Liaisons Dangereuses (as Dangerous Liaisons). He was also nominated for adapting Ian McEwan’s novel Atonement in 2007. Hampton has previously translated Zeller’s The Father, The Mother and The Truth.

The full cast and creative team of The Forest will be announced in due course.

"You have to ignore the dissenters… You have to be a god, or the heart transplant would never have happened."

Dr Richard Myers, the great IVF innovator, is virtually a secular saint because of the thousands of babies he has created throughout his career.  Now, his family gather to see him receive a lifetime achievement award.

This fractious group are more accustomed to debate than empathy, so it’s not long before the family home in the Upper West Side of Manhattan is once again alive with dispute: conflicting Thanksgiving memories, polarised opinions on investment banking, and how best to care for their ailing father.  And crucially, who will inherit Richard’s wealth and Richard’s prestigious science institution?

Alexis Zegerman was Pearson Writer-in-Residence at Hampstead in 2007, where her play Lucky Seven premiered in 2008. A Susan Smith Blackburn Prize finalist for The Steingolds (2011),her other plays include I Ran The World (2003), Killing Brando (2004) and Holy Sh!t (2018). Zegerman also wrote the screenplay for The Honeymoon Suite.

The full cast and creative team of The Fever Syndrome will be announced in due course.

"Where’s the glory Mum? Where’s that perfect world for us, your kids?"

Children of the Windrush generation, sisters Dawn and Marcia Adams grew up in 1980s London and were activists on the front line against the multiple injustices of that time.  Decades on, they find they have little in common beyond family... Dawn struggles to care for their dying mother, whilst her one surviving son is drifting away from her.  Meanwhile, high-flying lawyer Marcia’s affair with a married politician might be about to explode and destroy her career. Can the Adams sisters navigate the turmoil that lies ahead, leave the past behind, and seize the future with the bond between them still intact?

Roy Williams OBE is one of the UK’s leading dramatists. His plays include The Firm, Wildefire (Hampstead Theatre), Sucker Punch (Royal Court) and Death of England and Sing Yer Heart Out For The Lads (National Theatre). In 2020, his play Death of England: Delroy reopened the National Theatre and he received both a BAFTA Nomination (Best Short Form Drama) and an RTS nomination (Best Writer, Drama) for his contribution to BBC4’s Soon Gone, A Windrush Chronicle. Williams is also mentor of the theatre’s year-long writers’ programme Inspire.

The full cast and creative team of The Fellowship will be announced in due course.

The world premiere of little scratch, by Rebecca Watson, in an adaptation by Miriam Battye, directed by Katie Mitchell, is currently running at Hampstead Theatre Downstairs until 11 December. little scratch is a fearless and exhilarating account of a woman’s consciousness over the course of 24 hours, with sound score by Melanie Wilson, featuring Morónkẹ́ Akinọlá, Eleanor Henderson, Eve Ponsonby and Ragevan Vasan.