5 Stars from The Daily Mail for Chariots of Fire 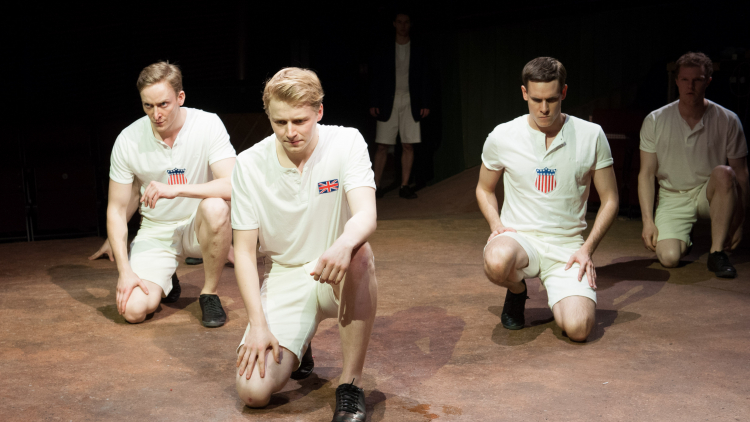 Heading to the Hampstead Theatre for the stage version of Chariots of Fire, I tried to imagine how they would do all those sprinting scenes from the celebrated film.

How would they capture the spirit of the 1924 Olympic Games when the British runners included Harold Abrahams and Eric Liddell, the Scots churchgoer whose religious observance of Sundays prevented him from running in the 100 metres?
Surely the actors would not leg it round the theatre, I told myself. Surely we would have a surfeit of slow-motion stuff and flickering black and white film.

Pah! What did I know? They do indeed run – sprint, even, working up big sweats. There is no lazy resorting to antique footage. This show is both a physical and creative work-out. The Hampstead has been reconfigured to allow not only a revolve in the middle of the acting area but also a running track which bisects the stalls.

Director Edward Hall has plainly had a ball, not only with his floorplan but also with a large, well-drilled, multi-tasking cast who show that Equity could probably field a decent running team. At first the action is bewildering. I almost felt a stitch coming on, there was so much speed and noise. If this stirring production has a fault, it may be that the theatricalities are overdone. The seats vibrate to the thump of runners’ gym shoes. There is so much to-ing and fro-ing – steam from a train, Cambridge University fresher jollities – that it is a relief when things hush for a moment and we hear a grandfather clock strike in the Liddell family house. Time to catch your breath. Once the story of the Abrahams-Liddell rivalry is established, the action becomes only thrilling. Abrahams is fuelled by anger at being excluded on account of his Jewishness. Liddell is powered by his faith. Abrahams (James McArdle) is ruthless, obsessed, methodical. Liddell (Jack Lowden) is amicable, stubborn, another loner.

Both actors are splendid. First-class support comes from, among others, Nicholas Woodeson as a running coach, Savannah Stevenson as Abrahams’ operatic girlfriend, Simon Williams as a Cambridge college master and Simon Slater in numerous roles, including that of interval bandmaster.

A fast outsider’s determination is honoured. So is a good man’s burning loyalty to God. Gold medals all round.