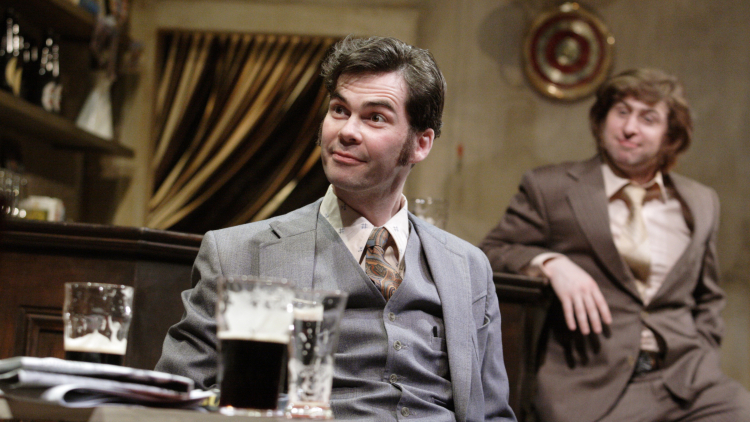 Getting under the skin of emigration

In his homecoming speech, the newly elected President Michael D Higgins told a jubilant crowd in Eyre Square that Galway “is the place to where I return and where I will always return, because it is of Galway that I am.” The throng roared in approval. Here he was, their man, triumphant, well-travelled and worldly wise but, above all, imbued with a deep appreciation of home.

Galwegians feel a similar sense of pride and proprietorship over Druid, the theatre company which, over the course of almost four decades, has achieved international renown while remaining an integral part of its native city’s cultural fabric.

The company’s latest production sees it staging three Tom Murphy plays in a cycle, something it has previously done with the work of John Millington Synge and Martin McDonagh. DruidMurphy launches this week in London but has been previewing in Galway, where, perhaps unsurprisingly, the reception has been positive.

The production of the Tuam playwright’s work maintains the company’s firm connection with the west o fIreland.

Set up in 1975 by Hynes and two other University College Galway graduates – Marie Mullen and Mick Lally – it made, from the beginning, “a very conscious decision that the company was there because we felt that life as lived in the west of Ireland, for us as young individuals, was different from life lived elsewhere.

“I think that has been a defining force of the company and despite the fact that the company has, I suppose, reinvented itself about five different times in the last almost 40 years, I think that still continues to be at the heart of what we do.”

The three plays in the DruidMurphy production, Conversations on a Homecoming, A Whistle in the Dark, and Famine, address familiar themes from the modern Irish canon: a leadership deficit and social stagnation but the over-riding concern is emigration.

“A desire to get under the skin of emigration, above all, binds the plays,” Hynes has said. “To give flesh to the conundrums of leaving for new lands, adjusting to new places, returning home, or deciding to stay when so many have left.

“On no account should these plays be called a trilogy. Written as much as 25 years apart, they reflect a writer moved by different concerns, or different aspects, of a central concern.”

Mass emigration has been visited upon Ireland in waves since the Famine first drove so many people off the island.

One hundred years later the economic and cultural inactivity of the 1950s saw a huge influx of Irish immigrants to Britain. Later, as Ireland experienced something of a boom the outflow tapered off only to become a deluge when the economy collapsed in the 1980s. Now, almost predictably, Ireland is once again in the throes of widespread emigration.

Conversations on a Homecoming and A Whistle in the Dark will be bitterly familiar to those who have been away from Ireland for years. The former addresses the unnerving realisation – felt by the returning emigrant – that the place they left has changed irrevocably in their absence.

Michael, returned home after 10 years in New York, joins his old friends for a drinking session in a rural pub. He is looking to revisit the heady optimism of the years before he went away, but as the night goes on he realises that the youthful ambition of those he left behind has, in the intervening years, been overcome by a disenchanted acceptance of mediocrity.

A Whistle in the Dark, meanwhile, is set in Coventry where Michael – a different Michael – has managed to integrate into English society. But the transition is tortured by his three brothers, to whom he is playing host. They flout the law as a matter of principle and claim honour through street-fighting. When his father and youngest brother arrive over from Ireland, Michael finds himself being pulled, unwillingly, into the milieu from which he tried to escape.

“I think those are the questions that go through all his plays whether they be notionally set in Famine Ireland, or in 1960s Coventry, or in 1970s Tuam.”

She adds that the extraordinary thing about working on the plays is that they feel like they could have been written yesterday. “I suppose the reason for that, in my mind, is the greatness of Tom as a writer but also because these important questions have never really been answered and I think that we’re struggling with the consequences of that now.”

She dismisses the notion that modern technology has taken most of the pain out of emigration. Skype and cheap flights don’t alter the essential experience, she says.

“I think it ameliorates it, it probably makes it more bearable, but there’s still a fundamental dislocation. There’s still something wrong with the country that has to export so many of its people.”

To read the full article on The Irish World click here