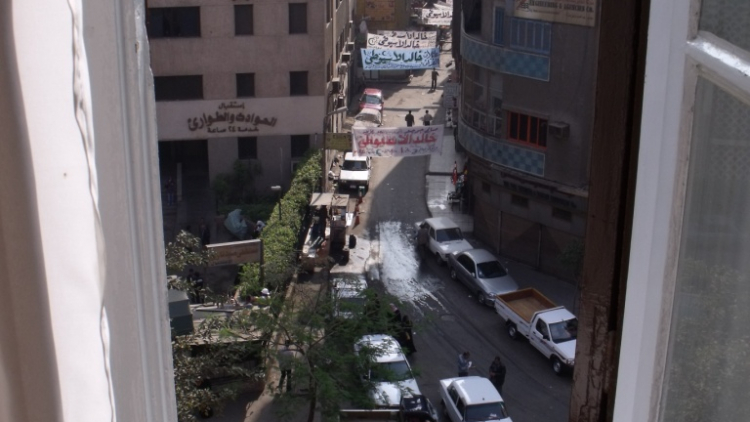 Steve Waters writes about the research trips he undertook for Ignorance/Jahiliyyah to Colorado and Egypt, accompanied by photographs he took on his journeys.

1. Writing a play is always a journey. Writing Ignorance/Jahiliyyah has been more literally a journey; to be more precise, a search. It’s involved travel to two continents, strange nights in strange towns and extraordinary conversations. The object of the search is an Egyptian writer, Sayyid Qutb (1906-1966), a major novelist and critic and journalist from the inter-war period who by the 1950s had re-framed himself as one of the great modern Islamist thinkers. For some his writings lead directly to the ruling Freedom and Justice Party in Egypt now, the political wing of the Muslim Brotherhood; for others, he is the martyr who inspired Al-Qaeda. Whatever his descendants made of him, I’m haunted by his time in America from 1948-1949. Maybe there’s a play in this.

2. The first destination is Greeley, a small town in Colorado, largely famous for the smell of its abattoirs. I arrive at Denver airport on a dark December night – ‘snowmaggedon’ has descended and it’s minus eight. I have a cold room in a student hall of residence on the campus of the University of North Colorado. During breakfast, students in sweats smile indulgently at the strange middle-aged Brit eating buttermilk pancake, watching Obama get roasted on Fox. Later in the James Michener library as I leaf through year-books from 1949, the semester Qutb haunted this campus, the librarians contemplate going home early as more snow falls. When I set out into the night to walk to town my nose-hairs tingle and I get lost in the backstreets where he walked, staring at the lawns glowing white in the dark.

3. I meet Peggy Waldo Ford at the Greeley city museum which before 9/11 was dedicated largely to the founding of town and thereafter the first stop for journalists trying to tell the tale of how America fostered the birth of Al-Qaeda. Peggy has a routine; out come the ‘Greeley Gazettes’ showing what movies were playing when Qutb was in town, out come the ironies of a man finding this paragon of Middle-America a harbinger of the emptiness of modern life. She buys me lunch in a Mexican restaurant, drives me round the cold, low-lying houses on the wrong side of the tracks pointing out the odd meth-den. The Cache-le-Poudre river is full of great floes of ice; a mournful train dumps grain at the endless miles of feedlots where cows wait to become beef. Peggy and her new partner Rob, an attorney, take me to supper in Greeley country-club where I am introduced as a ‘British playwright from Cambridge’. The talk is all of a production of ‘Twelfth Night’ at the University theatre – ‘The Little Theatre of the Rockies’.

4. All week the clouds obscure the front range of the mountains. Then on Friday they lift and the flat, strip-developed plain gains an unimaginable grandeur. Bob, driving me to Denver (there is no public transport here) remembers his dad taking him hunting, and how the hunting never interested him only the animals. I have not found Qutb but I have found the world he came into, and also felt some of the strangeness he might have felt on being there.

5. London: I am waiting to meet an academic at LSE, standing in the corridor outside his room, chatting to a keen, bright-eyed American grad about to have a supervision about US foreign policy in Syria. Or I’m having lunch with the émigré Libyan novelist Hisham Matar at a café in Holland Park; he knows little about Qutb but observes, ‘exile does strange things to people’.

6. Cairo, a year before the up-rising. I am in the Victoria Hotel on El Gomhoria Street. Shaw stayed here, T.E.Lawrence stayed here. Behind shutters at dawn, the guttural throat-clearing of the first muezzin begins – across the city, male wails set each other off, a system of lament filling the dreams of tens of million Egyptians, Copts and Muslims and secularists alike. It’s magical and faintly menacing; it seems there to drown out the other constant noises, the incessant sound of traffic, the dogs setting each other off, the sounds of traders, music from transistors swinging in taxis, televisions set to Al-Jazeera.

7. I meet Nehaid in a chic café in Mohandiseen. She is an elegant, unveiled secular survivor of the Egypt of Nasser. When I mention the subject of my play she looks pained: why focus on this man? She smokes, mentioning friends who suddenly acquire the veil or blisters on their forehead signalling their passion for prayer. She mentions the clinic which treated her for cancer, the call to prayer playing amplified as if in reproach. She says sometimes people take her for a Coptic Christian simply because she does not wear a veil. And I meet Heather who teaches in the American University of Cairo in the lush gardens of the Marriot hotel on the island of Zamalek. She talks about the passion, the integrity of Qutb; I note a hoopoe’s fiery oddity in the manicured hose-pipe fed grass.

8. I am driven around by Moussa or Moses, sitting without a seat-belt in the front seat; I mention the Muslim Brotherhood, the ‘Ikhwan’, and he waves his hand around in a kind of curt anger. I am driven out to the stylish suburb of Heliopolis by a man in white cotton, a fine frizz of beard, devotional beads hanging from his rear-view mirror; a distorted endless text of some sort, (poetry, sermon?) plays from his tape-deck. He does not look at me once. He accepts my money with a kind of anger, then drops me in the middle of nowhere.

9. I travel out to Helwan, the suburb where Qutb lived before Nasser had him arrested. I accidentally alight onto the all-female carriage; it’s a crush of veiled woman in hijab and niqab and burqa. This is a major faux-pas so I step out and into a similar press of men who are no more happy to see me. Boys gather around and smile and take the piss out of me. I gaze out at the suburbs and glimpse what I think is the prison where Qutb was held for a decade, savaged by dogs, finally to be hung there in 1966. Helwan has fallen on hard times – the fountain’s dry at the station; the park is full of beggars with varying levels of disability. I walk round aimlessly no longer sure what I am looking for.