Race: An interview with T...

Race: An interview with Terry Johnson 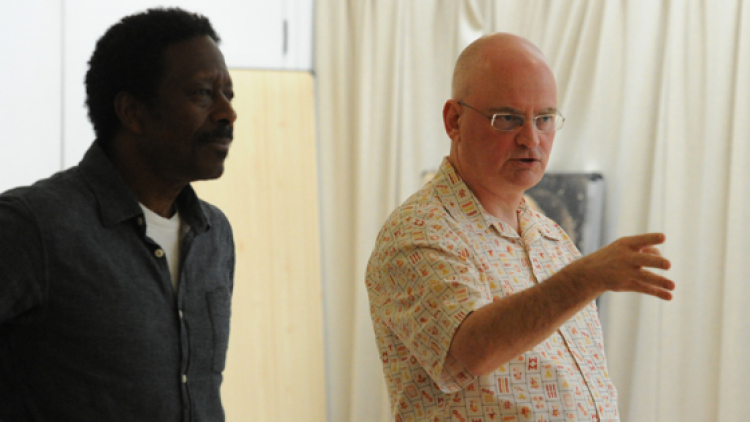 Multi-award winning director, Terry Johnson, who recently staged the sell-out Old Money – Hampstead’s most successful show at the box office to date – describes Race as ‘a huge act of provocation’. Catching up with him, as the cast prepare to enter their last week of rehearsals in the studio space before going onstage, we bat around various attempts to define Race as a play, but agree that this is tricky. Perhaps call it a detective story, powered not by traditional evidence, but by the ‘clues’ of prejudice and assumption? Or perhaps, it’s a courtroom drama set outside of the courtroom, casting the audience as jury?

The essence of the story, set in the USA, is that a rich, powerful white man, Charles, stands accused of raping a young, black woman. The central premise of the play appears to argue that, fifty years ago in this type of case, the white man would be found innocent. However fifty years on, because of that history, the white man will automatically be found guilty. In fact, it is the accused’s putative defence team who claims that no jury could find Charles innocent, because white people would fear being called racist; and black people would fear the charge of treason.

Johnson is quick to point out, however, that the apparent premise itself may be challenged, because the play is all about shades of truth and perception. As he says, ‘This play has four characters and four viewpoints. And that’s part of its dramatic skill… you can be totally convinced by each person’s track in this.’ And while Johnson and the cast have a strong view about what actually happened in that hotel room between the white man and the black woman, the play will only be finally completed ‘in the bar, in the car, on the way home’ by those who view it. Johnson loves the play because ‘it can’t exist without an audience judging it, and judging every member of it’.

Dramatist and director, Johnson, who has authored works such as Dead Funny, Hysteria and Insignificance, puts Race right up there at the top of Mamet’s canon, citing the American playwright as one of his earliest and most significant inspirations. Johnson saw the original world premiere of Glengarry Glen Ross at the National Theatre in 1983, and found it ‘kind of seminal’. He says that for British playwrights, it’s Pinter who crystallizes things for everyone that came after, but in the US, it is Mamet: ‘They are both great definers of action through dialogue, and they are both remarkable and unchallenged’.

Johnson acknowledges that it will be very interesting to see how Race plays to British audiences, given that of course in the UK there is a different historical context and set of issues regarding race, especially in terms of the prevalence and awareness of Affirmative (Positive) Action, a key strand in the play. Johnson believes that Mamet might be arguing, or at least setting up the tension, that the basic white/black dynamic in America that was established via slavery, might never be resolved, and indeed even the dynamic of apology is fraught with issue.

Race is a play that requires a strong cast to deliver four very different points of view, and ultimately Johnson’s ambition for the play as director, is that people come out arguing for one character or another. Indeed, Mamet writes in his recent book, The Secret Knowledge (2011): ‘A good drama aspires to be and a tragedy must be a depiction of a human interaction in which both antagonists are, arguably, in the right’.

Part of the power of Mamet’s drama is his vigorous, refined use of language, the infamous ‘Mamet-speak’. His dialogue is written up in stylized, yet naturalistic form, incorporating emphases and attenuation, deliberate inaccuracies, overlapping, interruption, obscenity. In The Secret Knowledge, Mamet discusses being asked how he knew so much about whatever profession he was depicting:

‘The answer, if the writing satisfies, is that one makes it up. And the job, my job, as a dramatist, was not to write accurately, but to write persuasively. If and when I do my job well, subsequent cowboys, as it were, will talk like me.’

Whether or not subsequent defence lawyers will talk like Jack and Henry in Race, the skill, wit, and intelligence of Mamet’s writing in Race deliver multiple, conflicting ‘truths’ that are sure to persuade and provoke simultaneously. Here at a crucial moment in the play, Jack airs his view on race in the US:

I. Know. There is nothing. A white person. Can say to a black person. About Race. Which is not both incorrect and offensive. Nothing. I know that. Race. Is the most incendiary topic in our history. And the moment it comes out, you cannot close the lid on that box.

Race opens on the Main Stage on 23 May and runs until 15 June.