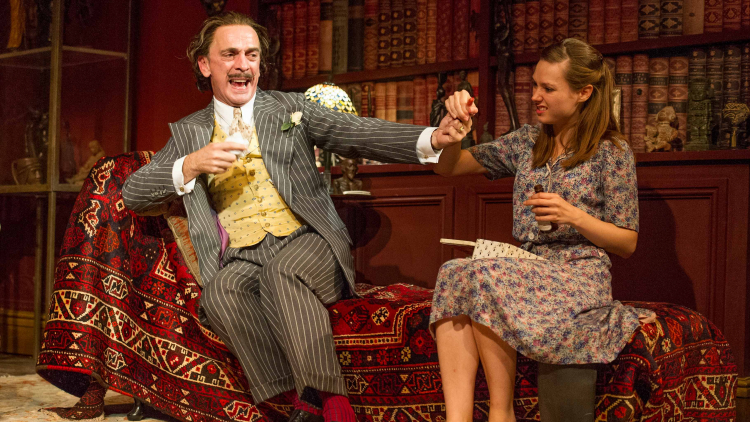 “This is my study,” insists Sigmund Freud to a half-dressed young woman who has forced her way into his Hampstead home, “not some boulevard farce.” How wrong can a guy be. And it’s not the last time in Terry Johnson’s play that the father of psychoanalysis isn’t as on top of things as he’d like to be. Psychoanalysis is all about the uncovering of buried secrets. So is farce. So what a stroke of genius to turn Freud’s last moments at his Hampstead home in 1939 into a mix of slapstick, psychodrama and memory play that’s sometimes hilarious, sometimes sobering.

Johnson’s revival of his own 1993 farce arrives here, just round the corner from its setting, after a successful run at the Theatre Royal, Bath, last year. And as Antony Sher’s ailing Freud sits alone at the start in his warm, book-lined study, Lez Brotherston’s design looks remarkably authentic.

What ensues mixes the truthful with the remarkably inauthentic. Yes, Salvador Dalí did meet Freud in London once — but he never ended up trouserless and unconscious in his host’s closet. Did Freud really deliver deft one-liners about his rival, Jung, “that Swiss nitwit”? Was his one regret in life his recent visit to see Ben Travers’s farce Rookery Nook? Or is the stage actually a cauldron of regrets, even when he angrily defends his theories against Jessica, the (fictional) young woman who claims that her life has been blighted by them?

Johnson’s plays often make merry with real-life characters: Alfred Hitchcock, Marilyn Monroe, the Carry On team. This one is weird and wonderful in a manner entirely its own. It’s sublimely silly one moment, supremely serious the next. And just when you’re thinking that it really should make up its mind what kind of play it wants to be, it delivers a knockout ending (the less you know the better) that explains the anomalies.

You need a great cast to bind these lurches in tone, and Johnson has got just that. When the farce kicks in both Sher (extraordinary) and David Horovitch as Dr Yahuda (a real figure, made into a farcical inquisitor figure) quietly go up a gear without losing any seriousness. Lydia Wilson as the interloping Jessica is posing, preposterously, as Dalí’s wife one minute, making a heartfelt attack on Freud’s integrity the next. And Adrian Schiller’s Dalí, on a doomed mission to get the great man’s seal of approval for Surrealism, is so sincere in his ludicrousness that he brings a note of joy to even the darkest moment. It’s a Möbius strip of the funny and the painful, the scholarly and the dreamlike. All that, and a great Freudian slip joke too.