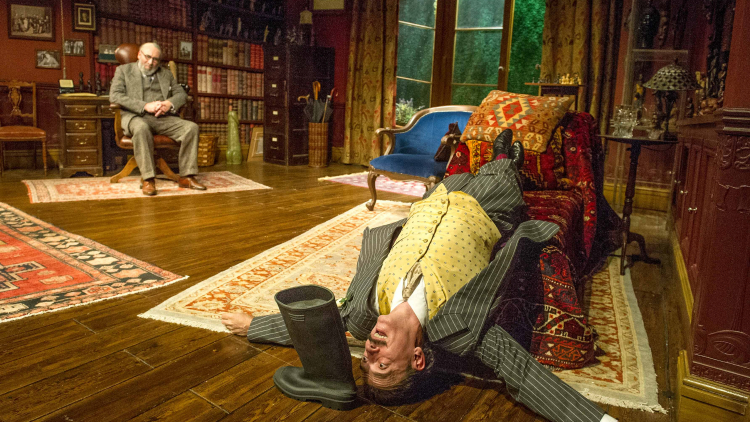 Terry Johnson’s delicious farcical three-way involving Sigmund Freud, Salvador Dali and the dysfunctional daughter of an abused mother is not only unusually funny, but tenaciously unusual.

Antony Sher, hilariously weighing each line with the laboured intensity of a man charging much more than a penny for his thoughts, is a haunted, hunted Freud on the brink of death (cancer of the mouth was eating into him), attended by David Horovitch’s lugubriously straight-faced Jewish doctor Yahuda.

Dali as a walking bundle of tics, anxieties and sexual neuroses – he didn’t paint the Great Masturbator for nothing – is just about right, and Adrian Schiller is a joy to watch as the lunacy escalates around him, as if he had nothing to do with it. And Lydia Wilson skilfully treads a fine line between vulnerable patient and avenging harpy in her Freudian slip.

The famous Stoppardian tableau of the bicycle pump, the Wellington boot and Anna Freud’s knickers embroils all three iconic characters in a sculpture that suggests the Freud museum in Hampstead is turning into the Dali museum in Figueres. For this is the ultimate farce as a dream play, and Sher’s compelling, distraught protagonist, wild-eyed, bearded and heavily accented, is his own worst nightmare. Great stuff.