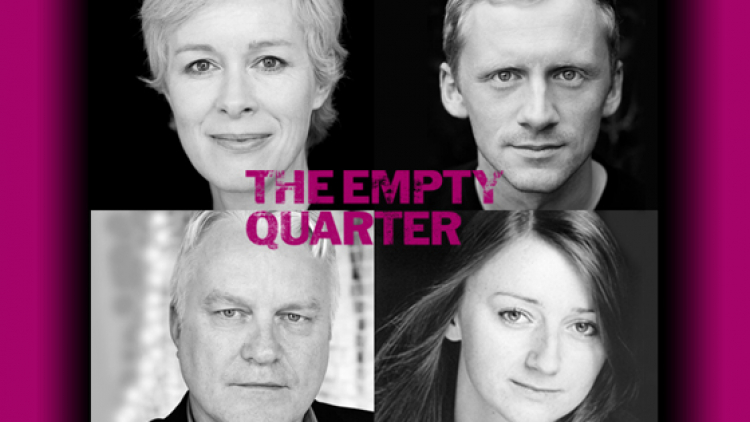 Hampstead Theatre is delighted to announce full casting for The Empty Quarter, Alexandra Wood’s Downstairs debut, directed by Anna Ledwich. The cast is Geraldine Alexander as Gemma, Gunnar Cauthery as Greg, David Hounslow as Patrick and Jodie McNee as Holly.

‘There’s a lot wrong with this place. But no where’s perfect.’

Dubai seems to offer British twenty-somethings, Greg and Holly everything they could want: tax-free income, a brand new apartment and an exotic landscape waiting to be explored.

But surviving on the edge of a desert in a society they don’t understand proves more difficult than they could have imagined. In need of help they turn to fellow expats Gemma and Patrick but soon start to question why it is they came, and whether they’ll ever get home…

Alexandra Wood’s new play studies the challenges of living in a foreign land, and where or to whom we belong. Winner of the George Devine Award 2007 for most promising playwright, Wood is currently Paines Plough’s Big Room Playwright-in-Resident. Her previous theatre credits include an adaptation of Jung Chang’s Wild Swans (Young Vic), The Eleventh Capital (Royal Court) Unbroken (Gate Theatre) and contributed to Decade (Headlong).

Geraldine Alexander’s credits for Hampstead Theatre include For Once. Her other credits include Strange Interlude and Pillars of the Community at the National, Plain Dealer and The Plantagenets at the RSC; The Welsh Boy at the Ustinov Studio, Bath; In Praise of Love at the Royal and Derngate, Northampton; State of Emergency at the Gate. Television credits include Quick Cuts, Shetland, Case Sensitive, Any Human Heart, Law & Order UK, EastEnders, Casualty, Dance to the Music of Time, Bomber and Midsomer Murders.

Hampstead Downstairs is an essential part of Hampstead Theatre and its programming. Under Artistic Director Edward Hall and Executive Producer Greg Ripley-Duggan this small studio space has been used to nurture work-in-progress, and the shows are as produced to the highest standard that their very small budgets allow. The work is presented free from commercial pressures and without ‘official’ critical assessment, but in front of a paying audience who influence the future of the work by offering feedback both in the theatre and on social media. The aim is to identify and develop plays which might have the potential to move to our Main Stage or to larger stages elsewhere.