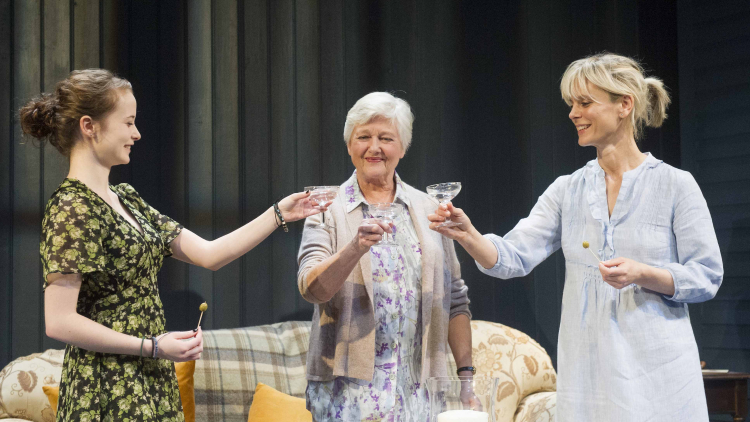 It was the biggest involuntary explosion of disbelief I’ve ever heard in a theatre: on the first night of Gina Gionfriddo’s satirical feminist play, a husband tells his estranged wife, whose former room-mate and best friend he’s been living with, that he wants to come home.

“What?!” exclaimed a lone female voice in the stalls, and it stopped the show. If I learn that she was a plant, or a friend of the production team, I’ll be very annoyed (and surprised); this was, I think, an authentic expression of shock and condemnation.

And it showed how very well the American playwright Gina Gionfriddo had wound up her dramatic debate on the politics of pornography and the intellectual history of feminism in the complex, shifting lives of her characters.

The husband in question is Don Harper (Adam James), an academic on a New England college campus who’s settled for a life of ease as a disciplinary dean. He and his wife, Gwen (Emma Fielding), are welcoming Gwen’s oldest friend, Catherine Croll (Emilia Fox), into their back yard after an interval of twelve years.

In that time, Don and Gwen have had two children and Catherine – a lipstick feminist in tight pants and killer stilettos – has written books with long titles about the cultural history of sex and women’s rights; she’s staying in town with her mother, Alice Croll (Polly Adams, whose accent is pure Home Counties with a tinge of posh Boston), and giving some classes.

There are two unlikely plot twists, soon forgotten when things start hotting up: first, Gwen is taking the classes in her mother’s apartment; second, the first (and only) two signatories for sessions on the relationship between Vietnam, 9/11 and the consequent glut of horror and slasher movies, are Gwen… and the babysitter.

That babysitter, 21 year-old Avery Willard, is the clear voice of frankly expressed home truths in matters of sexual politics that are stitched and starched into the lives of her seniors. And she’s blisteringly well played by Shannon Tarbet, cutting through the middle-aged breast-beating like a knife through butter.

The production by Gionfriddo’s regular director Peter DuBois – the two of them collaborated here on the sulphurously funny Becky Shaw at the Almeida exactly three years ago – soon settles into a proper rhythm, and the performances find support in the springy, barbed dialogue of their exchanges.

Not the least of the play’s achievements is to make these arid and over-familiar concepts of feminism come alive in a dramatic construct of character and emotional crisis. It’s a fine comedy, very well designed by Jonathan Fensom, and a gripping one, as the audience response, both isolated and collective, made abundantly clear on opening night.