Building The Mystae: An i... 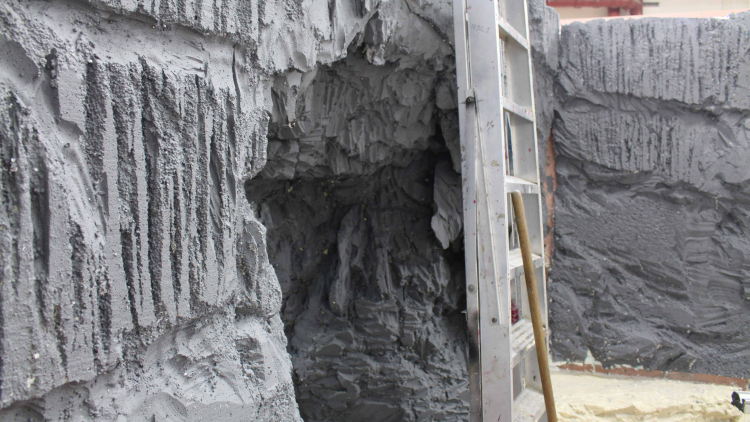 Three young friends in a Cornish cave, cut off from the world by the tide, re-enacting an ancient Bacchanalian rite. As the saying goes – what could possibly go wrong? The Mystae is a funny, tender, occasionally unsettling coming-of-age play, written by Nick Whitby (Smack the Pony, The Complaint). It explores a tightly knit friendship between three people facing the uncertainty of a future that might not involve each other. All the action takes place in a cave, where the entrance slowly fills with seawater. At one point, one of the characters must dive into this cave entrance when it is fully submerged. With the watery exits, the re-enactment of mystical, hallucinogenic rites, and its cave setting, The Mystae requires a spectacular set, and I’ve come to talk to designer Georgia Lowe about her vision for the production.

Lowe has brought a scale model of the set to show me, featuring a convincing cave, which will dominate the space in the Downstairs auditorium. She places her phone to one side of the model, using it as a torch to display how the lighting will work. Even a very small amount of light, entering from the side of the beautifully-detailed model, dramatically alters it, conferring shadow and atmosphere: a place where strange and wonderful things could happen. Lowe and the director Tim Carroll agree that in such a naturalistic set, all the lighting on stage should also be ambient, issuing from intrinsic elements of the drama, such as the fire the friends build, and available daylight from chinks in the walls.

The audience will sit facing what is almost a viewing ‘window’, working like a section slicing through the cave. In effect, this staging will operate as a traditional proscenium arch formation, but will feel anything but traditional. Lowe and Carroll decided to limit the breadth of the auditorium seating in order to convey an impression that the cave ‘continues beyond what the audience can see’, hinting that the cave’s old mining tunnels (‘adits’) disappear off in different directions.

When she first read the play, Lowe saw that there would be a number of potential ways to design it: ‘You could go down the immersive route (building a cave that the audience sits within) or do something very abstract, and light it starkly, in a stylised way. But I was really excited by the approach we chose, because it is rare for me to go down a completely naturalistic route.’ Although Lowe has designed proscenium arch pieces before, she works more often in flexible spaces, where the audience can sit or walk through the set. For Amphibians by Steve Waters, a play about Olympic swimmers, she utilised a Victorian swimming pool under the stage of The Bridewell Theatre, placing audience and action inside the transformed pool cavity.

However with The Mystae, Lowe and Carroll agreed that although it might have been valid to design an immersive set, the play was actually very much about the three friends feeling cut-off from the world, thus being liberated to enact the full experience with all of its consequences. With this in mind, they wanted to achieve a sense of the audience looking in on the action, believing the characters’ isolation. However, as Lowe points out, watching The Mystae will still feel immersive and experiential because of what she calls the ‘elemental’ aspects of the production: it will be dark; there will be a real fire on stage; and of course there will be lots of water.

Ina, Holman and Tre can only enter the cave through a seawater entrance, where water ebbs and flows with the tide, so Hampstead Theatre commissioned a water tank to be built especially for the show, which will begin to fill when the first character enters the cave. The water level will start at knee-level and will then rise. To exit the cave at high tide, one of the characters has to dive into the tank and swim through it. The intention is that when the water fills to the maximum level at high tide, it will seem that the characters are completely trapped by the sea.

‘What is really great about this space and Hampstead Theatre, is that very rarely does a designer get to experiment in this way. You’re often being told things are too expensive, or more frequently, that you can’t limit audience capacity. But Hampstead are great at supporting a more experimental approach. It was the same with the last show I did at Hampstead, Ignorance in 2013.’

Georgia Lowe was a 2011 finalist in the prestigious Linbury Prize, a competition that offers graduates a chance to design a production for a presenting arts organisation. The Linbury attracts hundreds of competitors, offering a rare entrée to an industry besieged by talented people. An exhibition of the finalists’ work is staged at the National Theatre, orchestrated by Linbury founder and influential scenographer, Professor Pamela Howard OBE. Lowe comments that it was a wonderful opportunity for her to showcase her work to directors and broker lasting relationships. It is perhaps a mark of Lowe’s intelligent and thoughtful approach to design that after the Linbury and a stint as a trainee designer at the RSC, she has worked continually, designing productions at the Almeida, Soho Theatre, the Finborough, and Arcola amongst others.

While she very much enjoys the challenge of immersive theatre design, it was refreshing to work on The Mystae with its powerful and suspenseful story. She describes her approach as quite ‘directorial’: ‘I read the script many times to get it into my system… Then I storyboard the action, which may have no relevance to what the director is doing, but helps me imagine the actors’ movements.’ In this case, the movement of the actors around the cave will be properly exploratory in the first few days of production, given the short lead times for getting the immense set into place before the first night.

The setting of the cave and the fact that the characters are trying to re-enact what they believe to be an ancient Greek ritual could in some ways lend the action an almost timeless feel, if it were not for the fact that the solemnity is disrupted by inappropriately contemporary substitutions, such as a Power Rangers figure and a Ginsters pastie. The atavistic ceremony that Ina wants to re-create releases a process of catharsis in all three of them, which is sometimes very funny, but at other times disturbing. Whitby’s play could be read as a take on young people seizing an outlet for purging primal emotions, in a way that they cannot achieve conventionally.

When I ask Lowe for her interpretation of The Mystae, she says, ‘It’s about secrets, about your deepest desires, and relationships and the future. And different people’s ways of imagining that.’