Sunny Afternoon: ★★★★ from The Independent 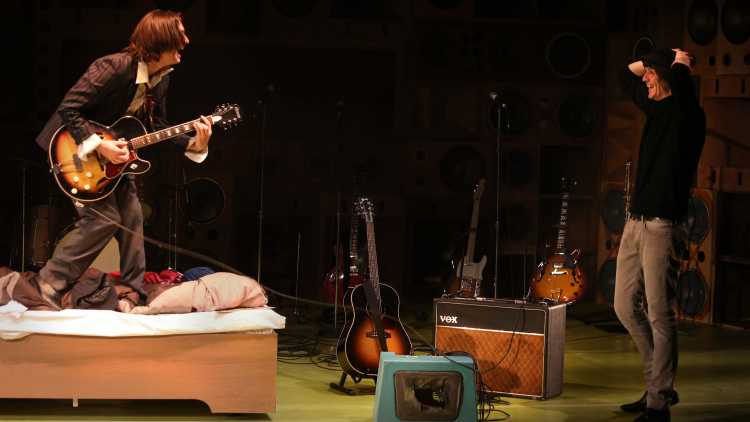 No one needs another jukebox musical, least of all The Kinks. Joe Penhall and Ray Davies instead offer the biography of a strange and unruly band, uncovering the pressure points, business decisions, triumphs and disasters behind Davies’s writing of England’s most painfully truthful songbook.

The hits are gloriously here, as well as judiciously used later songs from the Seventies, when life was beginning to hurt for Ray and his brother Dave. But the suffering and stupidity that went into them is present too. This is the painful, often very funny story of how jukeboxes are filled.

With a giant studio as his basic set, Edward Hall’s direction makes full use of a walkway through the stalls, where Sixties “dolly birds” gleefully scream and twist, and Ray (John Dagleish) wanders for sung soliloquies. Dagleish portrays Ray in a wide-eyed daze, with a hint of a nervous stutter, in permanent, perhaps traumatised shock at having become a pop star. He’s not always forceful enough to be the concert Ray, but finds the private heart of Sunny Afternoon’s co-author. George Maguire’s Dave, by contrast, is the play’s pill-popping, cross-dressing life-force, and the essence of the younger Davies in his prime.

The Kinks’ music is ideally suited to musicals, because writing songs was often how the brothers spoke to each other. This sort of communication is shown most movingly when Ray, lost and lonely in America, sings “Sitting In My Hotel” down the line to his young wife Rasa back home in north London, and she answers with “I Go To Sleep”, the ballad Ray wrote while worriedly waiting for news of their daughter Louisa’s birth. This juxtaposition has the blindsiding, tearful power of The Kinks’ best music. That music’s other side is shown at the end of their doomed 1965 American tour, when the band form a protective line in their red hunting jackets, and sneer at the circling music business authorities: “I’m Not Like Everybody Else”.

Penhall’s conversations with Ray as they collaborated gifts him intimate lines which are clearly the singer’s own. When Dagleish’s Ray remembers the death of his sister Rene on his 13th birthday, straight after she handed him his first guitar, it has trance-like intensity. The making of “Waterloo Sunset” is another sort of dream, leading into “Lola” and a climactic, exhilarating mini-concert. It is a better ending than The Kinks managed in life, an alternate reality in which bassist Pete Quaife and Ray’s wife Rasa never left. In The Kinks’ 50th Anniversary year, this feels like a new, vital work by them.