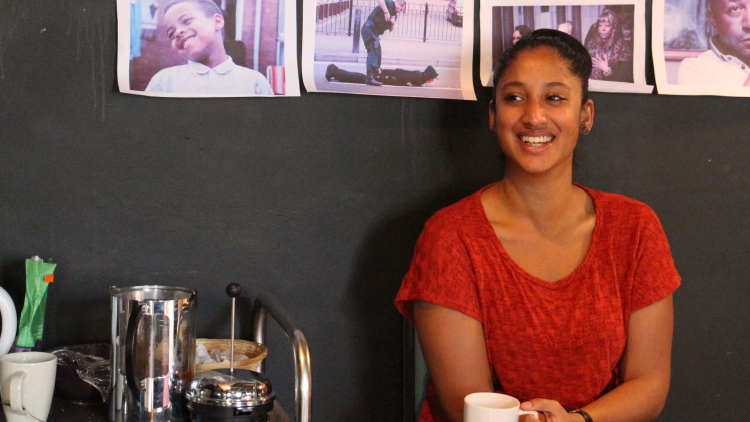 Can you describe State Red in a nutshell?

State Red is about a boy who is not sure what he should put first: the truth or his family.

What inspired you to write State Red?

The question ‘who polices the police?’

“There was no coconut, there was no ‘do it’. This isn’t a Nike advert…There was no time for that – we‘re talking a matter of split seconds.”

(In order of birth, not preference) Arthur Miller, Dael Orlandersmith and David Lindsay-Abaire.

I will answer this question by unashamedly nicking an Arthur Miller quote: “I think the job of the artist is to remind people of what they have chosen to forget.” I can’t find its source so it might just be one of those memes made up by an internet genius but it sounds Millerian enough and pretty profound to me. I think the playwright has a responsibility to tell a story that they know wouldn’t otherwise have seen the light of day – which more often than not means it’s a difficult, uncomfortable subject. I also think the playwright should both intellectually stimulate and emotionally gut their audience – it’s not enough to do one or the other. People read the papers on one day and by the next it’s forgotten. If a playwright humanises a headline and does it well, the audience is much more likely to care and remember that ‘issue’. On the flipside, we can all cry watching a soap opera that genuinely pulls at our heart strings but if there’s no substance behind it, it gets left behind in the dustbin of story.

Good People by David Lindsay-Abaire. It looked at poverty, capitalism and the American dream (or lack thereof) and condensed it all into intensely funny, sad, believable characters. I laughed out loud, I wept, I was transformed. But I also wish that I wrote All My Sons, Topdog/Underdog and Yellowman. I’m greedy like that…

Can I have three? (That’s not the advice – though it might be a useful way of getting through life):

2. “Don’t get it right, get it written”, the brilliant Roy Williams who has been a mentor to me since 2006. This is his antidote to writer’s block.

3. I know Anne Robinson isn’t known for being a font of wisdom but I read once that she said that she doesn’t (and therefore, implicitly, we shouldn’t) despise anyone because “no one should live rent free in your head”.